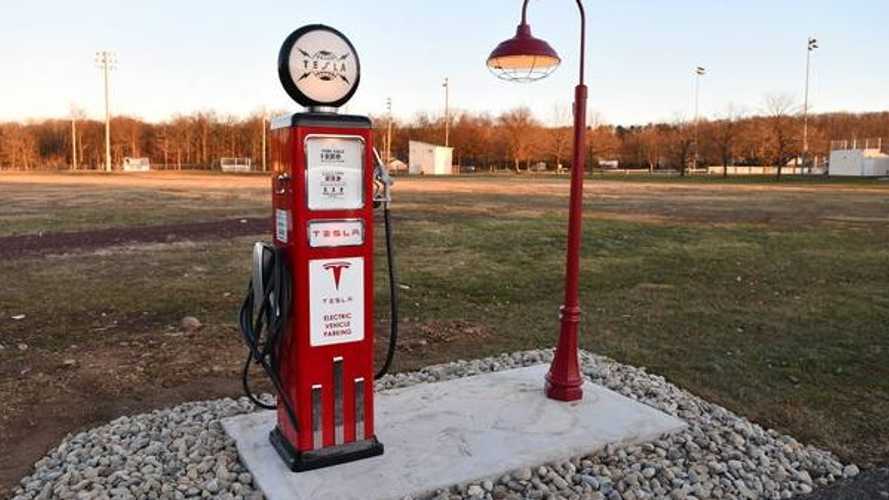 A mix of retro styling and the future of autos.

The Inside Scoop ice cream parlor in Coopersburg, Pennsylvania is a unique destination. The owners, Tony Caciolo and family, also have a unique taste when it comes to their design aesthetic — they love the throwback retro style from the 1950s but they also love futuristic, next-generation Tesla electric cars.

Mr. Caciolo has set up a distinctive Tesla destination charger outside his ice cream shop, mirroring a vintage-style gas pump — even featuring the mechanically rolling price and quantity counters. Sure, he's kept the word 'Gallons' instead of 'kW' on the stalls but it's still really cool.

Above: The retro-style Tesla Destination Charger at night located at The Inside Scoop ice-cream parlor (Source: theSpy69/Tesla Subreddit)

This particular photo was posted on Reddit by theSpy69 and it's still gaining traction on the forums and all across social media. It turns out that Tony Caciolo's 'The Inside Scoop' is visited by around 100,000 visitors a year according to his interview with Inverse.

The design of the Tesla logo on top of the charger is also modified in a vintage style and the lamp post beside the charger also takes the imagination to a bygone era.

Tesla CEO Elon Musk is also a fan of this old-school style. Last year he explained (via Twitter) his intentions to design one of the company's Los Angeles Superchargers in a vintage-era theme including an 'old school drive-in, roller skates & rock restaurant' but Model 3 production must have diverted his attention away from giving this initiative priority at Tesla. Nevertheless, we're hoping to see something like this at Tesla Supercharger stations soon!