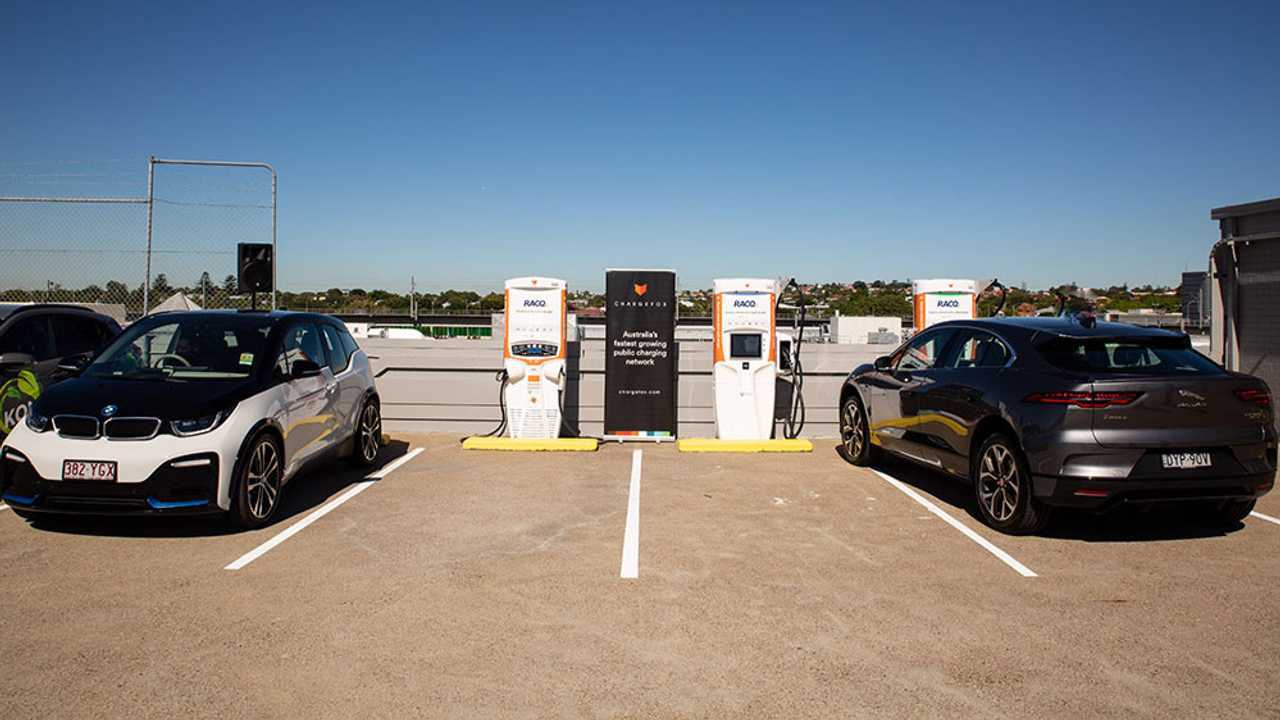 Australian manufacturer Tritium, which has become one of the major DC fast charging suppliers around the world, recently installed its first Veefil-PK 350 kW chargers in its home market.

"The two 350kW chargers installed at the Toombul Shopping Centre can charge two cars simultaneously and are equipped with CCS2 plug types. Considered the most advanced charger in the world, the Veefil-PK can add up to 400km of range to an EV in just 15 minutes, or 200km in eight minutes. "

350 kW chargers are accompanied with Tritium Veefil-RT 50 kW charger, which can charge both CCS Combo 2 and CHAdeMO compatible cars.

“The new charging station is an important step in connecting electric vehicle drivers in Brisbane to the latest and fastest charging infrastructure. Chargefox is committed to helping Australia transform from being a global laggard in transport innovation to having only the third ultra-rapid electric vehicle charging network in the world. Our new Brisbane station at Toombul Shopping Centre is the next stepping-stone on our journey to connect Australia’s major cities for the thousands of drivers using efficient, clean electric vehicles.

“These are the first Tritium ultra-rapid chargers installed in Australia, and brings together world class products from two Australian businesses. This is a first in Queensland and revolutionises the EV public charging experience for all drivers.”

“The deployment of the Veefil-PK brings Australia in line with other regions across the globe such as Europe where these chargers are being rolled out by the hundreds across the continent. This is the next step towards Australia eliminating range anxiety and enabling true range and energy freedom.

“With EVs now on Australia’s radar, its thanks to network operators such as Chargefox that Australians can feel comfortable driving wherever and whenever they want.”

"Tritium, a world leader in electric vehicle (EV) DC fast charging technology, has opened its state-of-the-art research and development (R&D) centre, the largest of its kind in the world and the global centre for Tritium’s facilities in Europe and North America.

The Tritium E-Mobility Innovation Centre in Brisbane, Australia, is part of a major expansion of Tritium’s headquarters. The shift to the new facilities will help increase production rates and allow for much faster time-to-market, while further enabling the rapid development of technologies which will continue to shape the EV roadmap worldwide.

James Kennedy, Chief Technology Officer and co-founder, Tritium, said the recent expansion of the company’s engineering and research capabilities made the construction of the Innovation Centre a necessity. “By the end of 2018, we were adding an engineer to the team every week, on average,” said Kennedy. “In engineering circles, this growth rate is unheard of. But as Tritium continues to expand, this rate of growth is absolutely necessary to cater to demand for DC fast charging and high-power charging.”

The new headquarters is home to expanded R&D and engineering, support, sales and marketing teams. Tritium now employs more than 300 people globally, with the R&D and engineering teams the same size as their executive, sales and marketing teams combined, ensuring innovation remains at the forefront of the company’s ethos. The new facility and laboratory will allow for the development of new and disruptive technologies which will continue to set the pace of innovation in the EV charging infrastructure sector.

In 2014, the company unveiled the Veefil-RT 50kW DC Fast Charger, the most advanced charger in its class and one which changed the design paradigm for charging infrastructure across the globe – and which has now been installed in 29 countries and counting.

In the past 12 months, the company unveiled the most powerful DC charger in the world, its flagship Veefil-PK 350kW DC High Power Charger. The chargers are being rolled out across Europe as part of the IONITY network and can add 350 kilometres or 220 miles of range to an EV in just 10 minutes. The chargers are known to be the most powerful in the world, but Tritium has already begun working on technology which will push the Veefil-PK and EV charging even further ahead.

Thanks to a grant of a portion of the US$3.2 million awarded to the Electric Power Research Institute (EPRI) by the Department of Energy in the United States, Tritium will use the R&D facility to develop an extreme fast charging system that can connect directly to the grid. EPRI allocated about US$400,000 for Tritium to develop a custom version of its Veefil-PK high-powered charging head, along with providing input for system design and testing.

“This is one of several research projects we have on the agenda,” said Kennedy. “We’re also working on technology which will enable our concept of Energy Freedom™ to become a reality in the very near future. By pushing the boundaries of innovation in infrastructure, we’ll continue to re-define the possibilities for E-Mobility and pave the road ahead for the EV sector.”"

The company also announced the opening of its Tritium E-Mobility Innovation Centre at its facilities in Amsterdam.

The Centre is located in the heart of Europe’s automotive industry and allows manufacturers to test vehicles for DC charger interoperability, particularly with Tritium’s Veefil-RT 50kW DC Fast Chargers and Veefil-PK 350kW DC High Power Chargers, at no cost to the manufacturer.

“The European Centre was developed with the needs of the European Automotive industry in mind and it’s now being used by OEMs on a daily basis,” said Kennedy. “Previously, testing had to be carried out at various automotive festivals, or we would have to deliver temporary chargers across borders, in some cases to manufacturers, and seek their return at a later date. The process was cumbersome and hindered innovation.

“With the new Innovation Centre, automotive OEMs now have a base in Europe at which they can work alongside Tritium engineers to solve issues and develop and test all aspects of battery and charger interoperability, including communications and other technical advances inherent in the next wave of EVs.”

Since the opening of the Centre in February, Tritium has tested its chargers for compatibility with five automotive brands, as well as electric truck and bus manufacturers. This will effectively shorten the development and time-to-market for various new electric vehicle models.

“This allows us to test advances in charging technology, such as vehicle-to-charger communications, vehicle-to-grid or bi-directional charging, support services and more,” said Kennedy. “The Centre is uniquely placed in the heart of European automotive innovation to ensure we can work with the industry to accelerate the development of new EVs and the next wave of charging infrastructure needed to power them.”

The state-of-the-art ultra-rapid charging station can charge two cars simultaneously, delivering up to 350kW and 400km of charge in 15 mins (or 200km of charge in 8 mins) and is backed up by 100% renewable energy. The station also has one Australian made 50 kW fast charger, which can deliver 60 km per 15 minutes.

Marty Andrews, Chargefox CEO, said, "Chargefox has a vision that one day 100% of road transport will be powered by renewable energy and that our ultra-rapid chargers will be accessible to all Australian drivers. The Chargefox Toombul station opening brings us another step closer in making this vision a reality for all Queenslanders."

"Motorists deserve choice and that’s why we’re so happy to be part of this project – we need to ensure EVs are part of the fleet in Queensland now and into the future. While EVs are far better than they used to be, range anxiety is still a barrier for some drivers. We want to help Queenslanders overcome that, so the Brisbane ultra-rapid charging station is going to be critical" Dr Michael said.

With an additional 19 ultra-rapid charging stations in development by the Melbourne-based start-up, the Chargefox network will connect Brisbane, Sydney, Canberra, Melbourne and Adelaide, as well as having stations in Western Australia and Tasmania by the end of 2019. This will make electric vehicle charging faster and easier for all Australians and support efforts to bring Australia’s vehicle emissions in line those of the USA and Europe.

Andrews continues, "Ultra-rapid charging is the future and a game changer for all EV drivers and Australian’s who are considering switching to EV’s. Since launching, Chargefox has processed over 25,000 charging sessions on more than 350 plugs across Australia and New Zealand, dispensing a total of over 190MWh of electricity - that's enough electricity to power the average household for a decade."

Tim Weale, Mirvac Retail National Manager for Retail Solutions said, "We're thrilled that the Toombul shopping centre is now home to Australia's fastest EV charger. As the first shopping centre in Australia with Chargefox ultra-rapid chargers, we anticipate strong demand for the service from our customers, who will be able to conveniently charge their car whilst enjoying our shopping, dining and leisure experiences."

Andrews concludes, "We’re helping Australia transform from being a global laggard in transport innovation to having only the third ultra-rapid electric vehicle charging network in the world. Our new Toombul station is the next stepping stone on our journey to connect Australia’s major cities for the thousands of drivers using efficient, clean electric vehicles."