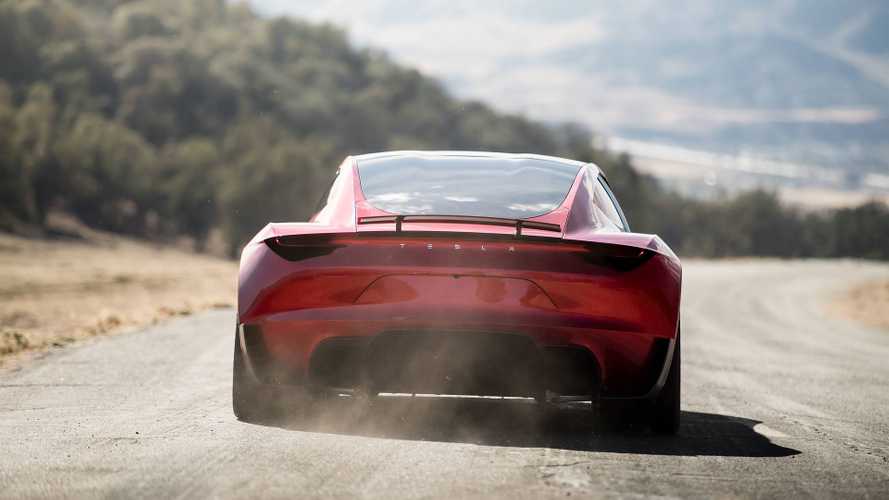 What are they good for?

Elon Musk has said that Tesla will offer a special option with SpaceX cold gas thrusters on the upcoming Roadster. So, why not calculate the improvement in zero-to-60-mph time? Musk said:

“Will use SpaceX cold gas thruster system with ultra high-pressure air in a composite over-wrapped pressure vessel in place of the 2 rear seats.

How much do we pick up in acceleration times with these thrusters?

Before we get to that, let’s briefly discuss thrusters.

Example of a thruster on SpaceX Falcon 9 stabilizing rotation of booster prior to landing. Photo courtesy SpaceX see footnote*

A cold gas thruster is a very simple device. All it does is eject a high-velocity stream of gas. Tesla and the space industry in general use these devices for controlling altitude, roll etc. of spacecraft where small amounts of thrust are needed. Cold gas thrusters are fairly inefficient devices.

If you want more thrust per unit of mass flow you usually start mixing in a fuel of some sort ... but fuels are out for this app. You don’t want hot gasses shooting out the back and front of your car due to safety reasons.

A Closer Look At The Upcoming Tesla Roadster

A lot of you are probably already thinking you don’t want these thrusters for any reason, hot gas or not. The whole thing is silly.

But, there may be some situations where these thrusters actually DO make sense. We will get to that in a bit. First, let’s go through the calculations for how much 0-60 and 0-100-mph time we pick up from the thrusters.

As mentioned, we need to know the specific impulse of the thruster. Wikipedia quotes 75 seconds as the top end for a nitrogen thruster. We used 60 seconds for our calculations.

The calculated thrust is simply the specific impulse times the mass flow rate. Once we have the thrust we can use our performance program for the Roadster and just add that thrust to the thrust of the front and rear axles and recalculate the acceleration time.

All we need is the mass flow rate of the thruster and we can calculate the thrust provided by these cold gas thrusters. To get the flow rate we assumed we had 100 lb of air (mostly nitrogen) to expel in five seconds. That’s 20 lb/sec mass flow rate. The thrust provided from 20 lb/sec calculates out to 1,200 lb. So we added 1,200 lb. forward thrust to our performance program and recalculated the acceleration rates.

Is it worth it or is it all just silly?

Well, first of all, there won’t be one huge thruster in the back. As Elon said, there will be around 10 thrusters placed around the car. Let’s say three in the back, three in the front and two on each side (one in each corner to get better control around corners).

Think about it. 400 lb. thrust would probably make a pretty significant improvement in cornering ability.

Once again you say ... "that’s silly." I’ll just use torque vectoring in the wheels. I don’t need these thrusters.

Now we get to where these thrusters are probably meant to do their job:

How about cornering? Do you think it would be possible to exceed the tire’s traction limit around a corner?

How about braking? Is it possible you could exceed the traction limit during braking?

Now we know why these thrusters are not as silly as some might think (let’s exclude the flying part).

*Editor's note: This article was put together as a collaboration with Keith Ritter (HVACman).

*Footnote: There’s a video of this event here. You can see the Florida coastline. This was a cargo dragon successful launch but 1st stage booster grid fins failed on return and the booster landed in the ocean. Very impressive because the severe rotation caused by the grid fin failure was stopped just in time, legs extended but unfortunately in the ocean and then towed back to port.