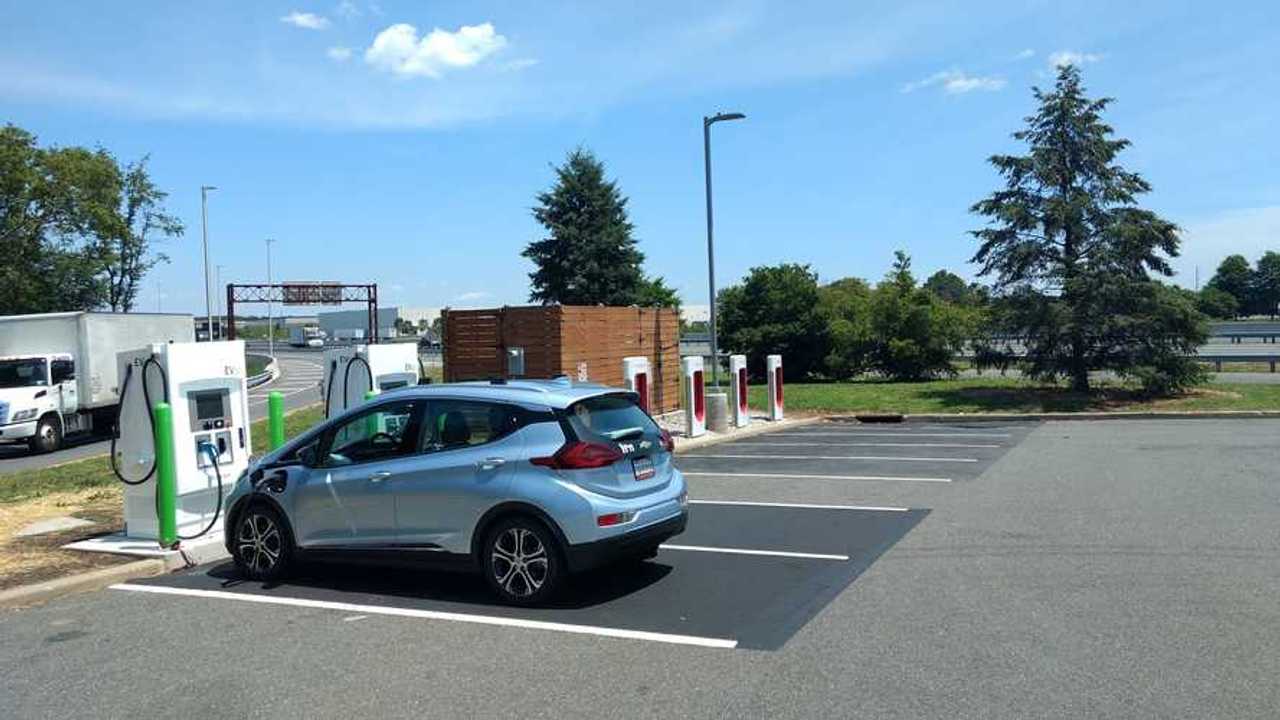 Charging my Chevrolet Bolt EV at a Tesla Destination charger via adapter.

I just passed my one year anniversary owning my Bolt EV, and during that first year, I put over 15,000 emission-free miles on it. Rarely being affected by range anxiety due to the  238-mile range, the Bolt has met about 99% of my daily driving needs. That being said, there is that remaining 1% of the time I have found my Bolt EV doesn’t quite cut it in one area: long-distance road trips in the winter.

*Editor's note: This post was originally published on bro1999's blog.

Twice this winter, I have taken road trips with the family in tow that exceeded the Bolt’s 238-mile range. I detailed the first trip in a previous blog entry, and the biggest takeaway was that a cold HV battery could significantly reduce fast charging speeds on unsuspecting owners. With knowledge from that first trip fresh in my mind, I completed another road trip (this time a 420-mile roundtrip trek to the Big Apple!). Up until a day before the trip, I was still debating whether to roll the dice and take the Bolt EV, or just suck it up and burn some gas and take my 2012 Volt. In the end, I decided to take the Bolt and give it another chance on a long distance winter road trip. My biggest worry was the aforementioned reduced fast charging speed due to cold HV battery issue, but it turned out on this trip it was a non-issue. However, other issues were experienced.

In preparation for the trip, I did everything I could to mitigate the “too cold for peak DCFC” battery temperature issue. After charging up my Bolt to 100% overnight, I turned on my Bolt and turned on the heater on and let the it “warm up” for 30 minutes before we departed. By doing this, it helps save energy for the road by getting the heater (and cabin) warmed up so the Bolt doesn’t spend the first few miles of driving using extra energy getting the heater up to temperature. Plus, I found (via my OBDII adapter and TorquePro app) that the Bolt will keep the HV battery temperature between 50-60F when ambient temps are freezing while it is turned on and plugged in (heats to 60F, then kicks back on when the HV battery drops to 50F).

Once we were ready to hit the road, my Bolt registered 168 miles of estimated range, a far departure from the nearly 300-mile estimates I had been observing during the warmer summer months. The cold impacts range on all EVs; even six-figure Teslas are not immune. As New York City was 205 miles away, at least one fast-charging stop would be required. During the summer, I would have had plenty of range to make it to the CCS stations on the New Jersey Turnpike (NJTP) at the Joyce Kilmer Rest Area (https://www.plugshare.com/location/138286). However, being 168 miles away and having 168 miles of estimated range staring me in the face, that math told me another pit stop would be good.

Fortunately, there are two rest areas near the MD/DE border than have multiple, FREE CCS fast-charging stations. Since we still hadn't eaten lunch, the hour drive to the Chesapeake House Travel Center (https://www.plugshare.com/location/134788) would be a perfect place to stop to top off the battery and sit down for lunch. I noted that my HV battery temperature was 59F when we left the driveway, and the ambient air temp was 28F. After arriving at the first CCS charging stop, my estimated range had dropped down to 115 miles, and my battery temp had dropped to 57F. I plugged into the 100 amp max (booo) DCFC and observed the station was outputting max charge rates from the start.

After eating lunch with the family, we returned to the Bolt. By my calculations, it should have charged to nearly full. However, when I walked up to my Bolt, it was not charging. Uhoh. It turns out that, despite not being an EVgo station that is notorious for 30-minute shutoffs, my Bolt had stopped charging after 30 minutes. Thus, I had "wasted" 30 minutes of charging time. I was fairly annoyed, as there was no indication of the 30-minute shutoff, and I had only charged up to 150 miles. Luckily, my next DCFC stop was only 108 miles away, so I still had plenty of range to make the 108-mile drive.

When I arrived at my next stop (Joyce Kilmer rest area), I rolled into the charging stations that happen to be collocated with Tesla Superchargers. Three Teslas were plugged in when I plugged myself into one of the CCS stations. I had arrived with 42 miles of estimated range remaining, and since my destination was only 39 miles away, a 30-minute charge was all that was needed. After another quick restroom stop, I managed to charge up to 94 miles of range, so it was off on the final leg to NYC!

30-minute fast-charging pitstop on the NJTP

We arrived in NYC, 39 miles later, with 60 miles of range remaining. It was now 6 PM, so we went to find a place to eat dinner. After finding what is likely the most expensive parking lot in the city ($47 for 2+ hours of parking! Dafuq!) that had a charging station, I had to convince the parking attendant several times that the Blink station inside the garage actually worked. After a phone call to his boss, he was finally convinced it worked. Turns out in the 7 months that guy had been working there, no one had ever asked about the charging station. Of course, being a Blink station, it was priced at a NYC-esque 49 cents/kWh, but as beggars can't be choosers, I begrudgingly plugged in and headed off to dinner, which was luckily only a couple of blocks away. We discovered an Amazon bookstore on the way!

Parking ain't cheap in NYC. In fact, nothing is.

Two hours later after eating some amazing Korean BBQ (Kang Ho Dong Baekjeong...nom nom nom), I saw that the Blink station had added a whopping ~30 miles of estimated range, or 11 kWh of energy. Having plenty of range to make it back to the NJTP fast-charging stations, we parked the Bolt for the night and headed to the hotel for some rest.

After spending the next day exploring the city and seeing a Blue Man Group show, it was time to head home. The drive to the Molly Pitcher Service (https://www.plugshare.com/location/136391) was only 45 miles, so with over 80 miles of estimated range, we were all set.

After escaping horrific NYC traffic, we arrived at Molly Pitcher with 55 miles of range left. Home was 162 miles away, so I realized that I would need to log at least 2 full 30-minute charging sessions. While waiting for the Bolt to charge up, we entertained ourselves and the kids by watching some streamed TV shows using the Bolt's unlimited 4G LTE wifi hotspot. After one hour of charging, the Bolt stated I had 131 miles of range. That was not nearly close to the 162-mile number to home, so it looked like one more fast charging stop would be needed before we made it home.

Curious if I could actually stretch the Bolt's 131-mile estimated range 162 miles, I employed all range saving techniques I could think of. I reduced my speed to 5 under the 65 MPH speed limit, and I also toggled the heat on and off. I found that even if you turn off the HVAC in the Bolt, it will still blow warm air for several minutes until the heater cooled off. By utilizing these power saving techniques, I was actually able to get the "Max" number on the GOM to exceed the miles remaining to home. However, I decided this was one range test I was not willing to see to the end and topped off the Bolt for 15 minutes at the same MD rest area I stopped at to charge the prior day to ensure I had enough to make it home. Watching the range meter slowly tick up one mile at a time was borderline painful. With no range qualms, I took off for home like a bat out of hell.

The 420-mile road trip was complete. After looking back at the trip and what I experienced, I came to the following conclusions:

So to sum it all up, the Bolt is great for 99% of my driving needs, and likely covers the vast majority of needs of the average American. However, if you are thinking of taking a Bolt on a long distance road trip (especially in the winter), you should definitely plan meticulously (with a Plan A, and plans B and C in the back pocket) and consider whether you and your family can stomach the extra time it will take to complete a trip in an all-electric vehicle, Bolt or something else, along with potential charging pitfalls. The old saying "your mileage may vary" definitely applies.

P.S. There was one more thing I learned during my trip!