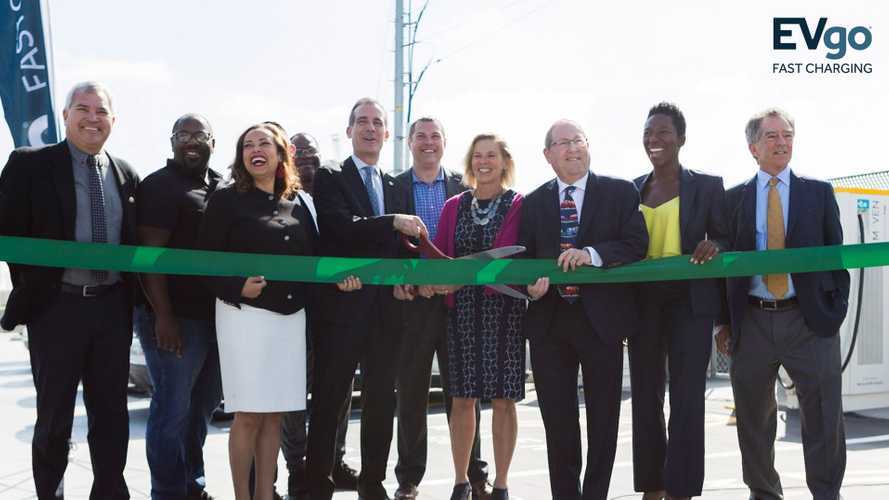 Installations of dedicated charging stations for the Maven Gig car-sharing service for freelance drivers was announced about a year ago. The plan envisions three such hubs in the LA area. Having dedicated infrastructure should enable more access for the general public.

"This new hub format enables Maven Gig EV members – who average over 125 miles per day – to have convenient, reliable fast charging where they need it and for all customers to have access to the center’s retail options, including Sprouts Market, Ashley HomeStore, CVS, and Starbucks.

“Los Angeles is a testing ground for the latest innovations in zero-emissions technology — and a proving ground for how electric vehicles can be the bedrock of a cleaner transportation network. Angelenos are ready to build a more sustainable future, and these fast-charging hubs will make plugging in and powering up an EV more practical for drivers and ride-share companies alike.”

“For nearly ten years, EVgo has been committed to electric charging for all. Our new network of public-rideshare fast charging hubs in Los Angeles is the first of its kind and will make charging quick and easy for Maven Gig members, while helping to improve access for all EV drivers across the city. We’re grateful for the leadership of Mayor Garcetti, and we’re proud to continue promoting transportation electrification in our hometown of Los Angeles and across the country.”

“For more than two years, the Maven Gig EV fleet has generated over 43 million miles, including over 15 million miles in Los Angeles. Through our partnership with EVgo, we are helping to create collaborative models to advance EV charging infrastructure for both our members and the public.”

According to a separate press release, EVgo is the first in North America to launch the Autocharge feature at its dedicated charging network for General Motors’ Maven Gig.

Autocharge (only for CCS plug chargers) enables it to authorize the users without the use of any access card or app. The charging can start instantly if only the user/car is registered in the system.

Similar functionality will be offered also by other networks using global standard ISO 15118, which was already announced by Hubject and Electrify America and by Hubject and Greenlots.

By the end of 2019, EVgo intends to offer Autocharge at all its CCS chargers in the U.S., although the press release doesn't tell us whether it means all CCS cars will be able to use it right from the start. As we understand, manufacturers of cars also need to implement Plug&Charge in cars, which means the older models will not get it.

Autocharge functionality enables EVgo registered customers to start a fast charging session in seconds without the need to open the EVgo app or swipe an RFID or credit card – saving EV drivers time and delivering a seamless fast charging experience. EVgo’s Autocharge rollout reaffirms the company’s leadership position, ahead of industry-wide implementation of the ISO 15118 ‘Plug&Charge’ standard, which is in development but not yet scheduled for launch by automakers. Autocharge is being launched on EVgo’s dedicated network for Maven Gig members and will be rolled out nationwide by the end of 2019 to all EVgo account holders with a CCS charger-compatible vehicle."

“Autocharge technology saves EVgo members time and makes fast charging as simple as plugging in and walking away. As the first EV charging network to launch Autocharge in North America, EVgo continues to build on our track record of delivering industry-leading customer experience for our members and partners.”

“This technology not only further simplifies the EV charging experience, but also eliminates much of the hassle associated with RFID-card management. We are excited to see this technology rolled out more widely, both at our dedicated Maven Gig stations, and across the EVgo public network for our members.”