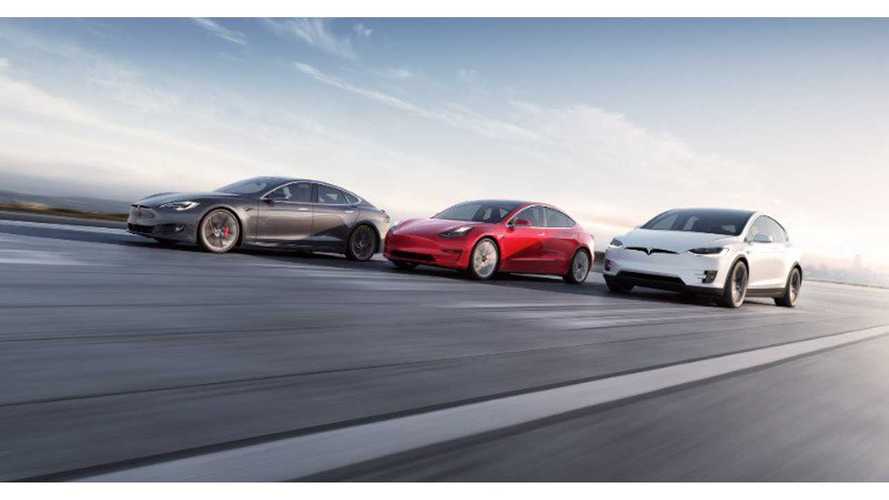 The company blames expansion to Europe and China for delivery bottlenecks.

While Tesla reported a strong and profitable finish to 2018, it definitely faced a few more hurdles in the first three months of this year, as the automaker announced Wednesday its Q1 2019 vehicle production and deliveries. In short, its sales are up over last year, but way down compared to the end of last year.

For us here at InsideEVs, we mostly focus on the sales side of the report, so let's dive right in.

Tesla reported a total of approximately 63,000 vehicles delivered globally in Q1 2019. Deliveries fell 31 percent from the fourth quarter of 2018, but Tesla says they rose 110 percent compared to Q1 2018. The automaker breaks this down for us as follows:

The automaker also blamed its expansion into Europe and China for slowdowns in getting cars from its Fremont, California factory to customers for its lower delivery figures. That may inflate Q2 numbers due in July. Tesla also attributed the push to get cars to customers by the end of 2018 to take advantage of the full $7,500 federal tax credit partially deflated Q1 numbers. While it expects its financial picture for the quarter to worsen over the last earnings period, Tesla says it still has, "sufficient cash on hand."

Basically, Tesla is still trying to align production and deliveries with demand for the Model 3, but maintains it's going to sort itself out soon and the company can continue to improve its financial picture.

Read Tesla's Q1 release in its entirety below:

Due to a massive increase in deliveries in Europe and China, which at times exceeded 5x that of prior peak delivery levels, and many challenges encountered for the first time, we had only delivered half of the entire quarter’s numbers by March 21, ten days before end of quarter. This caused a large number of vehicle deliveries to shift to the second quarter. At the end of the first quarter, approximately 10,600 vehicles were in transit to customers globally.

Because of the lower than expected delivery volumes and several pricing adjustments, we expect Q1 net income to be negatively impacted. Even so, we ended the quarter with sufficient cash on hand.

In North America, Model 3 was yet again the best-selling mid-sized premium sedan, selling 60% more units than the runner up. Inventory of Model 3 vehicles in North America remains exceptionally low, reaching about two weeks of supply at the end of Q1, compared to the industry average of 2-3 months.

Despite pull forward of demand from Q1 2019 into Q4 2018 due to the step down in the federal tax credit, US orders for Model 3 vehicles significantly outpaced what we were able to deliver in Q1. We reaffirm our prior guidance of 360,000 to 400,000 vehicle deliveries in 2019.

Given that Tesla vehicle production currently occurs entirely from one factory in the San Francisco Bay Area, but must be delivered to customers all around the world, production could be significantly higher than deliveries, as it was this quarter, when production exceeded deliveries by 22%.

We’ve just begun the global expansion of Model 3, and we want to thank our employees for their hard work and our customers for supporting our mission. We are doing everything we can to deliver cars globally as quickly as possible and look forward to continuing to scale deliveries throughout the year.

Our net income and cash flow results will be announced along with the rest of our financial performance when we announce Q1 earnings. Our delivery count should be viewed as slightly conservative, as we only count a car as delivered if it is transferred to the customer and all paperwork is correct. We count a produced but undelivered vehicle to be in transit if the related customer has placed an order or paid the full purchase price for such vehicle. Final numbers could vary by up to 0.5%. Tesla vehicle deliveries represent only one measure of the company’s financial performance and should not be relied on as an indicator of quarterly financial results, which depend on a variety of factors, including the cost of sales, foreign exchange movements and mix of directly leased vehicles.