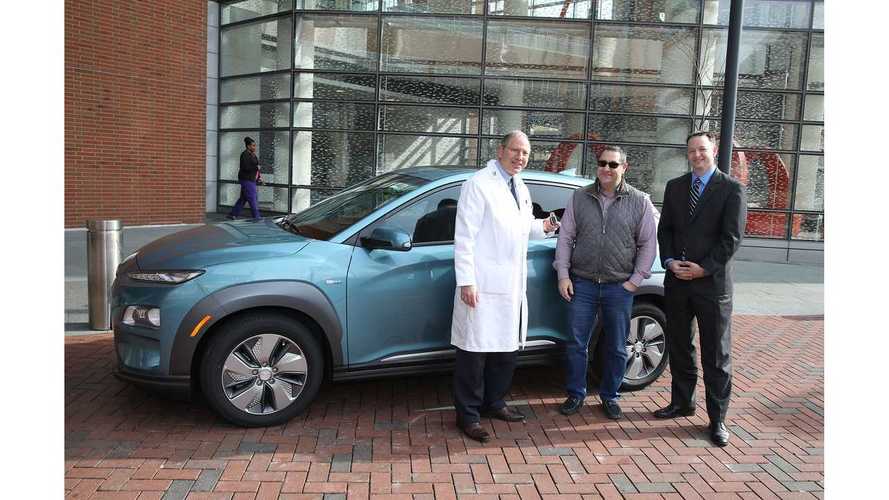 Will be powered at least partly with renewable energy.

It's finally happening. After months of watching the Hyundai Kona Electric being dispatched to other territories, the first U.S. delivery has taken place. In a ceremony yesterday, Dr. Donald Small -- Director of Pediatric Oncology at The Johns Hopkins Kimmel Cancer Center -- had his all-electric crossover handed over.

More with the Hyundai Kona Electric

More details are expected to be released soon, but if Hyundai is following the same path as in other markets, the "Ultimate" will be the first trim level available. That variant starts at $44,650, while the "Limited" begins at $41,150. The most affordable trim, the SEL package, has a base price of $36,450 .

Hyundai and Johns Hopkins have a history together. The automaker has donated over $2 million for cancer research there via its Hope On Wheels program. That includes $500,000 for grants toward pediatric cancer research this past September.

Whether this means the floodgates will open and sales will begin in the other so-called ZEV states -- California, Connecticut, Maine, Maryland, Massachusetts, New Jersey, New York, Oregon, Rhode Island, and Vermont -- remains to be seen, but we expect they will be starting shortly, if not right away. Apparently, this first shipment arrived at port about a week ago. If you're interested in the car and don't live in one of those states, it may be possible to arrange for its purchase through your local dealer. Just don't expect them to carry inventory.

While electric vehicles are, of course, more environmentally-friendly than their gas-guzzling cousins, we understand this particular Kona Electric will be going to a home that gets most of its energy from renewable sources. The doctor is not new to electric vehicle ownership, having already owned an EV for the past seven years.

If you want to follow further discussion about the Hyundai Kona Electric by owners and fans, check out its official section on the InsideEVs Forum.

BALTIMORE, MD., Feb. 15, 2019 – Hyundai marks a milestone with its first delivery of a Kona Electric to Donald Small, M.D., Ph.D., a pediatric oncologist and director of the Johns Hopkins Kimmel Cancer Center’s Division of Pediatric Oncology. An early adopter of electric vehicles, and instrumental in the installation of the plug-in station infrastructure at The Johns Hopkins Hospital, Dr. Donald Small is an advocate and leader in environmentally-friendly living practices including the use of zero-emission vehicles for better air quality to reduce health problems and symptoms related to air pollution.

“As a strong advocate for eco-friendly living—which includes doing my part to reduce carbon emissions from the energy we consume—I’ve equipped my home with 64 solar panels connected to the utility power grid, and the surplus renewable energy we produce is fed onto the grid. By implementing renewable energy generation with net-metering, we rely less on the grid and produce more than 90% of our energy use,” said Dr. Donald Small. “I’ve also been driving an electric vehicle for more than seven years, and today, I finally have the opportunity to upgrade my EV and support a quality brand that has committed over 15 years in funding pediatric cancer research.”

“Nothing makes me prouder than to hand the keys to the very first 2019 Hyundai Kona Electric sold in the U.S. to Dr. Donald Small,” said John Szymanski, General Manager, Mid-Atlantic Region, Hyundai Motor America.” We share many common values including our commitment to supporting and funding pediatric cancer research through Hyundai’s Hope On Wheels program and our joint commitment to a clean environment.”

Over the last 15 years, the Hyundai Hope On Wheels program, which funds pediatric cancer research, has provided more than $2 million in grants to The Johns Hopkins Kimmel Cancer Center Division of Pediatric Oncology.