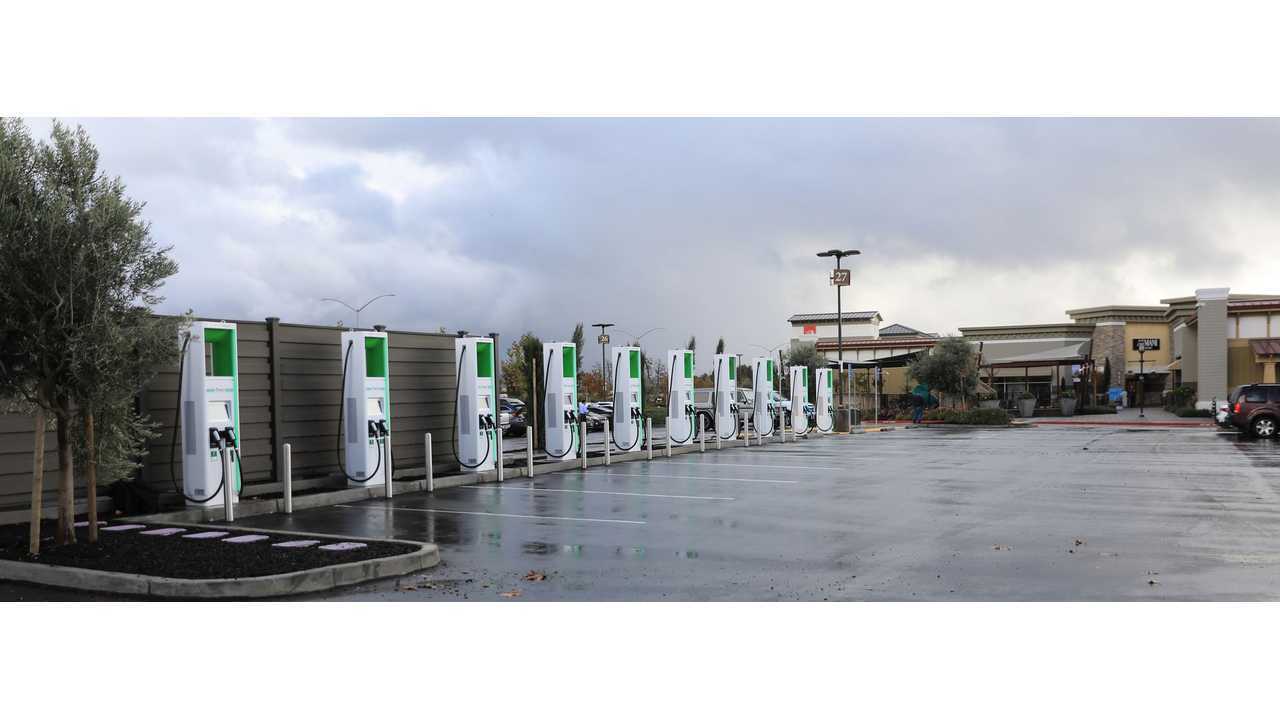 Let's take a look at the current public fast-charging situation in the U.S.

The replacement of fossil-fuel vehicles by electric vehicles as soon as possible is necessary because of global warming due to carbon emissions from fossil-fuels combustion and the finiteness of fossil fuels. In this document, only full-electric light vehicles (BEV), cars and pickups, are considered. In order for fossil-fuel light vehicles to be replaced by BEVs there must be a massive fast-charging (50-kW to 350-kW DC power) network across a country to allow long-distance BEV driving. I shall consider only the U.S. in this document.

Musk: Tesla Supercharger Network Will Expand Greatly In Europe In 2019

It is important for BEV drivers to know that fast-charging kW power is not constant after a BEV is plugged in. For example, here is a charging curve for the Tesla-Model-3-Long-Range BEV (TM3LR) charging at a Tesla Supercharger from near empty to full (100% SOC), an unlikely and undesirable occurrence:

Note that it takes about the same time to charge from near empty to 75% SOC as to charge from 75% to 100%! So, trips are faster when charging more often than charging to 100%. (Tesla BEVs take this into account when their screen shows how long to charge at a specific Supercharger.)

If such a battery is charged from greater than near empty the power peak will be less than maximum; e.g., for the TM3LR charging at a Supercharger the peak when charging from 20% full is about 90-kW instead of 120kW. Also, it is important to know that lithium-ion battery capacity is less degraded over time if those batteries are not regularly charged to full capacity or discharged to near empty.

There are three different fast-charging protocols in the U.S.: Tesla, CCS for U.S. and European BEVs and CHAdeMO for Asian BEVs. The latter two are standards for non-Tesla fast-charging stations in the U.S., with CCS as the favorite.

It should be emphasized that home charging of BEVs at 240-volts AC is a very important prerequisite for replacing fossil-fuel cars by BEVs. However, most apartment dwellers will need a fast-charging network with stations everywhere, including in cities as Tesla is implementing, for charging their BEVs.

Here is a map of the current and planned

As shown below the Tesla fast-charging network is far ahead of other fast-charging networks in the U.S. Tesla has plans to increase the power of Superchargers to 200-250-kW. Greatly adding Tesla BEVs long-distance travel are the Tesla Destination Chargers (up to 19-kW power) freely given by Tesla to hotels, restaurants, businesses, parks, multi-family residences and work-places. There are about 3000 Tesla Destination Chargers in the U.S. Here is a map of their locations:

Tesla BEVs make it very easy for Tesla drivers to find nearby Superchargers, even showing how many stalls are available, and Destination Chargers on the screen in the car.

In October 2018 thirty Electrify-America-fast-charging locations were in operation:

For example, the Electrify-America fastcharging station at exit 156 on I-81 in Virginia has 4 CCS stations and 1 CHAdeMO station each with 150-kW maximum power. This is typical of Electrify America fast-charging stations in that the number of CCS stations is about four times the number of CHAdeMO stations. Electrify America has a long way to go to get anywhere near the Tesla-network capability.

The numbers add to 167 locations for fast-charging stations. The number of stalls at each location may vary and many of the stalls are lower than 50-kW power.

The green circles indicate stations that were available for charging when the map was made. The number of stalls at each location may vary.

The numbers add to 741 locations for fast-charging stations. The number of stalls at each location may vary and many of the stalls are lower than 50-kW power.

It is clear that legacy and startup BEV companies need to forge a deal with Tesla to allow their BEVs to charge at Tesla Superchargers and Destination Chargers in exchange for helping to pay for current infrastructure, maintenance and constructing more of the Tesla Superchargers and Destination Chargers. The smaller charging networks would then need to coordinate with Tesla to minimize redundancy and create a more even density of fast-charging stations across the country.

Tesla has exchanged the standard Tesla charging port for a CCS port for Model 3s sold in Europe:

Tesla has started adding CCS cables to Superchargers in Europe along with the standard Tesla cable:

Note the Tesla cable at the top and the CCS cable at the bottom. Tesla has joined the SAE CCS association, indicating that they will be using CCS charging for future Tesla BEVs.

The logical next move for Tesla is to provide a CCS-Tesla adaptor so that current Tesla BEVs can use all of the fast-charging networks in the U.S. If a deal can be struck with legacy and other BEV startups to use the Superchargers, then Tesla could equip the Superchargers in the U.S. with an additional CCS cable as is happening in Europe. Tesla sells an expensive CHAdeMO-Tesla adapter for Model S and Model X BEVs, but currently not for the Model 3. Perhaps a Tesla-CCS adaptor could be made available to non-Tesla BEVs so that they could use the thousands of Tesla Destination Chargers. (One already exists.)