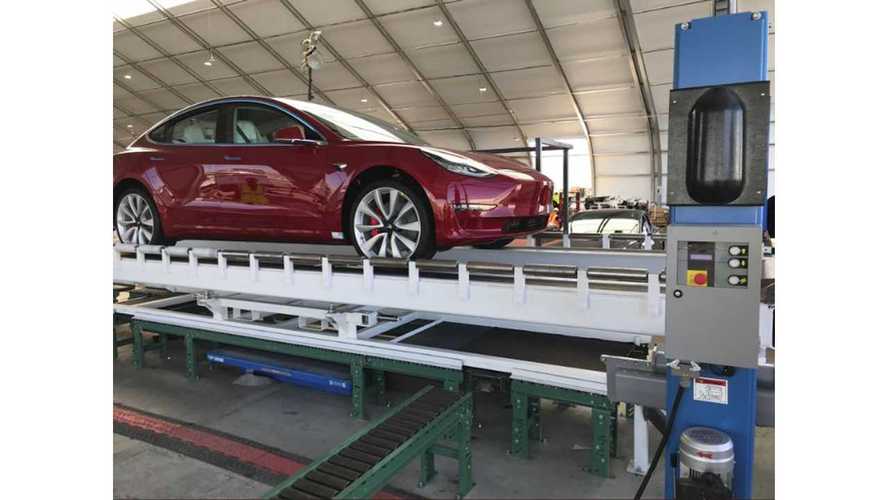 As Tesla's production ramp for the Model 3 continues to improve, so does its process. Part of this can be attributed to engineering efficiencies. Business Insider reports, "After a recent visit to the company's Fremont, California factory, analyst Pierre Ferragu of New Street Research, far and away Tesla's most bullish analyst on Wall Street, said the sedan is 'biblical' in its simplicity."

Tesla Model 3 Production Hits Close To 1,000 Per Day, According To Musk

Above: A look at the Tesla factory in Fremont, California (Image: Tesla)

"We could see the Model 3 assembled, from an empty body to a fully functional car in a bit more than 40 steps and 90 minutes, on a line about 1,000 feet long," Ferragu said in a note to clients. "Its simplicity is unbelievable."

In contrast, "A comparable car by any traditional automaker could take anywhere from 130 to 200 steps, Ferragu says, easily setting the Model 3 apart. The findings are similar to what UBS' Evidence Lab found when tearing down a Model 3 earlier this year, finding 'next-gen, military grade' tech below the finish."

Above: As production picks up at Tesla's factory, more Model 3s are hitting the roads (Chart: The Street)

"Model 3 has a bit more than a kilometer of cable, vs. 3x that for equivalent traditional premium cars. But this still feels half-baked," Ferragu said. "Ultimately, a car with a battery, a motor or two and a screen should have 2 power systems (high and low voltage) and one communication network. For that, about 100m of cabling per car should be necessary."

Ferragu acknowledges Tesla has plenty of room for improvement. A "crowded mess" and "unnecessary complexity" are still evident from Tesla's early ramp phase of the company's Model 3 production process, according to Barron's. However, as production steadily improves, Ferragu says, "The road to 7,000 units per week seems easy, and limited capital expenditures will be required (in the low tens of millions) to get to 10,000."

“We don’t know for sure what demand will ultimately be, but we know that from here, Tesla will expand its price range, introduce leasing, and expand internationally,” Ferragu notes. “All these levers combined have a lot of depth and should be more than enough to get to 10,000 Model 3 per week at the end of next year.”