Range Riddle: Kilowatt-Hours To Drive 184 Miles In A Chevy Bolt? 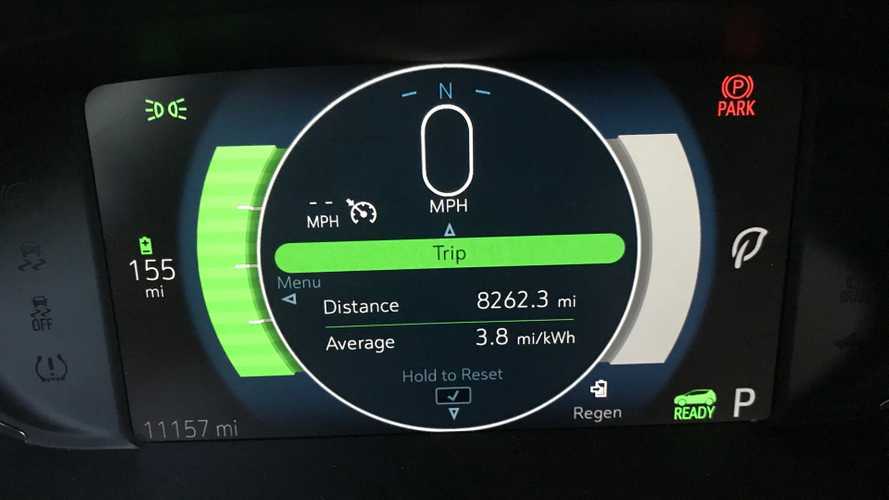 There’s a lot we don’t know about real-world EV range.

Ever since I started driving a 238-mile Chevrolet Bolt, my third electric vehicle, I haven’t given much thought to driving range. I began leasing the 2017 Bolt in June of last year, and its 60 kilowatt-hour battery pack was a big step up from my previous 2014 RAV4 EV’s 42-kWh pack granting 120 miles of range – just as that discontinued Toyota electric SUV was a bump from my 2011 Nissan Leaf’s pipsqueak 24 kilowatt-hours that eked out 84 miles on a charge. That’s a big leap in range in only six years. I rarely take road trips in the Bolt, so I recently embarked on regional trips in the Bay Area to learn more about my EV’s real-world range. The results of one particular trip were perplexing. I hope that you can help solve the range riddle.

My Bolt’s dashboard range indicator always seems low. It rarely registers more than about 160 miles of estimated range after a full, overnight charge even though the official range is 238 miles. So I reached out to FleetCarma, the EV division of the Geotab fleet management company, and they graciously loaned me a device that plugs into the car’s onboard diagnostics port. Data from the vehicle – such as state-of-charge, location, and driving speeds – are all registered in an online account.

With my wife along for the ride, we set out under blue skies and 60-degree weather from Berkeley to northern Sonoma County in what mapped out to a 180-mile round-trip drive. With the battery pack at 99-percent state-of-charge, I noted that the Bolt’s estimated range on the dashboard was only 155 miles. It also showed that over the past 8,000 miles I had averaged an efficiency of 3.8 miles per kilowatt hour. Logic would suggest that, even if I drive faster than I should for maximum efficiency, I would have plenty of juice for the 180-mile planned journey. In other words, I blew off the car’s 155-mile estimate and hit the road with trust in the EPA’s estimate of 238 miles on a single charge.

The first leg of the trip from Berkeley to Sonoma wine country, mostly along Highway 101, was brisk but not faster than the rest of traffic. My FleetCarma account later showed me that I averaged 50 miles per hour – with a top, momentary speed of (ahem) 82 miles mph. Lo and behold, after an 80.5-mile drive to Healdsburg, the dashboard revealed that the amount of remaining estimated range was only 65 miles, not even enough to make it back home much less complete the loop back through Napa Valley that I had planned. This leg consumed 23 kilowatt-hours, about a third of the pack and yet my data device indicated the battery state-of-charge at 41.2 percent. Explain that. The data and the dashboard suggested my efficiency was about 3.5 miles per kilowatt-hour.

Fortunately, just as we pulled into Healdsburg, I found a bank of Level-2 chargers at a private business, which amazingly allows anybody to charge free after office hours. So we plugged in and took a delightful stroll through quaint downtown Healdsburg. Ninety minutes later, the battery had taken on 9.5 kilowatt-hours of power (with 1.15 kWh in charger loss), and the Bolt’s pack was back up to 62 percent state of charge. Unfortunately, I didn’t note the estimated range was at that point, but with more than a half a pack, I felt certain that I had enough range for another 100 or so miles.

Six miles (and 1.4 kWh) down the road, we stopped at the lovely Quivira Vineyards and discovered – another lucky stroke – a free Level 2 charger in the parking lot. See the photo at the top of this page. After a one-hour stroll through Quivira’s gardens, the Bolt was supplied with another 7.5 kilowatt-hours of energy (with 1 kWh lost to the charger) and my car’s state-of-charge was up to 74.9 percent.

**Data from a day of driving. A new line is created with every key-start (when the car is turned on).

The rest of the road trip was completed in one stretch. It took us up to Geyserville, through the rolling hills of Calistoga and St. Helena, down through Napa and finally back to the congested East Bay. It was a 94-mile leg that consumed nearly 22 kilowatt-hours of energy – an efficient 4.2 miles per kilowatt hour in 72-degree weather with an average speed of 40 miles per hour. Those are ideal EV conditions.

**My four charging events over the course of 24 hours.

By the time we reached back home, the dashboard’s energy bar graph showed that the car was down to one-quarter of its capacity, which roughly matched the computer’s reading of a 21.2 percent state-of-charge. The estimated range on the guess-o-meter was an uncomfortable 35 miles. It was good to be home.

I ended the day with 35 miles of estimated range.

The total day’s journey was 183.4 miles in which I used 46.61 kWh of energy. The computer data and the dashboard were an identical match on daily efficiency at 3.95 miles per kilowatt-hour. I had added 17 kilowatt-hours of juice while on the road. Back home, I plugged the car into my Level 2 home charger, set to delay the flow of electrons to the wee hours when electricity is cheap. The next morning the Bolt was back to a 100-percent state-of-charge after adding 34.83 kilowatt-hours of energy (with charger losses at 4.18 kWh).

What lessons can be gleaned from this Sunday drive? (Besides perhaps that I don’t know how to add. I trust readers will point out where my numbers are wrong.) How do the numbers relate to the Bolt’s 238-mile of EPA estimated range? What if I had driven faster or slower – or didn’t have the benefit of the NorCal’s temperate climate? I’m sure the numbers from the drive contain a multitude of range riddles for us to ponder.