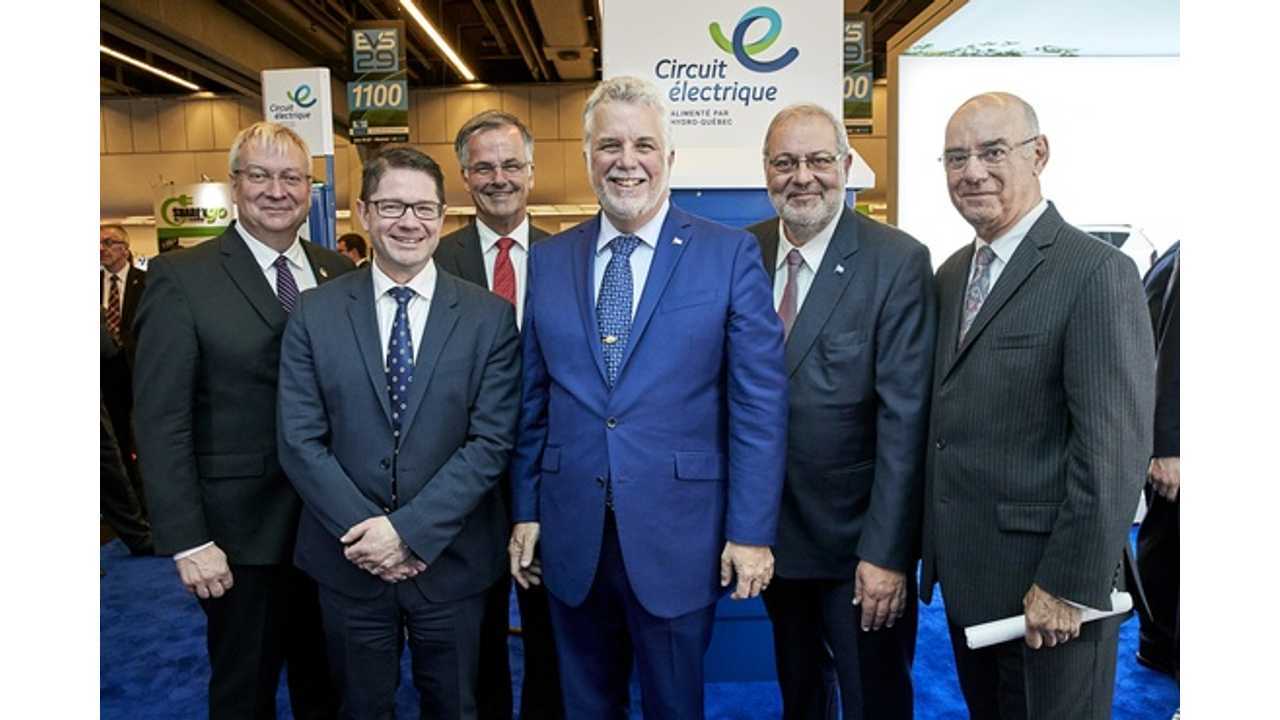 On the occasion of the international convention of electric vehicles - EVS29 in Montréal, Québec,Premier Philippe Couillard announced the electrification of Highway 20.

Québec’s busiest corridors will get a total 14 fast charging stations (of which eight are already are on-line) between Montréal and Mont-Joli.

Chargers will be supplied by the Québec-based AddÉnergie, and will be included into Electric Circuit's network (which currently features over 670 charging stations, including 32 fast-charge stations, in operation across 16 Québec regions).

"The Electric Circuit has signed agreements with the Belle Québécoise restaurant in Daveluyville as well as the Tim Hortons in Laurier Station, which will each install a fast-charge station for electric vehicles. These charging stations are in addition to those already in service in Sainte-Julie, Drummondville and Lévis. A sixth charging station will be available this fall at the St-Hubert restaurant in St-Hyacinthe.

Later this year, a second phase of Highway 20 electrification will be completed between Québec and Mont-Joli, with the addition of fast-charge stations in Montmagny, Rivière-du-Loup, Trois-Pistoles and Rimouski. Charging stations are already in service in La Pocatière and Mont-Joli."

Status of the fast-charge stations between Montréal and Mont-Joli

“Québec has all the elements needed for the development of electric vehicles. Sound public finances that instill investor confidence. Québec know-how, which is being developed at the college and university levels and in our research centres. As a result, we have a talented pool of manufacturers, component assemblers and integrators who are specialized in electric transportation. By developing our network of charging stations, we are advancing this industry, which is poised to be a strong vehicle for growth in Québec in coming years,”

“The addition of these charging stations ensures safe travel along one of Québec’s busiest highways. It will provide added incentive to drivers who take Highway 20 for personal and business-related travel to purchase an electric vehicle, and thus bring us closer to the ambitious target set in our Transportation Electrification Plan, of having 100,000 electric and hybrid vehicles registered in Québec by 2020,”

The Minister of Energy and Natural Resources and Minister responsible for the Plan Nord, Pierre Arcand said:

“The electrification of Highway 20 ties in perfectly with the energy transition we embarked on through our ambitious 2030 Energy Policy announced on April 7. This policy aims to offer choices to consumers while fostering concrete behavioral changes. In addition to reducing oil consumption by 40%, it will allow us to build a strong, diverse and low-carbon footprint,”

“The Electric Circuit and its partners are making a significant contribution to electrifying transportation and making Québec roads more accessible for electric vehicles. And Hydro-Québec has what it takes to contribute to this trend with our clean, renewable energy and our recognized expertise,”.