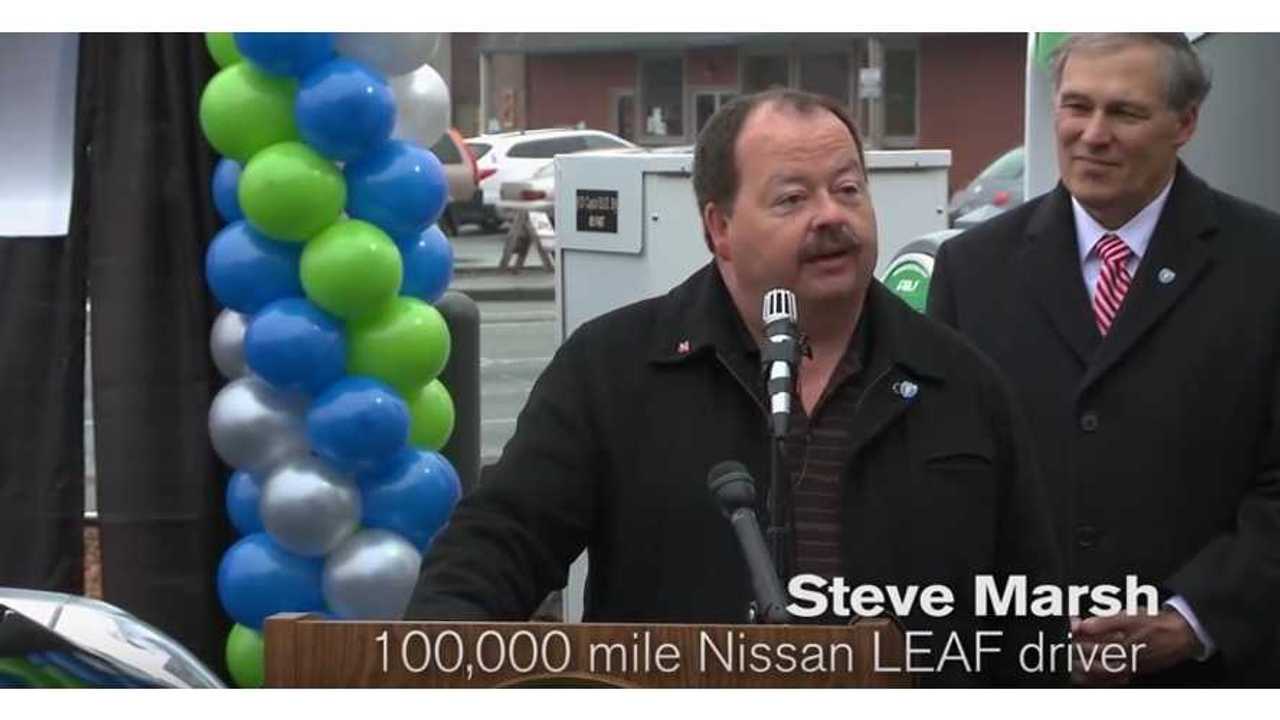 Steve Marsh recently crossed a new milestone of 150,000 miles (over 240,000 km) driven in his 2011 Nissan LEAF (with the original battery) in Washington state. Simply amazing.

Because of the battery capacity fade, the 2011 LEAF is now used only in warmer conditions, while for the colder winter months Steve uses his newer 2014 LEAF.

We had the opportunity to ask Steve few question about the milestone, his LEAF's current condition, and just some general opinions on the car (and EV tech in general) after so many miles logged.

Tonight when I pull into the driveway the odometer will roll 150,000 miles. My GID count is 147 at full charge and I have 5 bars gone."

Steve estimates that the range stands at about 35 miles today on the freeway (but can net a few more miles with economical driving). About half of a new 24 kWh LEAF.

"Average range – everything is generally freeway (little to no traffic) so realistic is 35 miles of freeway.  If I baby it I can get 42 but there is some headwind and I have to move off the freeway and run along parallel roads which adds more time."

It would appear notching the last few clicks to hit 150,000 miles was more a proof of capability. Going forward, the newer 2014 Nissan LEAF will take over all the year round driving duties.

Without a battery swap, there will be no crossing 200K for Steve

"I am done with the 2011 LEAF as it sits.  I have invested a great deal of time getting the car to 150K miles – sometimes as long as 3 hours if I have had to wait on a charger just to go 65 miles.  I have another LEAF at home and that is what I intend to start using again in the morning.

Some time ago, I told my contacts at Nissan that I would get the car to 150,000 miles.  I’ve now done it so I don’t expect it to get many more miles unless an opportunity to swap the battery comes up."

Reliability - any problems with the drive unit - motor, inverter, on-board charger, battery – besides lower capacity, or other key parts?

"Reliability – very good, if not excellent.  That being said, There is no more regeneration – going down a hill in ecomode is like being in neutral.  From a start, it accelerates like there is a parachute hanging out the back while in ecomode but nothing goes back into the battery.

The only other issue I have had is that the brakes grab and release when applied lightly while the battery is in LB or VLB.  I attributed this to trying to regenerate but no place for the energy to go.  I haven’t taken it in to be looked at because it is only very apparent during specific circumstances that are repeatable."

Whether the LEAF was a viable purchase after reaching 150,000 miles driven (especially that Nissan boasted that hundreds of LEAF taxi are used in Europe) and whether Nissan's approach on battery replacement is good from his perspective?

Economics seems questionable to Steve, especially because of value depreciation.

You ask if the LEAF is a viable purchase for 150,000 miles – no it isn’t for a daily commute of over 100 miles.  For 100,000 miles I would say yes.  It may work just fine to 250,000 miles if the average trip is less than 20 miles and it can sit on a charger for ½ hour before the next trip.  In fact it may go a very long time under that scenario but the LEAF was not touted as a commercial vehicle suited for short trips and frequent charging – in fact I had to sign paperwork that said using the QC more than once a day voided all battery warranty options."

Overall satisfaction from the LEAF, and thoughts about future – Chevrolet Bolt EV/Nissan LEAF 2 with a 60 kWh pack?

Steve said that he is glad that he purchased the LEAF,  and will stay with EVs in the future, but the approach of the dealers, charging infrastructure and other things still need to improve in the future.

"My impression right now.  Nissan has committed a great deal of resources but no one is really excited about it at Nissan.  The dealers certainly don’t seem to be – they haven’t embraced charging infrastructure.  Many charge if the car wasn’t purchased at their dealership.  I think Tesla’s sales model more closely matches what I believe Nissan has in Japan – they can tell the dealers what to do.  Nissan can install QC where they see a need.  As it stands now, there aren’t enough EVs and we are caught in a chicken or egg situation – merchants don’t want to install the chargers without the customers coming to their business and people don’t want to buy the EVs without having chargers available.  Along my commute there is a hotel that has 4 level 2 chargers.  The new manager apparently doesn’t like EVs so he turned off all the L2s.  I think charging is the key to impacting EV acceptance.

I also wonder if Nissan should start talking about what they are working on, instead of keeping everything a secret.  The purchasers are always hungry for news and recently, we had to find out about things through dealer leaks (30kwh and new colors comes to mind).  Tesla is not at all bashful about talking about what might happen and it creates excitement and buzz.

The market has changed over the last 5 years.  I didn’t want to buy a Volt because the price premium to an ICE was similar and I would be burning gas ½ an hour into my commute which didn’t help on the economics. I know nothing about the Bolt except it is small.  As for LEAF 2, I haven’t been following it.  Tesla 3 – clearly there are a lot of people that are willing to wait.  Nissan needs to work on leap frogging the competition rather than modifying what they have now.  I’m not aware of one update Nissan has done to improve performance of existing LEAFs – certainly not remotely.

I am really glad I purchased my LEAF and I don’t plan to move away from an EV for my daily commuter.  If we need to keep an ICE depends on greater range and redundant charging infrastructure."

Our thanks, and congratulations on the milestone, to Steve!