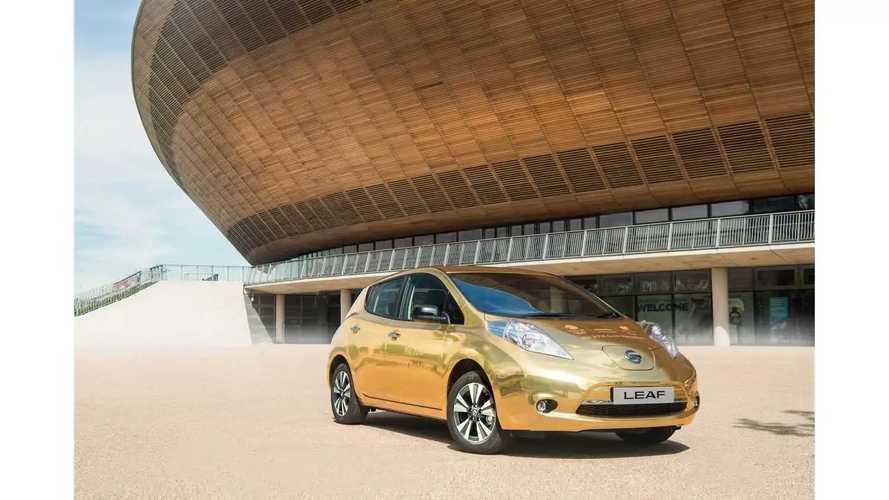 It looks pretty cool (at least as a conversation piece...not sure we'd actually like to make it our daily driver).  Nissan intends to giveaway the golden LEAFs to its athlete ambassadors who win gold at the Rio 2016 Olympic and Paralympic Games.

Only one golden LEAF will be gifted per gold medal winner, regardless of the number of gold medals won ... so extraordinary athletes won't be able to launch their own private gold-LEAF car sharing service.

"Sir Chris launched the initiative and unveiled the first gold Nissan LEAF at the Lee Valley Velopark, the setting for some of his own gold medal-winning moments.

Nissan ambassadors, including the likes of heptathlete Katarina Johnson-Thompson, gymnast Max Whitlock and multi-gold medal winners David Weir CBE and Richard Whitehead MBE will have the chance to drive away from Rio 2016 in the world’s best-selling 100% electric vehicle, the Nissan LEAF."

“It’s always exciting and nostalgic to come back to the Velopark, after winning my fifth and sixth gold medals here,”

“For all of the Nissan athletes going to Rio, the 2016 Games will be a moment in their careers that they will never forget, whether they win a medal or not.

“But let’s hope they can do it – compete at their best and come home with gold. It would be fantastic to hand over one of these special gold Nissan LEAFs on their return.”

“Giving our gold medal-winning Nissan athletes a gold Nissan LEAF is our way of celebrating their incredible successes.

“Nissan is fully behind all of the GB athletes heading to Rio but will of course be keeping a close eye out for those we have individually supported over the course of the Games’ cycle on their road to Rio 2016.”