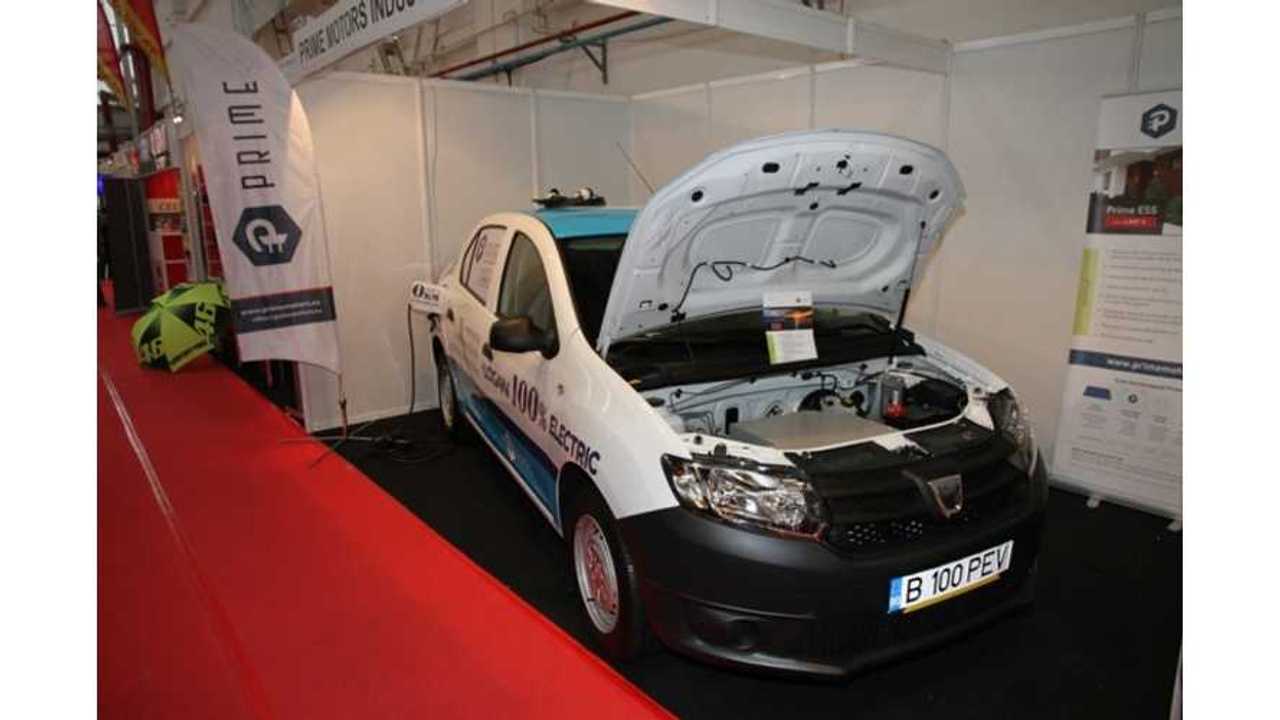 The Bucharest Auto Show is the national Auto show for Romania that takes place every year at the end of October.

This year there were several new EVs in attendance, but the most important being the launch of the Prime EV from Prime Motors.  Prime is a producer of customized energy-storage devices based on lithium battery technology, that now also has a motor division - Prime Motors Industry.

Editor's Note:  While InsideEVs does make it to many (if not all) of the major auto shows in the world each year, the Bucharest show is not on our normal rotation, so we'd like to thank Andrei Gloaba for re-visiting the show for us this year and filing this report (check out Andrei's 2013 report here).

Prime EV is a Romanian made EV, built on the same platform as Dacia Logan (Dacia has been a subsidiary of the French car manufacturer Renault since 1999).

We assume an optimistic Euro/NEDC rating is at play, so probably once could expect around 300 km (186 miles) of real world range.  Still not bad.

The charging inlet is Type 2, that supports 230V/32A (7.4kW) or for fast charging 400V/125A (50kW). The charging time could be as low as one hour with the bigger battery (45 kWh model), and only 20 minutes for the entry level model. The car comes equipped with all the necessary charging equipment standard so it could take such a high charge, all the electronics are located in front of the car, where the engine used to be.

The trunk space is NOT compromised by the bigger battery and there is no alteration to the car's interior. The dashboard uses the same display to indicate the battery level and all the rest of the driver information. The car comes with the same safety features as the latest Logan model.

The main battery is placed underneath the car, and covered with a protected plate, other battery modules are placed in the same space where the gas tank was, and a few battery modules are in the front of the car for the best weight distribution. The batteries are manufactured in Romania, with the active material coming from Switzerland and Germany. The car comes with a 2 year bumper to bumper warranty, with 5 years warranty for the battery, and 200,000 km for the electric motor itself.

Other EV and hybrids present at the show were: Kia Soul EV, their new hybrid Kia Niro, BMW i8, Ford Vignale Hybrid, Volvo S90 Twin and Tesla (although unofficial).

Some of the other major plug-ins in attendance in Bucharest