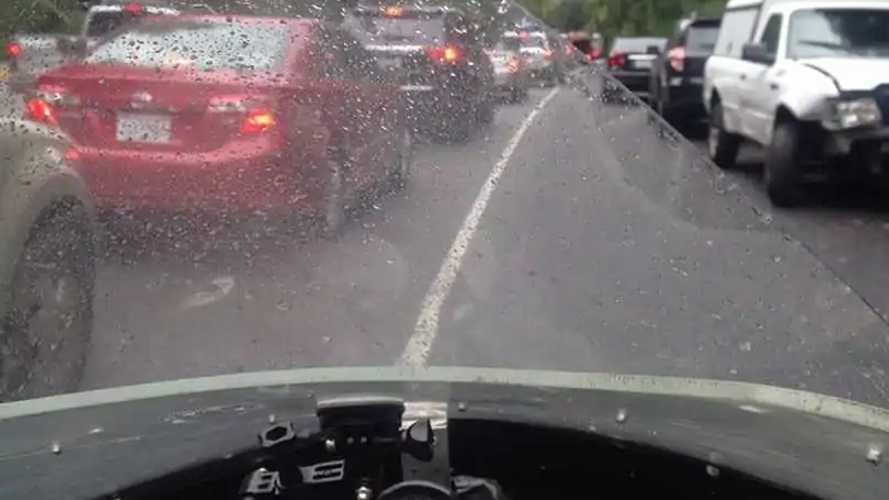 At around 2:30 Pacific time Terry Hershner saddled up for yet another record - a 250 mile trip on one charge on his 2012 Zero S, with his Vetter streamlining.  Now, they haven't seen rain for months down there, but what do you think was the forecast for this afternoon in sunny California?  You guessed it.  Rain, with what amounts to a 15mph headwind.  Here's the approximate route:

As he leaves Sacramento, he leaves pretty much his last charging options: "I'm kinda nervous about this. Chico is in the middle of nowhere. No charging stations for 100 miles".  Last week, on a shakedown run, he made a bit over 200 miles, as far as we know, the first in history to do so, but that would leave him 50 miles short of his goal.

Oh, yes.  Did we mention?  He's just going up to see his buddies at the Sierra Nevada Brewing Co.  Something about them owing him a beer.  Right?

Well guys, he made it.  Here's the proof:

...however, he also was a little short on miles:

Made it! But a small problem. I only went 225 miles on my trip. I was supposed to take a longer route. So I'm gonna stop to take my first pee since the Santa Cruz area, grab some water and hit the road again!

Apparently, in addition to an Iron Butt, Hershner has a stainless steel bladder.  So he headed off again, past Chico, on another 44 miles or so, to this:

...and back.  Along with the comment, "Screw 250! I'm going for 300!!!!". And now, folks, we bring you the results of this May 7 World Record Attempt to Achieve More Range than Anybody Else on an Electric Motorcycle in One Charge, Surpassing the Previous Record of 200 Miles:

In case you were wondering, out of his onboard 27kWh (more than a Leaf): I had less than a mile left at highway speed but 20 miles at 20 mph".

Mom? Is that you?