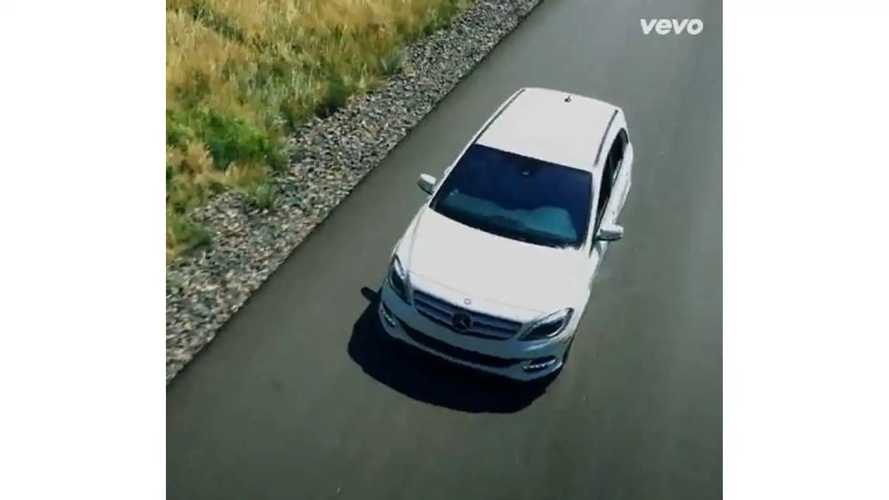 The Mercedes-Benz B-Class Electric Drive makes a brief cameo appearance in the new music video "I Lived" by OneRepublic.

Typically, an EV appearing in a music video wouldn't interest us much, but the fact of the matter is that most seem to believe that Mercedes-Benz isn't interested in selling the B-Class ED in volume.  If that were true, then why pay for the cameo appearance in the video of one of today's hottest bands?

It's worth noting too that the B-Class ED is shown rather prominently in the video for more than a few seconds and that OneRepublic lead man Ryan Tedder has been brought on by Mercedes-Benz to be one of the brand's ambassadors.

Stuttgart/Paris – A new star for the brand with the star: Ryan Tedder, co-founder and frontman of the pop/rock band OneRepublic, is to become a brand ambassador for Mercedes-Benz. The collaboration between the Stuttgart-based automotive brand and the singer-songwriter from Denver will kick off with the world premiere of the new B-Class on the eve of the "Mondial de l'Automobile" motor show in Paris on 1 October 2014.

"We are very happy, that we could win the music star Ryan Tedder as a Mercedes-Benz brand ambassador. Like our brand he stands for passionate creativity and dynamism, unmistakeable style and worldwide success." says Dr. Jens Thiemer, Head of Marketing Communication at Mercedes-Benz Cars. "We are convinced that Ryan Tedder and the new OneRepublic song‚ "I lived" supports in persuasive way the communication of the new Mercedes-Benz B‑Class. We are glad about the live performance in the eve of the fair in Paris."

OneRepublic will perform the new song "I lived" live at the Mercedes-Benz Media Night in Paris. After that, "I lived" will become a key element of the B‑Class communication campaign: the song will feature in a soon-to-be-launched series of advertising spots for the new B-Class.

"We shot the video at Red Rocks Amphitheatre in our home state of Colorado, which is on its way to becoming the greenest state in America. The B-Class electric car is a massive step in that direction, and given the global reach of Mercedes, the B Class was the only car we would have put in that scene... it was perfect," says Ryan Tedder.

The B-Class Electric Drive plays a leading role in the new music video for "I lived", which has just recently released to Vevo (http://vevo.ly/RjrPwB). The video tells the true story of 16-year-old Bryan, who is living with cystic fibrosis. Many affected people suffer from lung disorders and mutations at the extremities – including Bryan. Yet he still masters his life and does things that others with his illness might not have thought possible – such as riding a racing cycle. He enjoys life and defies all adversities. This is the message that OneRepublic want to get across with the song: Tedder: "Bryan is a great example in showing that anyone can overcome adversity. Make the most of every day, just like he has."

About Ryan Tedder Ryan Tedder from the USA has been making music since he was three years old. His parents encouraged him in early childhood to learn to play the piano. At the age of seven, he began to sing. Having grown up in Tulsa (Oklahoma), Tedder today lives in Colorado and is currently one of the most successful singer-songwriters in the world. The 35-year-old shot to fame with his pop/rock band OneRepublic, which was set up in 2002. Alongside countless hits for his own band, Tedder has produced various Number One successes for international stars such as Beyoncé Knowles, James Blunt, Adele and Maroon 5. In Germany, the songs are known, among other things, from Till Schweiger films like "Keinohrhasen" ("Apologize").

About the new Mercedes-Benz B-Class The B-Class is the perfect car for all those who, while attaching great importance to practicality, comfort and safety, do not wish to lose out on sportiness and driving dynamics. Since its market launch at the end of 2011, the sports tourer has already sold over 380,000 units worldwide. At the Mondial de l'Automobile in Paris at the beginning of October, Mercedes-Benz will now unveil the new B-Class: enhanced both inside and out, with redefined equipment lines and a host of new driving assistance systems (some of which as standard), the B-Class will present itself in new top form. Four economical diesel engines, four efficient petrol engines and optionally available 4MATIC all-wheel drive will make for a unique range of choice in this segment. With the B 200 Natural Gas Drive and the local emission-free B-Class Electric Drive, there is also a choice of two alternatively powered variants.

Behind the scenes video below: