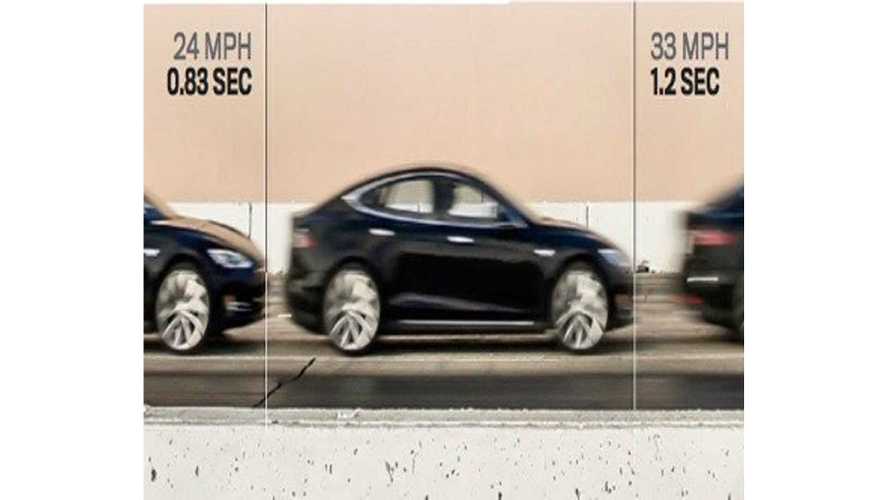 "In the options selection, you'll be able to choose three settings: Normal. Sport. And Insane."

"Yeah, it will actually say Insane."

Motor Trend just took a crack at fully testing the Model S P85D is that "insane" mode and the test results are in: 0 to 60 MPH in 3.1 seconds (or 0.1 seconds quicker than Tesla's official 3.2-second time).

"...the easiest way to flatten your retinas at a dragstrip isn't by just stomping on the right pedal. Instead, you draw your foot back and kick the living hell out of it. (I'm serious.) Your foot's flying start at the pedal means the potentiometer opens the battery's electron floodgate that much sooner, and without the teeniest tire chirp, the P85D accelerates at the highest rate the road's mu (its coefficient of friction) allows. It's surreally efficient. And it's so fast off the line that the slower-sampling rate of our two high-frequency GPS data loggers was actually missing some of the action; within the first 1/20th of a sec (not even the "O" in "One Mississippi") the car was already going 0.7 mph."

So quick is the Model S P85D that the data loggers couldn't even keep up with its pace.

The pace doesn't fall off much either:

"To 30 mph the P85D would be four feet ahead of the fastest-accelerating sedan we've tested, the Audi RS 7, a gap that holds to 60 when the Tesla punches the clock at 3.1 seconds, a tenth quicker than the Audi (as well as the McLaren F1's accepted time -- all of these after subtracting the customary 1-foot rollout). Both cars arrive at the quarter in 11.6 seconds, with the Audi starting to show its higher-speed chops."

So, it's quickness is exceptional, but did you know there are others features worthy of recognition in the P85D?