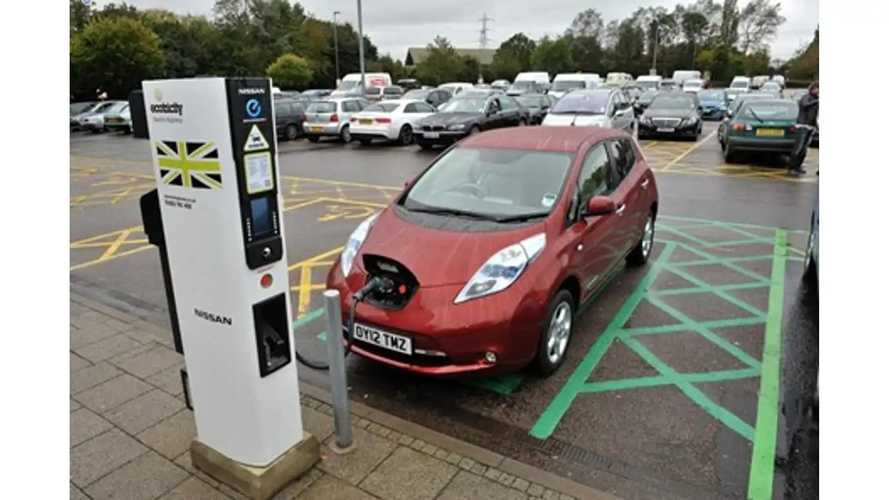 We are entering a time in which every charging point network boasts of how much energy is being delivered or how many cumulative miles electric cars have gone courtesy of a charging network.

Ecotricity's Electric Highway is no different and happily announces that over the last twelve months, electric cars traveled over one half million miles on juice from Electric Highway charging points.

"The Electric Highway, Ecotricity’s national network of electricity pumps for electric cars,and the biggest network in Britain, has grown rapidly in reach over the last year and by the end of this year there will be an Electric Highway pump at every motorway services in Britain."

There are ~ 110 charging points in the Electric Highway network and probably most of them are dual output ones with 50 kW DC (CHAdeMO plug) and 43 kW 3-phase AC (Type 2 plug).

Interesting is that in another twelve months, the Electric Highway is expected to deliver energy for one million miles.

Dale Vince, founder of Ecotricity and the Electric Highway, stated:

“Petrol prices are on the rise again with the events in Ukraine about to add another couple of pence per litre – one of the great strengths of electric driving is that we can power our cars from the energy we make in this country. Energy independence for British transport will mean we won’t be at the mercy of external events and the inexorable rise of fuel prices.”

“The energy provided by the Electric Highway is 100% green – and that’s important. It’s not just about going electric – it’s about ensuring that electricity comes from renewable sources. The transport sector is the second biggest source of the carbon emissions that cause climate change, so a shift to electric cars is not just the right decision economically, it’s an environmental necessity, too.”

Soon, Ecotricity’s Electric Highway will have fast chargers with three plug standards (the third is the European version of Combo used by BMW and VW). But equally good news is that the number of chargers at each location will double.

"Ecotricity’s Electric Highway has already begun rolling out new technology this year to ensure the network caters for all three standards of electric charging – meaning new models from BMW and VW will also be able to use the network – and is also doubling the number of chargers at each location to accommodate increasing demand."

“It’s still early days for electric cars in Britain. There has been a bit of a chicken and eggs situation – the lack of charging infrastructure put people off buying electric cars, but the infrastructure wasn’t being built because there weren’t enough vehicles on the road.”

“The Electric Highway has addressed the infrastructure gap. Car manufacturers are producing exciting new models, increasing choice. And as we have seen over the last week, Government support for the sector is continuing. Those three things are all pulling in the same direction, meaning it’s an exciting for the electric car market.”