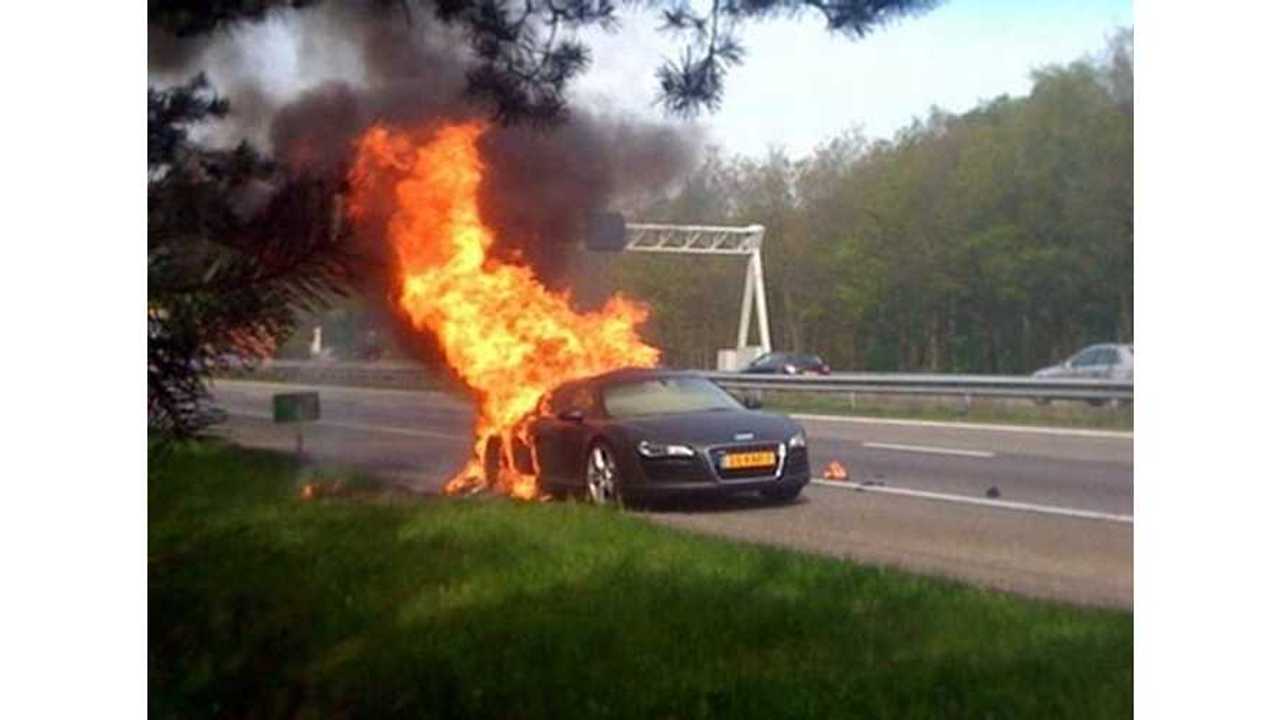 Recently I was attracted by an article headline written by Cherise LaPine for HowStuffWorks.com titled “Top 10 Causes of Automobile Fires". I was intrigued on how the data was submitted so I thought I might score them between ICE vs EV. In other words, which is the least likely to cause a fire in each category: an EV or an ICE?  I will address them in the same order as the linked article in each category.

Design Flaws Can Pop Up Just About Anywhere And Become A Hazard.  In This Regard, The Age Of Gasoline Technology Should Give It An Advantage

HowStuffWorks has noted that design flaws can pop up just about anywhere, sometimes becoming a hazard and even creating conditions in which an eventual fire is inevitable. In this regard the age of gasoline technology should give it an advantage.

I am going to give this one to the ICE only by changing the category to specify "new model designs" as being more likely to start a fire, primarily due to the fact that EVs are indeed new to the market. The Fisker Karma had some electrical issues that did indeed cause a fire. It is worth noting that the Fisker fires happened on the 12-volt battery side, still they fit this category along with the Toyota ICE heated seat fires. As for design flaws as a whole being a source of fires, we will revisit this one in summary.

HowStuffWorks highlights the fact that the less maintenance you do, the higher the risk of fire as a cause of this neglect - which makes good sense.  They also note that "frayed wiring is more likely to spark and make contact with flammable materials."

The EV has plenty of wires, but as for your flammable liquids?  Not so much. Clearly this one goes to the EV as being less likely to start a fire. Another comment about poor maintenance for the EV is what maintenance? EVs simply have less things to maintain which is superior by itself in freeing your time and saving your pocket book. The fact that less maintenance actually makes you safer is a concept that I had not considered before. Nice.

Still Waiting on that Mushroom Cloud

Well this is the one everyone wants to rave about. According to the U.S Federal Highway Administration data, roughly 2,980 billion miles were driven, on average, per year on U.S. roads during this period. Roughly 90 highway vehicle fires and 0.15 highway vehicle fire deaths were reported per billion miles driven. Of those 90, about one third of those fires come from collisions.

EVs have now logged over a billion miles on the roads and have only 3 fires due to highway collisions which is the category in question. Oddly enough the only 3 fires happened with the same manufacturer, Tesla, within 5 weeks of each other.

3 EVs-to-30 ICE fires? EVs win. With the implied instability of this new EV technology, we only show 3 fires due to road collisions. BTW, the demolished Volt in the pic did not catch fire but the ICE (Camry) that ran into the Volt did.

HowStuffWorks lists arson as the criminal act of starting a fire. The reasons range from insurance fraud to simple vandalism.

I gotta call this a tie. Though ICEs currently have many more cases of arson,  never underestimate a vandal or one in pursuit of insurance fraud to make their way into the EV world as well.

Clearly I give the win to the ICE because they are void of this technology but not without clearing up some statements that were made about this technology. The first excerpt came from the explanation about what happened when a Tesla Model S collided with road debris. "the battery behaved like any other battery would: it ignited." Not true. That is like saying a gas tank behaved like any other gas tank would: it ignited. Both can ignite, it's science. Tanks are designed to resist combustion and so are batteries. Gas tanks don't catch fire like Hollywood implies and neither do batteries combust like this journalism implies. And on "How Stuff Works" of all places....

“Throughout 2011 and 2012, the Chevy Volt made headlines when a bunch of test vehicles caught fire during impact testing.”

The media hype all started with a side-impact test - actually a side into pole test, which is not a standard test, as the frame of the car penetrated the battery (which if you know how the Volt battery sits in the center this is no easy thing to do). They then simulated a rollover.

At this point (after a serious collision like this) the battery is to be discharged as per federal accident instructions, you know, like the requirement to empty the gas tank of its stored energy after similar testing. But the NHTSA didn't do that, instead with the coolant leaking onto the battery pack and its circuit board they put it outside...which normally would mean nothing - unless of course you leave it out to freeze for a couple weeks where the coolant can crystallize - which can cause a short...and then you have your long awaited fire.

When NHTSA further investigated the incident, they got a hold of three more packs - not cars from GM and inflicted similar damage to replicate the issue, or to see if it could happen . As mentioned these were simulated tests, ie) wicked hard and expensive to duplicate so they just got a battery and beat it up.  They didn't manage to get the first to catch fire, but did on the second two packs.  These weren't full cars, these were packs - nonetheless the 'Volt fire incident' count is three.

To Inside EVs knowledge, no Volt or LEAF has ever caught fire of its own accord in the wild - in any circumstance - sitting, driving, charging or in an accident.  At this point the statistical odds of a fire having not occurred in those 2 vehicles for the last 3 years are probably getting pretty ridiculous. So no more “a bunch of test vehicles aka Volts caught fire" please! (Special thanks to Jay Cole)

I am thrilled though that we are discussing “things in the vehicle like batteries that ignite or lead to combustion.”

HowStuffWorks list the catalytic converter as an often overlooked item responsible for starting a fire. They report that a poorly functioning catalytic converter can reach temperatures of 2000 degrees Fahrenheit and can ignite the cabin insulation and carpet right through the heat shield and metal floor pan.

Nope, BEVs don’t have those. Score another for the EV. 2000 degrees. Just imagine if any item on the EV reached those type of temperatures. BTW, replacing a worn or damaged catalytic is also expensive and one more maintenance item that you will never pay for on an EV.

BMW i3 Electric Motor - Not A Big Fire Risk

HowStuffWorks has listed overheating engines as the fourth largest cause of car fires. The cause is explained by the rise of overheated fluids by temperatures that cause the fluids like oil and coolant to spill out onto the engine and exhaust system where they can easily ignite.

The electric motor can generate heat but I don’t know if I can even give a plausible to combustion especially when those fluids do not include gas and oil. This may cause a future fire but will never match the hazard of the overheating ICE engine. The win goes to the EV.

#3 Spilled Fluids HowStuffWorks has #3 listed as spilled fluids which is similar to #4 overheated engines. Spilled fluids are separated into their on category in that the fire does not originate from the fluids spilling over due to temperature. They are in this category transferred to the combustion area due to a leak of other failure in the fluid transfer lines thus causing the fire.

Now with the EV motor operating at normal temperatures, and the fluids not including gas or oil, the chances are greatly reduced for the EV due to spilled fluids unless it is in a collision which is it's on category. Clearly a win for the EV.

HowStuffWorks puts electrical wiring as #2 because statistically it is the second most common cause of fire. They go further to state that these wiring fires often originate with the battery causing the fire as well.

This is probably the hardest to score. Now batteries have already been awarded the win to the ICE. Currently the real data has the ICE losing this category, but it really is not fair to compare since this is mostly due to aging ICEs. I really want to give this a tie because the battery win is already awarded to the ICE. Due to the complexities of this potential hazard, I will leave this up to the InsideEVs contributor panel to decide.

HSW sums up #1 on the list pretty succinctly "Leaks in the fuel system are the most common cause of vehicle fires, so that's why they take the top spot on our list ."

Now clearly the #1 cause of fires here is the ICE and the safety win goes to the EV. It was the top 5 causes that "fueled" my desire to review this article. In #10 (Design Flaws), it was stated that the manufacturer usually performs a recall to remedy the potential fire hazard. If  fuel system leaks are the #1 cause of fire, imagine a car design that no longer requires this hazard.

When comparing collisions only, EVs are safer 30-3 or 10-1, yet collisions are only responsible for a third of the fires. In general, the public and media has dismissed the other two thirds causes for fire in an automobile. They have dismissed the fact that fuel systems are still the number one cause of fires and this will never be the case for the BEV. In fact, 4  of HSW's top 5 causes for fire including (fluid spills, overheating engines, and catalytic converters) will never be the cause of a fire in a BEV.

Manufacturers quickly recall design flaws that potentially lead to fire hazards as outlined in #10.  The Internal Combustion Engine is riddled with a base design that can not escape 50% of the causes for fire.  Given these facts, design flaws  will not be a greater cause for fires in an EV rather in the inherit design of the ICE. Insurance companies ultimately work from statistical models. As more EVs add to the data, insurance premiums will ultimately be effected by the lack of fire incidents. Not only will life and personal injury be reduced, so will the flow of cash from your pocket book in fueling, maintenance, and even your insurance premiums.

It is very enlightening to look at the entire list provided by HSW and apply it to the US Federal Highway Administration data. Though I can not put and exact number on the remaining 60 fires per billion miles driven on US roads, it is clear that the EV,  as new as they are, continue to be safer when  it comes to fire incidents. Of those remaining 60 fires per billion miles, EVs will never be subject to over half of the incidents which are caused by fuel systems, fluid spills, overheating engines, catalytic converters and more . This does not make the EV safer from fires by 2x, 3x, 5x, or even 10x , rather this technology is proving to be safer toward the potential of catching fire at some ridiculous ratio to its brother the ICE.

So when the next EV fire makes the news and someone makes comment, tell them "That's great! Still 26 fires to go to be as lethal as an ICE! That is if by collision, otherwise there are many more to be equally dangerous!" That was of course spin.  But here is the facts, the EV is safer and less likely to catch fire period.