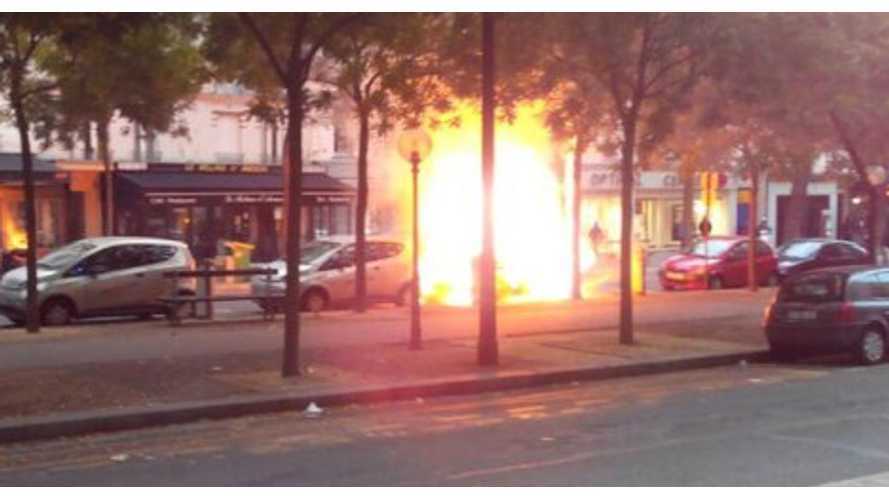 Autolib, a car sharing service that operates out of Paris that features Bolloré's electric Bluecars, has a bit of a PR set-back on its hands, as two of their cars have been destroyed by fire.

The incident happened on Monday morning, as one of two cars that were ultimately destroyed by fire "exploded" while charging on the streets of France on Boulevard de Charonne in the 20th Arrondissement of the city.

Another Look At The Aftermath Of The 2 EV Fire (photo via twitter: @RATPIEDS)

According the The Local who first reported the incident, no one was hurt, but there was plenty of people in the area who saw (and heard) the explosion, as well as watched the two electric cars burn.

"I was on my way to work, when there were explosions like fireworks in one of the cars. A fire then took hold of a second car. Fireman were not able to get near the blaze because of the traffic jams,” one witness told The Local.

As a point of reference, the Bolloré Bluecar has a 30 kWh battery that lets the car travel as far as 150 miles (provided you drive like an old lady on Sunday).  The car also has a top speed of just under 70 mph.

Autolib has plans to bring their car sharing model (but with less fires) to Indianapolis in 2014.

As for the cause of the explosions, that is still under investigation by the police.  Separately, Le Figaro newspaper reported there was "no indication of abnormal heat from the car's batteries shortly before the fires."

Bolloré has stated that the source of the explosion came from "outside" the vehicle.  The Local infers this to mean that vandals were to blame; which is not uncommon apparently, as the magazine says that 25 Blue Cars have been damaged since the car sharing product was launched.