One of the busiest roads in North America has now been dotted with nearby electric vehicle charging stations.

And no we aren't talking about a road in California or up the west coast this time.  Sun Country Highway, a privately funded Canadian company that has been installing public chargers across that country, has recently expanded its network alongside Highway 401 in Canada. 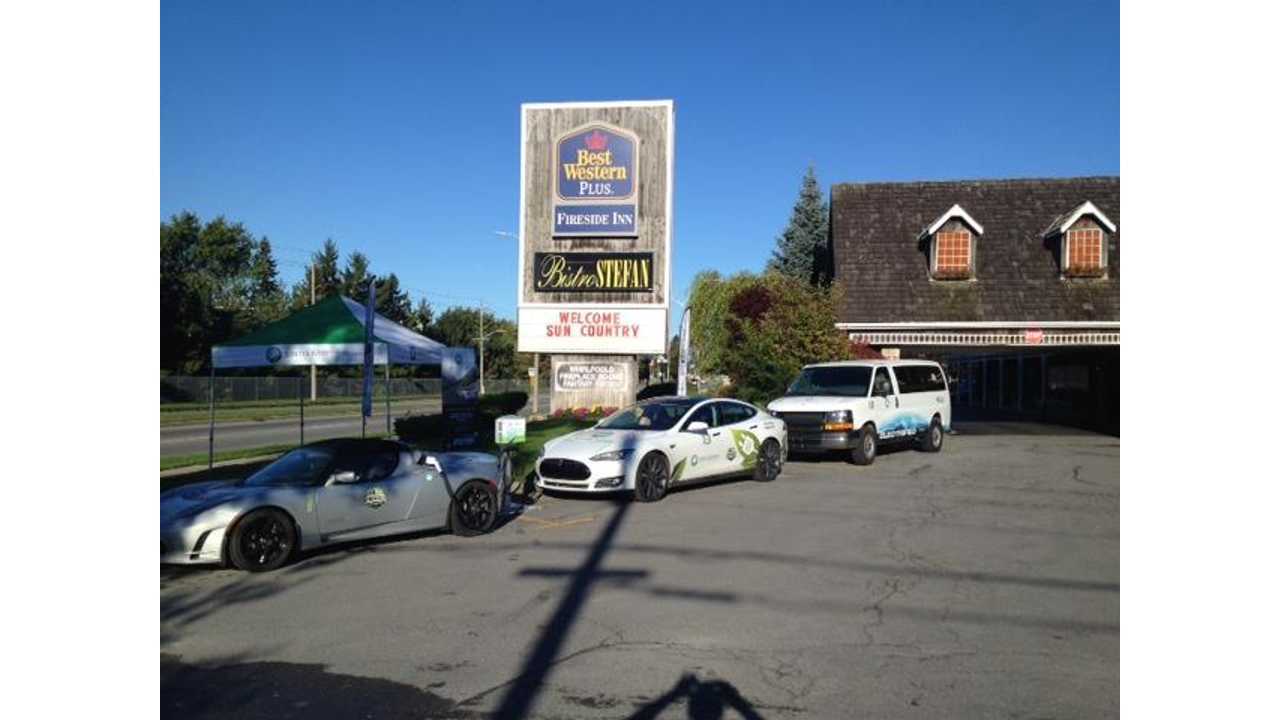 Sun Country Is Taking A Tour Of Their Network With Both A Tesla Roadster and Model S, As Well As A Chevy Volt...And A VIA VTRUX Van!

In total, more than 20 public charging stations (including 17 recent ones) have been placed alongside the highway; meaning any fully electric vehicle (currently on sale anyway) can now make the trip from Detroit, through Toronto, to Montreal completely on electricity - a total of 900+ km (560 miles).

Along the route stations have been placed every 50-98 km (31 to 60 miles), making the journey practically worry free;  but not all that quick, as all the stops are Level 2/240V stations.  On the upside, all Sun Country stations are completely free for the public to use.

President of Sun Country, Kent Rathwell talked to the Seaway News while using a charging station at a Best Western Parkway Inn in Cornwall, Ontario and told the publication:

"We proved you can travel long distances with zero emissions. This year our goal is to green 90 per cent of Canadian highways." 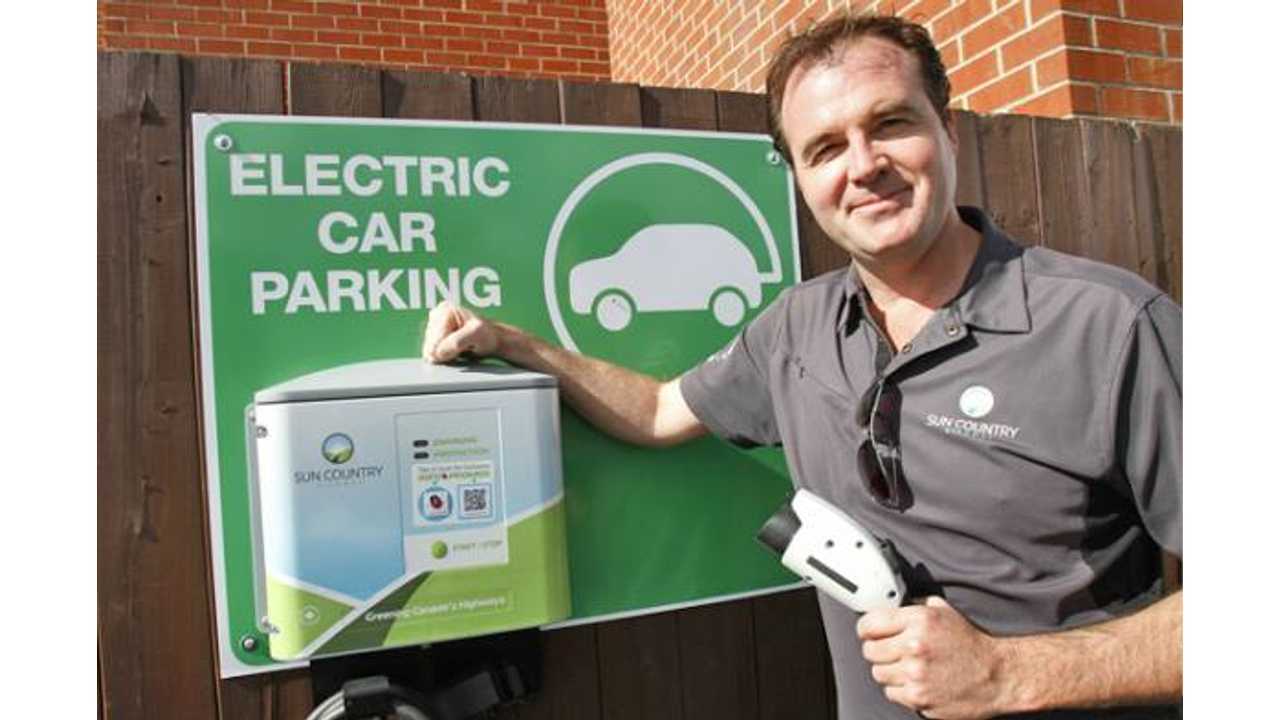 As to why all level 2 chargers are in play, and not DC fast charging units that can give most EVs a 80% top-up in less than 30 minutes, Mr. Rathwell told the Globe and Mail that L2s bring the most availability to the most plug-in car buyers, and that the L3 landscape protocols are still changing.

Well, that and L3s cost a lot of money,  they are hard to install, and they want to still be able to give away charges for free.

“Level 3 chargers have cost too much in the past, take too long to permit and install and most cannot justify or afford to give the power away for free.  In the future, I see level 3 becoming more viable but there is no way that we could have implemented what we have done in such a short time with level 3 – speed of proving the impossible is absolutely vital: the majority of people will not buy an EV if they cannot drive long distance, even if they never do.” 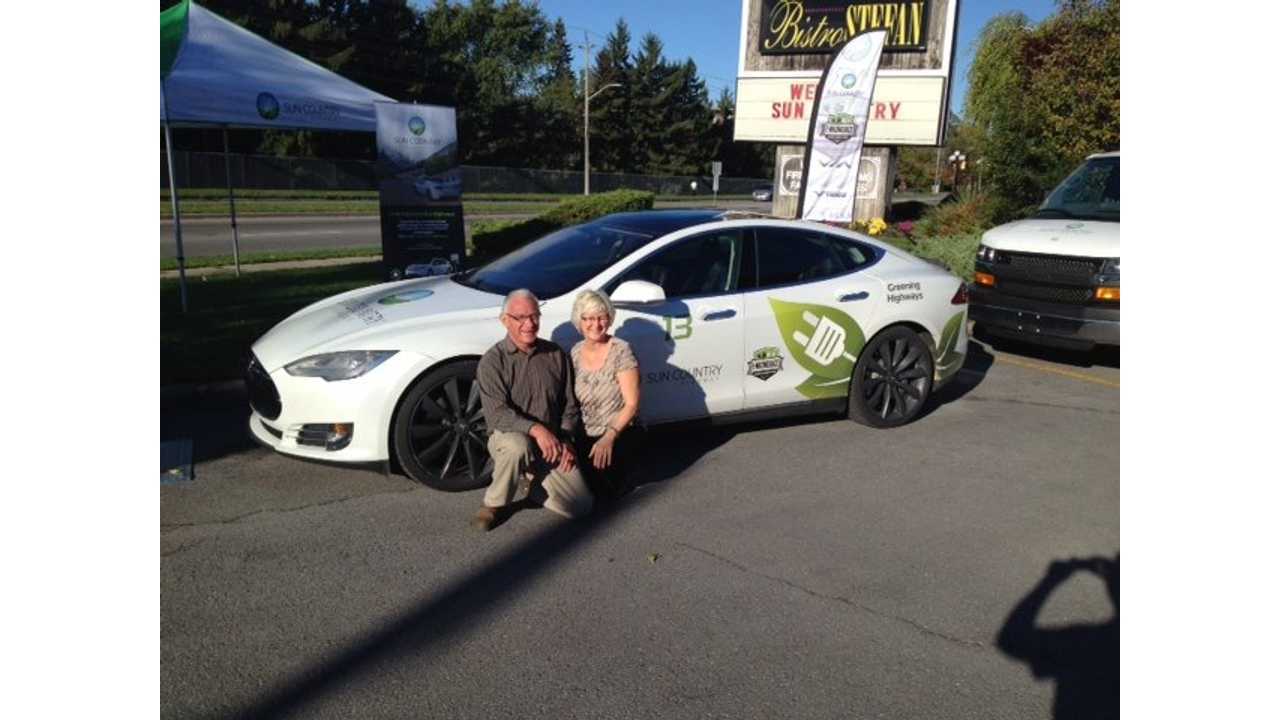 Sun Country just wrapped up taking the 900 km route promoting their stations.  The road trip, which left Montreal on Monday finished up in Windsor (just across from Detroit) on Thursday afternoon at the Comfort Inn.

On that journey with Sun Country was a Tesla Model S and Roadster, Chevrolet Volt, and a full-size VIA V-Trux plug-in van; which incidentally goes on sale to the public next month for early 2014 delivery.