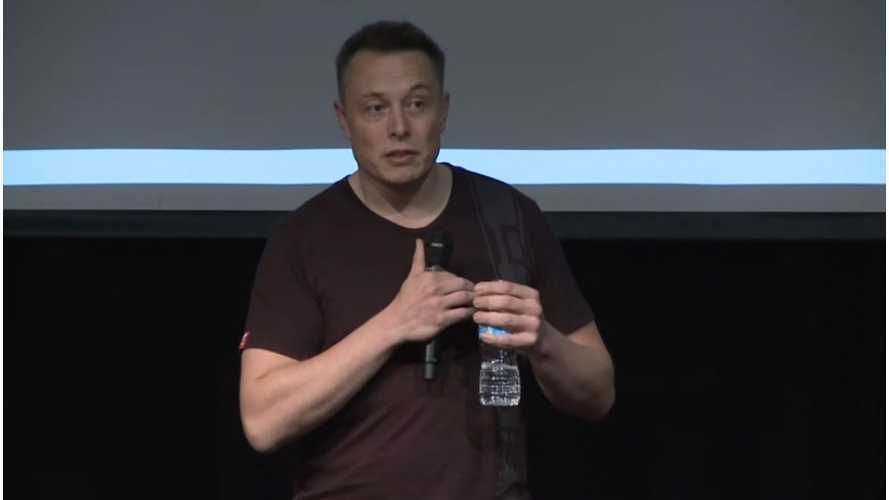 Tesla Motors just wrapped their 2013 Annual Shareholder Meeting in Mountain View, California on Tuesday night...and with CEO Elon Musk doing a presentation, fielding some Q & A, and a company now flush with cash after a recent stock offering, you just knew there would be some flashy announcements and a light-hearted atmosphere.

Tesla Maps Out Their Plans For The Next 4 Years

The CEO started out with some light hearted banter about why the Model S only achieved 99 out of 100 on the electric sedan's very high profile, near perfect, Consumers Report rating.  That result was actually tied for the all-time best rating with the Lexus LS 460L in 2007.

(For the record, some questions about the availability of the rapid charging infrastructure perhaps limited the freedom of Model S owners stole that last point)

Of more interest was an update on the upcoming, less expensive 3rd generation offering.

On that subject Mr. Musk noted it would basically be"a smaller version of the Model S at half the price."  The Model S, with the deletion of the 40 kWh entry level offering, currently starts at $69,900 (before incentives), meaning this future car will have a price around $35,000.

The Tesla founder notes the following tidbits on the Gen III car:

Tesla Does Some Forecasting For 2013

Other notes of interest from the meeting...which we have video embed below if you care to watch: (and you should, as it is fairly entertaining from around the 7 minute mark when Mr. Musk takes the stage by mocking 'the shorts')

From the Q&A Mr. Musk also had some interesting comments:

"Any plans to add noise to the motor?" - from some old lady

-challenge is to avoid noise pollution, and to have proximity sensors to direct a pleasant noise in the direction of someone who walking.  So it is the least amount of noise, going in the direction it needs to go

"Are you having fun yet?" - are there any serious/normal people asking question?

- "I'm having a lot more fun these days! " Past achievements are more enjoyable in recollection, but were extremely stressful at the time.  But there is a steady improvemnt now

"Cars in the category of Model S tend to have a 6 year refresh cycle.  Sales typically peak in 2-3 years, so what the life cycle of the Model S? Where could sales peak?" - sharehold (who doesn't own a are)

- We don't have an existing service and sales infrastructure. I think peak sales will probably be in year 3 or 4, because it will take us a while to fully build out sales and service of the Model S...we want to make sure the car is available worldwide.  "In terms of when there will be a significant redesign of the Model S it is probably in the 6th or 7th year...with a mild refresh in the 3-4 year point"

Also be sure to check out a nice rant from the CEO on Tesla's interactions with state franchise associations at around the 50 minute mark:

...big hat tip to Josh Bryant on the video linkage!