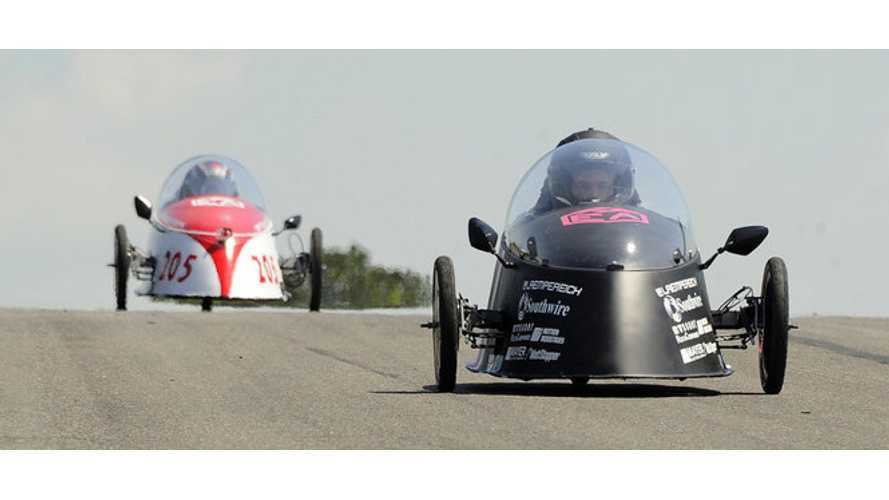 Just two weeks after Ryan Hunter-Reay, Scott Dixon and Helio Castroneves reached the podium in the Honda Indy Grand Prix of Alabama, students from several local schools took to the same track for a different kind of race. The second annual electrathon race in Birmingham, sponsored by the Alabama Power Co., Skilled Knowledgeable Youth, Zoom Motorsports and Barber Motorsports Park, gave students the chance to build their own electric vehicles and pit them against one another in a zero emissions contest.

Each of the seven teams competing in the high school division were given an electric motor, wheels, a fiberglass shell and a frame to get started. Those basic materials were provided free of charge by Skilled Knowledgeable Youth, thanks to $20,000 in grants. All the cars were required to be the same weight and to be equipped with basic safety features. Beyond that, students were given free reign to customize their vehicles in any way they chose.

The engineering team from Pensacola High School won the division, by completing 27 laps around the track in two hours. When asked what propelled them to the front of the pack, they attributed the victory to having heated their batteries in a convection oven before the race. They planned for this clever tactic by designing their EV to withstand the extra heat.

Among the other high schools competing were Hewitt-Trussville High School, Calera High School, Fairfield High Preparatory School, Oak Mountain High School, George Washington Carver High School and A.H. Parker High School. Auburn University was the only institution of higher learning that entered the race. Naturally, they won their division easily. In light of this, we expect the University of Alabama to be competing next year.

While average speeds in the race barely broke 30 mph, several of the students noted how fast the cars seemed to be moving because they were so close to the ground. Pensacola High School driver, Yahn Olsen, said he managed to hit 46 mph on one of the straights.

The significance of this event isn't measured by top speeds though. Organizers of the race hoped to show students how their courses in math, science and auto mechanics can be applied in the real world. It just so happens that racing custom built electric cars is a hell of a lot of fun too.