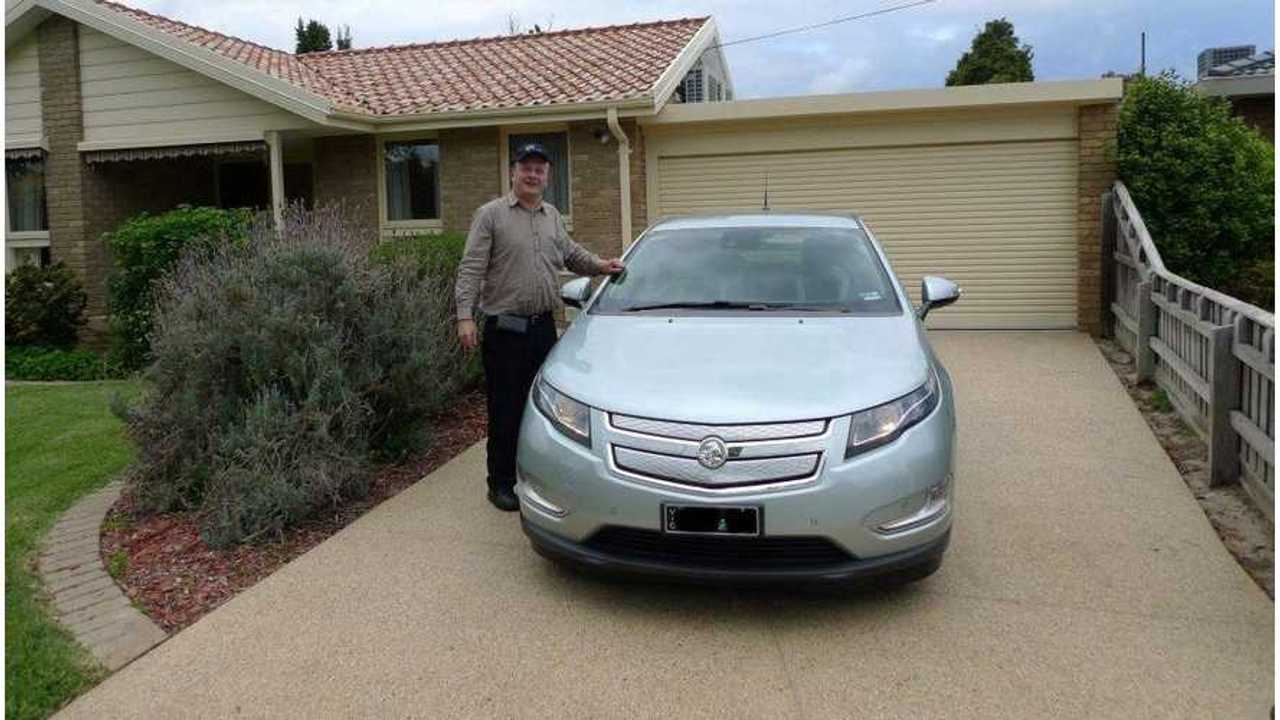 Editor's Note:  Last week Holden announced it would be delivering their very first Holden Volts in Australia, and we are fortunately to have one of those first owners walk us through the process and first impressions on the car. Our thanks to Martin.

My first impressions of the Volt were back in 2007 when I saw the concept car that GM’s Bob Lutz had a vision for.  I thought it was a very throughout practical way of actually doing a real  plug in EREV that would be financially feasible for a large company like GM.

I then followed this vehicle very closely as GM at the time were fully open with information / continually leaking via what is now the GM-Volt.com site and via GM themselves.  Little did I know about the amazing complexity and effort GM went into designing this product which resulted in this brilliant consumer product.

After About A Month's Extended Delay, The First Volt In Victoria Comes Home

So, I was  little a taken a back when this became at one point a political football in the US.  That chapter is over and I hope that US citizens will be very proud and support it as and into the future.

Compared to other offerings it Volt pampers it’s battery for long life, provides you with the maximum EV benefits for  it’s range and  doesn’t leave you stranded when your battery is depleted.  How can you beat that!

I decided to purchase the Volt - as I fully appreciate both its technology, what it  does achieve and a lifelong dream from a Childhood reading a futuristic book from our State Electricity Commission that the future would be electric.  And that included an electric car – which at the time left me wonder how?

When I heard they were about to take pre-orders back in June 2012 I jumped at the chance.  At first I was a little shocked that I couldn’t customise the car like in NA, only the exterior colour.  I rang round got the best price and place my deposit with an established dealer.

Luckily I was very patient - until I knew the car was in port Early November, then I started to call Holden and the dealer as to why the wait?  In the background I wasn’t too stressed as I was still finished the garage renovation and that was taking way longer than expected.

Meanwhile at home, my imported SPX charger was up and running very early on.  In the end the garage was fished 2 days before the delivery of the Volt – It’s all in the timing!

Delivery was very smooth with my dealer who dealt with me honestly over the whole process, it was a real pleasure for change.  It was their first Volt delivery and there was much interest at the dealership including a media person.

The car drives better than I ever imagined – very smooth, very quite with windows up you don’t even hear the EV buzz I was expecting,  knowing the sound of inverter controlled electric motors – in fact some regular gas cars who have their ECU buzz inside the passenger compartment our louder to me!  Regen is extremely strong I like that and have got used to driving everywhere in ‘L’ as I also love the electric park brake!

Hey look! The Steering Wheel Is On The Wrong Side Of Car

The Techno aspect of this car is simply just WOW along with its BOSE sound system. (Please people don’t play with this while driving as I don’t won’t local insurance premiums going up LOL J)

Steering is very precise and sharp – I like that &, handling is very good considering the weight of the vehicle, suspension is just right it’s a dramatic change from the usual US built row boat (Over soft suspension).  Pardon me for being so crass but us Ozzies from down under have been spoilt for a long time with cars that actually handled well in corners by comparison.

For Australia the only thing they didn’t do is change the indicator stalk to the RHS, so it’s like driving a typical Australian specked European  vehicle.

The brake pedal is a little too far  from the accelerator (for me), however with all the litigation over run away vehicles on other brands in the states, this does not surprise me that they increased the “space” for possible fat footed people?

One only negative is the front flexible ground skirt which I seem to be dragging on every driveway, I know it adds km’s to the range, but it just detracts from the luxury feel of the vehicle. I’m  reduced to driving over driveways like I’ve got a slammed Camaro in your language.

Note Fanatical Posters Of The Holden Volt In Anticipation Of Delivery

The Volt way exceeds my expectations  - it is still worth it here in Australia even though it is an expensive premium vehicle ($59,990 AUD, about $63,000 USD) without any Australian government subsidy – our current politicians still have their heads stuck in the sand over this issue.

I’m by no means a Greenie as they say locally. I’m just practical,  so I have 4kW of solar panels on the house roof and use off peak brown coal electricity at night that would otherwise be wasted (As you can’t turn down a coal fire plant for night) and I believe I’m doing more for the environment with owning the Volt than all the Hot air and false taxes our Politicians are spouting currently here in Australia and I not even a tree hugger!

So Love the Volt or Ampera, even if you are on the other side of the World in Europe!

From down under with the steering wheel and the roads on the wrong side.