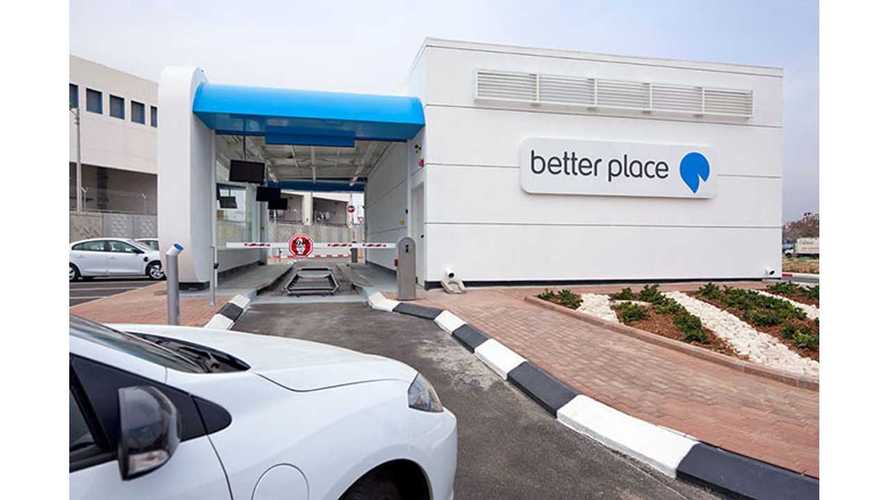 Better Place is a US-Israeli operation that features (in collaboration with Renault) an elaborate battery swap and recharge system for EV owners.  At the moment those swap station are available mostly in Israel (about 40 stations) and Denmark (about 20 stations), with an inaugural test station just opened in the Netherlands.

The problem for Better Place after raising almost a billion dollars, is that the company in 2009 committed to buy 100,000 swappable battery EVs from Renault by 2016, and at the halfway point of that timeline today they are still about 100,000 shy, give or take 500.  Breakeven/profitability was estimated to come at around 20,000 EVs on the roads.

This effort is lead by Israel Corp., which said in a statement that it intends to eventually contribute up to $67 million itself in two tranches over a period of up to one year.  As part of the deal, Better Place has the right to find "other" investors, in which case the amount Israel Corp. invests (and how much it owns of Better Place) could be less.  The company currently owns 30% of the electric vehicle swap station builder.

In a regulatory filing, Israel Corp said it had "received a review of the challenges and dangers Better Place faces as a growth company that is in the process of growth and development, which have led to some time delays and an increase in costs, factors that are typical of companies at this stage...And that this investment round is intended to allow Better Place to continue to develop and realize its plans as it prepares for the next stage of the company of commercial operations and meeting customer needs/tastes"

From the outside, what it seems like is that Israel Corp is unwilling to let the (estimated) $250 million it has already invested in Better Place swirl the drain, and is hoping this latest investment can provide Better Place with enough time to finally figure out how to make their business model work.

Better Place lost $132 million in the first half of 2012, and about $500 million since its inception.  Last month the board of directors removed founder Shai Agassi, from his duties as CEO of the company.
++Share