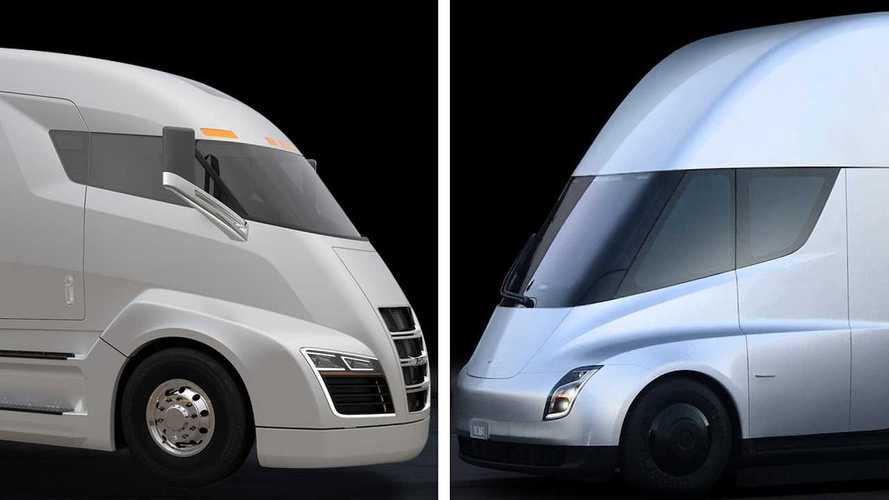 How do these two future vehicles stack up?

OP-ED: Is Nikola The Next Tesla? Is Mainstream Fuel-Cell Tech Vaporware?
⠀

Nikola: Three OEMs In Running For A Joint Venture On Badger Pickup Truck

Semi-trucks might not be the sexiest of vehicles but they represent a key market for cleaner transport. For carbon emissions to drop worldwide, semi-trucks will be crucial. Recently, there's been a lot of media buzz about the Tesla Semi and Nikola One. Yet these two Semi-trucks are entering the segment with two completely different implementations. Tesla is all-electric while Nikola is choosing the more controversial hydrogen fuel cell route. So which will be better?

Similar to most Class 8 trucks, both the One and Semi will be able to tow up to 80,000 lbs. Nikola claims that their Semi will hit 60 mph in 30 seconds, whereas Tesla states their Semi will do it in just 20 seconds. Nikola is promising a range of between 500-750 miles (this means, however, refueling at non-existent hydrogen stations). Meanwhile, Tesla will have two different versions of their Semi, one with a range of 300 miles and another with a range 500 miles.

Price is another question mark for Nikola — the company hasn't provided the price of their semi-truck. Tesla, on the other hand, has stated that their 300-mile version would cost around $150,000 while their 500-mile version would start at about $180,000. To put this in perspective, pricing of a Freighligher Cascadia, one of the most popular semis on the road right now, is anywhere between $130,000 to $160,000. So Tesla appears to be within a typical, industry-standard price range. As for Nikola, the jury is still out.

Perhaps the biggest differentiator between the two, and probably most relevant in the decision-making process, is the powertrain. The Tesla Semi uses an all-electric approach while the Nikola One uses a hydrogen fuel cell system (similar to the low-selling Toyota Mirai).

Another issue: the lack of hydrogen refueling stations. According to the Department of Energy, there are only 49 hydrogen fueling stations in North America, with almost all of them within California. Meanwhile, Tesla's Supercharger Network is massive. In addition, there's also a fast-growing EV charging infrastructure that's non-Tesla specific (but still compatible with Tesla) as well.

At this point in time, the biggest "positive" that hydrogen has over fully electric is faster refueling time — assuming you can find a station. But keep in mind: battery and charging tech has rapidly been improving charging times. And the efficiency of battery electric vehicles remains a massive advantage. By the way, it's not just Tesla that feels this way. This chart (see below) from Volkswagen explains why their vote is for electric instead of hydrogen fuel cells.

Not surprisingly, with all these strikes against hydrogen, Nikola hasn't put all its eggs in one basket. While they're definitely pushing for hydrogen fuel cells, they plan to have electric versions of their Nikola Two and Nikola Tre, albeit with shorter ranges compared to their hydrogen counterparts.

Will Nikola be able to keep up their momentum in the coming years until their hydrogen semi enters production? Will they continue with their hydrogen approach or transition to fully electric? Will their vehicles ever actually get to production? So many questions left to be answered.

Infographic: EVBite; Note: an earlier version of this article appeared on EVBite. EVBite is an electric vehicle specific news site dedicated to keeping consumers up-to-date on any developments in the ever-expanding EV landscape.