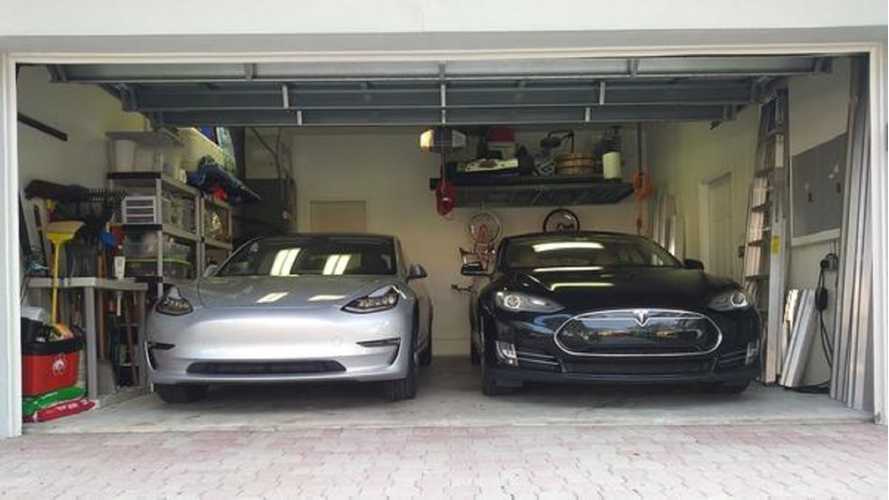 I've been driving a Tesla Model S for about 4.5 years now, and have driven about 90,000 electric miles. I absolutely love my 2012 P85, and will never to go back to an internal combustion engine car again. In fact, we just purchased my wife's new 2018 Long Range rear-wheel drive Model 3 and our household now has 100% electric transport.

*This article comes to us courtesy of EVANNEX (which also makes aftermarket Tesla accessories). Authored by Jorge Sierra. The opinions expressed in these articles are not necessarily our own at InsideEVs.

One of the questions I most often encounter (from others interested in a Tesla) remains: “Is it better to purchase a CPO Model S or a new Model 3?”  Having now driven and experienced my wife’s Model 3 for some time puts me in a good position to answer that question and provide a little perspective.

For a subjective comparison, I put together a spreadsheet with a side-by-side comparison of the features in my 2012 Model S P85 vs my wife’s 2018 LR RWD Model 3.  In addition, for the features missing from my car, I put an approximate timeframe of when those features became available in Model S.  This should serve as a good guide to anyone on the fence between a CPO Model S and a new Model 3.

Above: A list of features lacking in a 2012 Model S that are available in Model 3, and, when they became available on later versions of the Model S (Source: Jorge Sierra)

When you look at the list of unavailable features and the time frames in which they became available, you can see it’s not such a cut-and-dry decision as to whether or not one should buy a similarly priced CPO Tesla Model S or a new Model 3.

Here is the list of features that are available in a 2012 Model S has that are not available on Model 3:

Of course, being a much larger vehicle, Model S has more storage space than Model 3.  The Model S frunk is significantly larger than Model 3, particularly early rear-wheel drive models such as mine.

The acceleration of my P85 is noticeably quicker than Model 3, but Model 3 is certainly no slouch.  It has more than sufficient acceleration for getting on the highway and passing. Model S handles well, but compared to Model 3 it feels a bit more “floaty”, as you would expect from a very large sedan.  I feel much more connected to the road in Model 3, and it has near-zero body roll.

Although my Model S comes with free supercharging, it is a first gen battery and is limited to 90 kW supercharging.  The long-range Model 3 can supercharge up to 135 kW and has a much longer range. This allows Model 3 owners to save more time (saving hours of supercharging time on longer road trips). In addition, paying for supercharging is still much less than paying for gasoline.

Both vehicles have upgraded sound systems, but the Model 3 system sounds better.  The smaller cabin and better sound insulation of the Model 3 make the acoustics better, and I think it’s a higher quality system.  Even phone calls made through the Model 3 sound much better than in my Model S.

The only major feature my Model S has that I really miss in Model 3, is the ability to keep climate control on from the touchscreen, when exiting the vehicle.  I often make quick stops at the grocery store, pharmacy, hardware store, etc. With a couple of taps of the touchscreen, I can keep the A/C running and the car stays cool in the hot Florida sun.

The good news: that feature could easily be added in a firmware update.  As a workaround, after exiting Model 3, you have to launch the smartphone app and reactivate climate control.  It’s a bit of a hassle, and it’s much more convenient to do this via the touchscreen.

Another thing to consider is the differences in warranty.  If you purchase a CPO Model S with fewer than 50,000 miles, you get a warranty similar to what you would with a new Model 3: 4 years/50,000 miles, whichever comes first.  For battery and drivetrain, you’ll receive whatever is remaining on the original warranty.

If you purchase a CPO with over 50,000 miles, the “frunk-to-trunk” warranty is cut to 2 years/100,000 total odometer miles, whichever comes first.  Most if not all CPOs that are comparable in price will likely fall into this warranty category.

Taking into consideration current CPO prices, and the full $7,500 federal tax credit still being available for Model 3, I would say it is probably better to buy a new Model 3.  You’ll get more (and better) features than you would with a CPO Model S, and likely a better warranty as well.

If you can manage to find a 2015 (or newer) 85 kWh (or larger battery capacity) Model S with under 50K miles for less than $45,000, then it may be worth getting the CPO.  I would review the list of available features, and try to do an apples-to-apples comparison to a new Model 3. However, I think it’s extremely unlikely to find such a deal at this point in time.  Perhaps as the fleet continues to age, some vehicles matching that criteria may come available.

*Jorge Sierra has been a Tesla Model S owner since June 2014 and has rolled about 90,000 electric miles since then.  Jorge is the creator of Radar Alerts for Tesla vehicles, and is also an active member in the Tesla subreddit under the handle GeekLad.