It's definitely insane, but is it super?

When GM announced its plan to revive the Hummer it caught most truck enthusiasts, as well as industry experts, by surprise. Could an electric vehicle live up to the Hummer reputation of being the biggest, badest truck on the block? After our 30-minute ride and drive in Hummer EV Edition 1 we can't necessarily say yes just yet, but we walked away thoroughly impressed.

We drove an Edition 1 Hummer which sold out in only ten minutes after GMC opened up the online ordering process in October of 2020. Once existing orders for the Edition 1 are filled, GM will begin making down-market versions. The EV3X is scheduled to appear in the fall of 2022 for $99,995, followed by the EV2X in the spring of 2023 for $89,995, and finally the EV2 in the spring of 2024, starting at $79,995. Unlike the original Hummer, the Hummer EV is being sold through the GMC dealership network, it's not a stand-alone brand.

One point to note is that since we were at GM's Milford, Michigan proving grounds, we were not allowed to bring any cameras or recording devices onto the property. Instead, GM provided us with pictures and video footage of the event. It's not unusual for that to be the case when we visit automakers' test tracks, as there are other vehicles using the facility, and some of those haven't yet been announced.

Our test drive consisted of about 30-minutes of driving with a mix of on and off-road excursions. First off the Hummer EV has five different drive modes, four pre-configured modes: Normal, Off-Road, Terrain, Tow/Haul, and My Mode, which allows the driver to configure settings like torque distribution, four-wheel steering, ride height, shock damping, throttle maps, regenerative braking, and interior sound enhancement, all to their liking.

We were able to do a short rock crawl that was about 50-feet long and had some substantially sized boulders to traverse and the Hummer EV handled it without breaking a sweat. The 18-camera UltraVision system is extremely helpful as it allows the driver to view under the vehicle as well as both sides of all four tires.

That's a very handy feature to have when crawling over rocks, as the most vulnerable part of the vehicle is the sidewalls of tires and the UltraVision allows you to clearly see if you're about to slice one of them on a sharp rock or tree root. The Rivian R1T I recently drove also has cameras positioned to view the outside sides of all four tires - but not the inside, as the Hummer EV does. The cameras also have a washer feature to clean off the lens when needed - and it was needed - quite often, actually.

The Hummer EV has a blended braking system and applies the friction brakes as well as the regenerative braking system in Terrain mode to provide true one-pedal off-roading. The system grabs the Hummer before it can roll backward, even when climbing over large rocks. I noticed how easy it was to drive the Rivian R1T over extremely rough terrain and the Hummer EV gave me that same level of confidence because of how controllable it feels with the one-pedal driving characteristic.

The vehicle we were in didn't have the Extract mode feature enabled. Extract mode raises the truck's air suspension system six inches, for a total of 15.9 inches of ground clearance.

Four-Wheel Steering and the Crab Walk

Auto mode - The rear tires turn in the opposite direction of the front tires at low speeds to help improve maneuverability in tight situations. While driving at higher speeds, the rear wheels will turn in the same direction as the front wheels.

CrabWalk - A feature that at low speeds turns the rear wheels at the same angle as the front wheels (up to 10-degrees), allowing diagonal movement of the vehicle, and a greater range of maneuverability in tight off-road conditions.

I was able to drive the Hummer EV in both four-wheel-steering modes extensively, and I was really impressed. The CrabWalk feature feels so unnatural because the vehicle really moves sideways as well as forward. It's not gradual - it really "slides" to the side in the direction that you're steering and my first instinct was to stop the vehicle to process the directional movement.

But CrabWalk isn't meant to be used to drive down a long road as I was doing. It's really just meant to get you out of a tight situation - and I can definitely see how it would be capable of doing just that.

Auto mode isn't as disorienting as CrabWalk, but it is also very impressive. It allowed the Hummer to turn more sharply, improving maneuverability and tightening the turning circle. In fact, the Hummer EV has a 37-foot turning radius which is about 10-feet tighter than that of a Chevy Silverado, Ford F-150, and Dodge Ram 1500.

Watts To Freedom, or "WTF" Mode

WTF is kind of what I was thinking when we made a couple of Watts To Freedom runs. Unfortunately, the journalists weren't allowed to do the WTF runs ourselves, the GM engineers that came along took over for that portion of the test drive. I'm pretty sure part of the reason is so they could surprise us with the sudden intense launch. When you're driving, you know exactly when it's coming, and you are better prepared.

When you select the Watts To Freedom (which is basically a launch-control mode) you get audible and haptic feedback as well as a visual demonstration on the center display while the vehicle prepares for WTF. You then need to confirm that you want to enter WTF mode and the truck lowers itself by 2". The driver's display then tells you to fully depress the brake pedal and then do the same for the accelerator.

When you're ready to launch, you simply pull off the brake, and the Hummer EV launches with voracity. It doesn't just slam you back into your seat - you feel like you're glued to it. In the past month, I've driven the new 2021 Model S Long Range, the Rivian R1T, and the Lucid Air Dream Edition Performance, all of which are incredibly fast EVs, and the Hummer EV's WTF launch actually felt the fastest in the launch.

I know it's not the fastest - it might even be the slowest of the four, but I can say it definitely felt at least as fast as any of them from a standstill, and that's something. Perhaps it's because it's a 9,046-lb monster with aggressive 35" off-road tires and pipes artificial sound into the cabin as you take off. Maybe it's because you're sitting so high up in such a spacious truck that it catches you by surprise. Whatever the reason, the initial launch is punishing, and it feels like you're not only being pushed into your seat, but through it. Just check out my reaction in the video - you can't fake that. 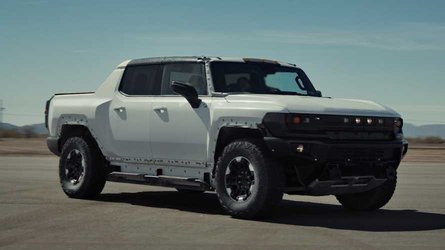 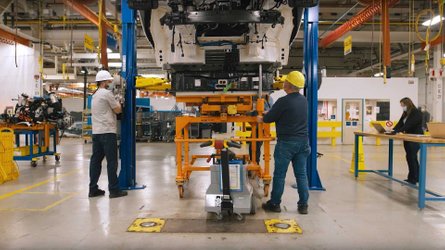 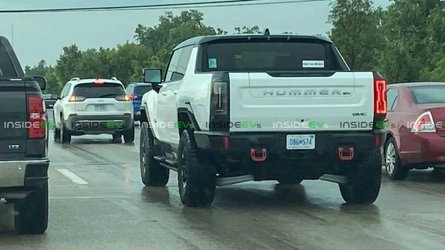 We Spotted The Hummer EV, And Its Acceleration Blew Us Away
⠀ 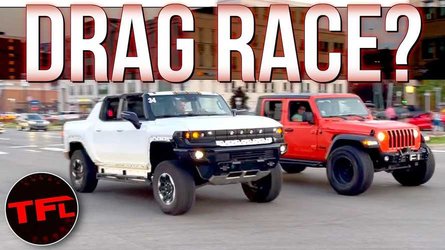 Is it the SuperTruck that GM Promised?

The jury is still out because we need some more time behind the wheel to make that declaration, but from what we see so far it looks like GM has itself an amazingly capable electric vehicle that's really fun to drive. Is it worth $112,595? It is if you consider the 2006 Hummer H1 Alpha cost even more, and that was 15 years ago. Plus, the H1 wasn't nearly as comfortable or as powerful as the new Hummer EV Edition 1.

The mild off-roading tests we did were nothing like the 30-mile extreme off-road excursion we took the Rivian R1T on recently, and quite honestly I don't think the Hummer EV could have made it through some of those trails because the vehicle is simply too wide. We'd still like to get the Hummer EV out on some proper trails to really see just how off-road capable it is.

The 1,000-hp tri-motor powertrain with roughly 1,200 lb-ft of torque and air suspension makes the 9,046-lb pickup truck feel nimble and much lighter than it actually is. It's an absolute blast to drive and you'll have endless fun punishing your passenger friends with sudden acceleration bursts, just make sure you have the GoPro positioned properly, so you can send them the video clip after they stop yelling at you.

Hopefully, as customer deliveries near, we'll get the chance to take a Hummer EV out for a proper test run, including range tests, DC fast charging recordings, and we'd also like to see how well SuperCruise works. The Hummer EV, with its 800-volt Ultium battery pack, is said to be able to accept up to 350 kW, and that should be good enough to add back roughly 100 miles of range in 10 minutes. It all sounds great, just give us one to confirm all the promises before we declare the Hummer EV a true SuperTruck. That said, so far, so good.