We take the ID.4 out for a spin in New York City

The ID.4 is arguably the most important vehicle in Volkswagen's new era of electrification. Therefore, we have been anxiously awaiting a chance to take one out for a proper test drive review. We got our chance to drive one last week, however, due to COVID-19 restrictions, we weren't quite able to perform the full range of tests we like to do when we do our first-drive reviews.

Still, even with the limited time and less than ideal driving conditions of the congested streets of New York City, we were able to learn some new things and form a solid opinion on the vehicle.

Volkswagen had the official ID.4 reveal less than two weeks ago and will begin customer deliveries of the First Edition model before the end of 2020. When Volkswagen opened up online ordering in the US, the demand was so great that the flood of potential customers crashed the website.

The ID.4 we drove was a prototype and we had only 45 minutes with the vehicle. We were initially told that since we would be driving a pre-production prototype that no video or photos were going to be allowed (not completely unusual for prototype media drives), but we were later informed that we could photograph and take video but only inside the vehicle.

The first thing you notice when you get into an ID.4 is how much interior space the vehicle has. However, unlike some other EVs, the ID.4 doesn't have a frunk. That's because Volkswagen preferred to maximize the passenger compartment space, and in doing so they needed to push the air conditioning equipment forward to where the frunk area would be.

While I like the idea of an additional storage compartment in front of the vehicle, the ID.4 doesn't need it because the interior is so spacious. In addition to a huge passenger compartment, the ID.4 has over 30 cubic feet of storage space with the rear seats up and more than 64 cubic feet with the 60/40 split rear seats folded down. 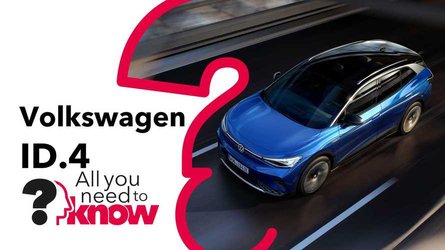 Volkswagen ID.4: Video Presents Everything You Need To Know 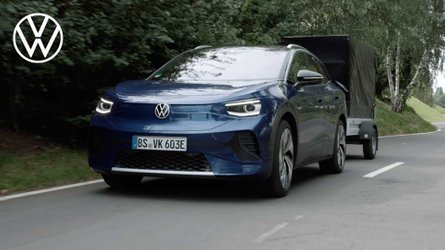 Obviously, we could have gotten a more thorough understanding of the ID.4 with a proper day-long drive on roads where we could open it up a bit. That said, the time we had was impressive. The ID.4's interior cabin is spacious, open, and very well laid out, with a minimalistic theme but not lacking features or amenities that buyers would miss.

The 12" optional center display screen (a 10" screen is standard) is easy to navigate and very responsive, much better so than previous Volkswagen infotainment systems that we've seen. Volkswagen must have spent a lot of time and energy working on this system because it's much brighter, clearer, and snappier than anything I've used in a Volkswagen before.

There are four driving modes; Eco, Comfort, Sport, and Custom. Because of the brevity of my drive, I couldn't test out the various modes and elected to drive in Sport mode. The ID.4 First Edition is rear-wheel drive and has a 201 hp motor. Volkswagen hasn't released an official 0-60 time, but representatives say we can expect a mid 7-second time and that estimate felt about right during my drive.

There will also be an all-wheel-drive variant coming in 2021 and that version will boast a total of 302 hp. That should be good enough to propel the ID.4 to 60 from a standstill in about 6 seconds, if not, slightly better. Personally, I believe the ID.4, even the rear-wheel-drive version is more than powerful enough for the job. Not every electric vehicle needs to set quarter-mile records. For most families, their vehicles just need to be able to accelerate quickly enough with a full-load to be safe.

Gallery: Check The Official Pictures Of The Volkswagen ID.4

Because of this, true one-pedal driving isn't possible in the ID.4 because the lift-off brake regeneration simply isn't aggressive enough. That, plus the fact that there is an artificial creep feature that cannot be disabled. That's definitely one thing I'd like to see Volkswagen offer in a future software update, the ability to disable artificial creep if the owner so desires. I even expressed that view to the Volkswagen representatives after my drive.

Volkswagen seemed to do a great job of noise cancellation because the ID.4's cabin was quiet and peaceful, even with the loud noises and sirens of the city right outside the vehicle. However, I can't really comment on the potential wind noise at highway speeds, since I barely got the ID.4 up over 45 mph during the entire city drive.

We obviously couldn't test the 82 kWh (77 kWh) ID.4 for the driving range, but Volkswagen has estimated the EPA rating will be about 250 miles per charge. If that seems a little low for such a large battery, it may be that Volkswagen is under-promising, and when the EPA rating comes out it will be a little more than 250 miles.

The range estimator in the ID.4 I drove indicated the vehicle would go further than 250 miles with a full charge, but again, that was based on city driving, which would usually support a driving range longer than the EPA rating. Still, that was better than seeing a range estimate of less than what Volkswagen was promising.

Another regret I had because of the short time was I never had the opportunity to really check out Volkswagen's new ID Light feature that's basically an interactive light strip at the base of the windshield. The light strip responds to verbal commands and communicates messages to the driver like when the doors are locked or unlocked as well as navigation alerts. We're hoping to get a production ID.4 in the future so we can really dive into the ID Light and determine if it's actually a feature that is of help to the driver.

So check out the video and let us know what you think. Do you think the ID.4 is going to be as big a success as Volkswagen is planning and becomes the brand's "Beetle of the 21 century?" As always leave us your feedback in the comment section below.