An angry car for nice people.

My friend was recently telling me that only nice people drive Volvos. I paused, really thought about this, and decided he was right. When’s the last time you’ve seen a Volvo owner cut someone off or flash their high beams at a left lane hog? My friends who drive Volvos are all sensible and nice. My accountant drives a Volvo and she's very nice. But now Volvo has decided to make a car that’s angry. A pumped-up performance version of its very sensible V60 wagon. Are they crazy? 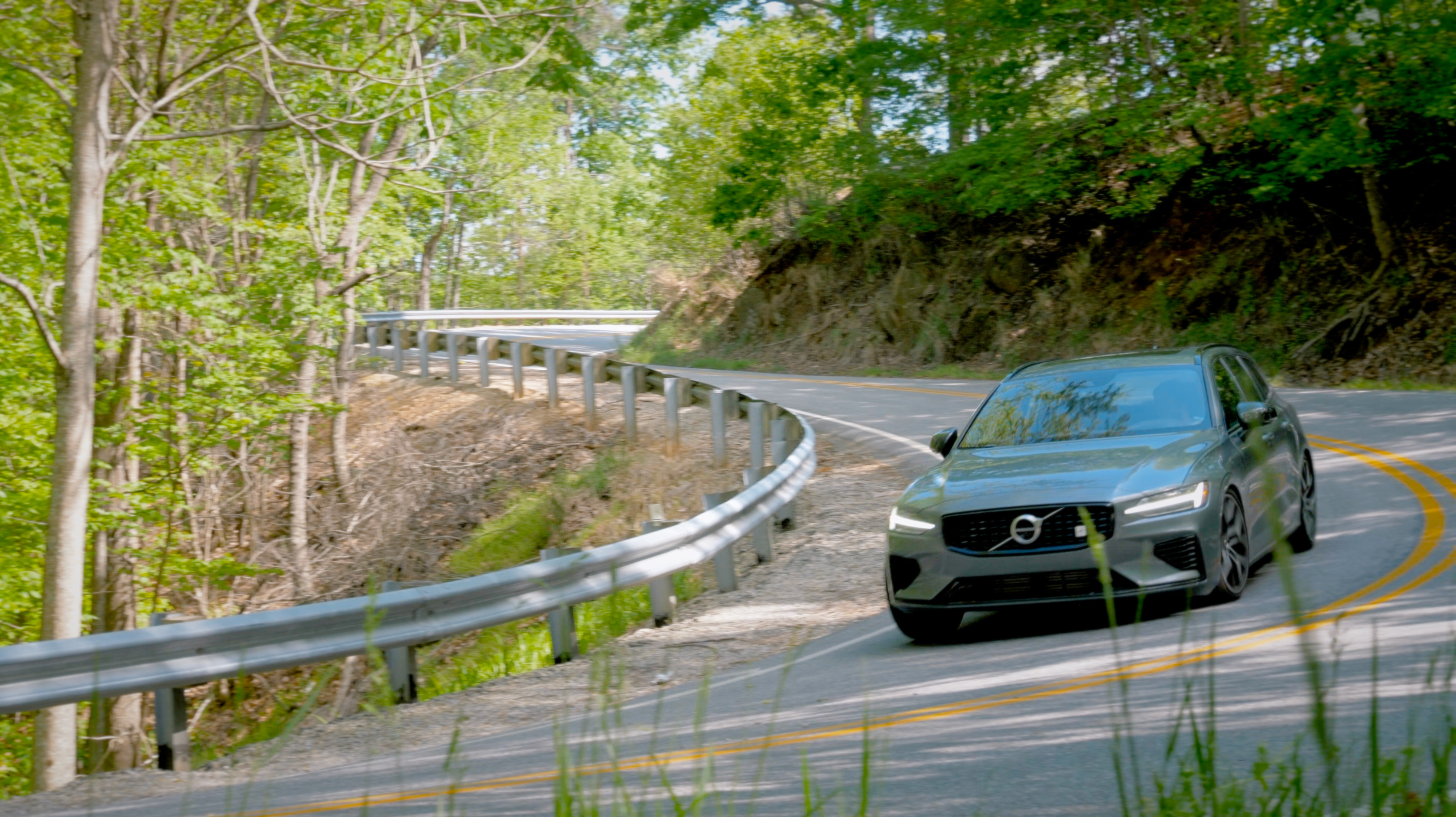 Actually, Volvo is no stranger to hot versions of its cars. From the legendary days of the 240GT, which won the European Touring Car Championship in 1985 to the 850 T-5R in that memorable and extremely rare Cream Yellow color, Volvo has been making pumped-up versions of their safe and practical cars all along ... just nobody knew about them.

So, what we have here is an electrified 415hp Swedish sports wagon with massive brakes and trick suspension from the internal skunkworks team at Volvo: Polestar Engineering. While the changes look minor on the face of things, let me assure you, there is a complete change of character under the skin. I spent the last two weeks and nearly 2,000 miles with the V60 T8 Polestar Engineered trying to figure out who Volvo made this car for. And then I realized, it’s me.

This is where things become interesting. Volvo has taken the approach that it should use all performance-enhancing technologies short of jet propulsion. The T8’s front wheels are powered by a 4-cylinder engine that is turbocharged and supercharged and then paired with a 65kW electric motor on the rear axle. There is no physical connection front-to-rear axle. Instead, the 11.6kWh battery pack fills most of the drivetrain tunnel, and software determines the power distribution.

You can easily drive around town using electric power alone. It’s managed in a clever, yet not perfect way. When driving in “Hybrid” or “Pure” (eco) mode, there is a dead spot in the accelerator pedal mapping that allows you to bring the car to the maximum electric power before kicking the gas engine on. This works well, but occasionally I’d notice that I pushed my foot too hard down and accidentally kicked on the engine. I have to note that there is no perceptible way to notice the engine has kicked on if you are listening to music even at a low volume. The only indication you have switched to dinosaur juice is a little water droplet on the gauge cluster. It is impressive how seamless this powertrain works together.

While in Pure mode I would have preferred to have been able to fully depress the accelerator pedal and still have the car locked in EV mode, similar to how BMW does with its PHEVs. If you happen to need full acceleration in a pinch, just depress the kick-down button at the bottom of the pedal to kick on the ICE.

Dial up Polestar Engineered mode and the combustion engine takes over the main duty of moving the car and utilizes the electric motor for a boost when you go deep into the pedal. This makes for a seriously sprightly car. I maintain my position that the V60 Polestar wagon is the fastest and stealthiest way to get across town unnoticed, don’t ask me how I know.

Plug-in hybrids start to really make sense when there is charging available at most opportunities. We all know when the traction battery is charged up in any PHEV, the driving experience is much improved. You have electric-only driving and extra power when you put your foot down. Volvo hybrids sadly only have a 3.7kW onboard charger with no DC fast- charging option. This makes topping up reasonable during mid-day breaks but would be nice to have a 7kW+ charge rate.

I tried to plug in at every opportunity given how short the electric range is and would have been able to drive more on electricity if there was a faster onboard charger. An interesting quirk with the lock on the charger (noticed on other European PHEV / EVs as well) – you have to physically click the unlock button on the key fob to stop charging and unlock the charge port. I suspect this is carryover programming from Type 2 units that don't have an unlock switch like Type 1 J1772 handles have.

Speaking of electric range, I was able to squeeze 25 miles out of one charge in Pure mode, which allows a deeper discharge of the high voltage battery during my testing. Perfect for all daily needs in a metropolitan area. Once the battery drains, the ICE engine turns on and essentially turns the drivetrain into the T6 variant with more weight to haul around. The power is adequate and there is always a small reserve of battery power to provide a boost during full-throttle bursts. The only downside when the high voltage battery goes flat is the power dip during gear changes where the electric motor will compensate when it has energy.

Plug your destination into the in-car navigation system and it will intelligently figure out when to best use the combustion engine and electric power to give you the most efficiency along your route. Pretty neat! The car also has a manual state of charge (SoC) hold mode and a function to charge the battery from the gas engine.

This Volvo wears the Polestar badge on the back so it should be good. And it is good! With the dampening on the manually adjustable Öhlins suspension dialed into the Polestar performance recommended settings, the V60 transforms into a seriously harsh riding corner carver. I have never experienced a factory adjustable suspension system that changes the feel this much. I also love the fact that this wagon requires a workshop lift to adjust the rear suspension calibration. In my case, I parked the car with a wheel in the air over a curb to reach the rear adjustment points.

To test the performance, I first took the car to the Blue Ridge Mountains. This is home to some of the best driving roads on the east coast. Dialing up the settings to Polestar Engineered and engaging manual shifting to keep the revs up really woke this car up. Linked here is a video I shot of the performance dynamics for the Out of Spec Motoring YouTube channel that goes in-depth on how this car drives when pushed hard. You want the quick synopsis? Brakes are incredible, power is strong, drivetrain doesn’t like to be pushed hard for long as there is some power surge and delay when things heat up, and the exhaust sounds like a vacuum cleaner at full chat.

The V60 surprised at the test track. The traces of the power delay out of corners were gone likely due to higher speeds and increased airflow. Also, the shove was strong and did not diminish at higher speeds. Now, this is no Tesla P100D in terms of acceleration, but it is Starbucks-spilling quick and it did not lose one red-light drag race during my time with it … not that anyone knew we were racing. Around the tight sections of our track, the suspension calibration was spot on. Throwing this car into a corner provided positive weight transfer, not a hint of understeer, and enough compliance to keep the tires on the ground without wallowing.

It is a shame that many owners of this practical station wagon won’t experience it on an open circuit because this is where the suspension and braking systems truly shine. When pushing it around the track, the fastback section flew past giving me only a few seconds to have a sip of my Starbucks Refresher before slamming on the anchors for some tight corners while performing a Scandinavian flick in honor of this car’s Swedish heritage to induce some lift-off oversteer.

For a primarily front-wheel-drive chassis, this car likes to wag its tail when thrown around. I was truly impressed. The Sport ESC (no way to fully disable nannies) stays out of the way for the most part. The only glitch was when the brakes get hot from working hard due to not having a mechanical limited-slip differential (simulates this with braking power), traction control would disable and then quickly re-enable to full-on. To see my quick take on this car around our track, check out this video on my new channel, One Lap.

Having spent time with the entry-level V60 T5 Momentum earlier in the week before the T8 arrived, I was curious what would be lost. The normal V60 is about as good as it gets for a practical, stylish, premium daily driver. I thought the T8 could have less cargo space due to the battery pack, an unbearably harsh ride, and a clunky hybrid drivetrain. After my time with the T8, I can truly say there are no compromises with the Polestar upgrades. The hybrid system is seamless, the battery pack uses up existing space under the center console, which does have a slight redesign for the T8 but I prefer it, and the ride is more than livable when set to the comfort settings.

Everything that is great with the normal V60 remains. The world-class, gut-busting, Bowers & Wilkins sound system will blow any audiophile away with sound envelopment, clarity, and window shattering bass. The UI system’s responsiveness has improved compared with earlier Geely era Volvos, my favorite feature being direct Spotify integration with high bitrate audio streaming. The seats are the same units from the R design trim and if they were available with cooling and massage function, they’d be the best in the business. Also, the Pilot Assist suite of driver assistance functions is incredible on long highway stretches, keeping you centered in your lane and at a proper distance to the car in front while all relevant info is displayed in a hologram through the head-up display.

Too good to be true? Well, this is where I have to bring us back to reality with the price. The only option available on a Polestar Engineered V60 is color, which my tester was finished in Osmium Gray. It would be great to bring back the Polestar Blue color for some pop. As tested, this car stickered out at $68,940. While it seems expensive given the fact that the entry-level T5 starts at around $40k, I’d argue this car is worth the money. Volvo wagons, especially fast versions, hold their value very well and are a sought-after piece years down the road by enthusiasts. If you want a stealth, electrified, technology-filled dog hauler that gets attention from only those in the know, look no further than the Volvo V60 T8 Polestar Engineered.