The rate of growth and consistency is really amazing. If nothing changes, BYD is expected to reach 250,000 units per month before the end of this year.

The overwhelming majority of BYD sales are in China, while exports stand for a few percent of the total result.

Another big milestone for the Chinese manufacturer is that, for the very first time, sales of all-electric cars exceeded 100,000 in a single month. In October, BYD sold 103,157 BEVs (up 150% year-over-year). Plug-in hybrids continue to be slightly ahead of all-electric cars in terms of volume and rate of growth.

Some 9,529 BYD plug-ins were exported, which also is a new record. Besides passenger cars, BYD sold 298 commercial electric vehicles for a total of 217,816 plug-in vehicles last month.

So far this year, the company sold over 1.39 million plug-in electric cars, more than tripling its volume compared to 2021.

During the last 12 months, the company sold more than 1.5 million plug-ins, while the cumulative number is at 2.9 million. 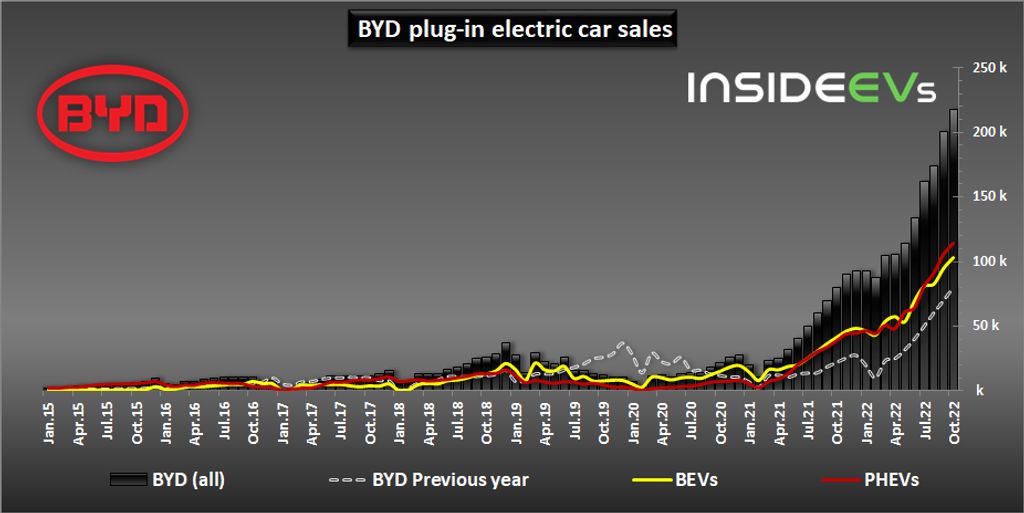 As usual, many individual models set their wn monthly records as well. The top one is the BYD Song, which noted a total of 56,843 (BEVs and PHEVs).