Lotus has announced pricing and specifications for its first all-electric SUV, the Eletre, during a global news broadcast called "Unleash the Future" (see video above).

The Eletre is the first of a new breed of pure electric SUVs, and Lotus says it takes the soul of its latest sports car—the Emira—and the aero performance of the all-electric Evija hypercar, and reinterprets them as a Hyper-SUV.

Three different versions are available—Eletre, Eletre S and Eletre R—with the choice of two powertrains. The rear-wheel-drive Eletre and Eletre S feature a single motor system rated at 450 kilowatts (603 horsepower) and 710 Newton-meters (523 pound-feet) of torque, while the all-wheel-drive Eletre R has a dual-motor setup capable of 675 kW (905 hp) and 985 Nm (726 lb-ft).

The Lotus Eletre and Eletre S deliver a 0-62 mph (0-100 km/h) acceleration in 4.5 seconds, while the Eletre R covers the same sprint in just 2.95 seconds and hits a top speed of 165 mph (265 km/h). This makes the Eletre R the world's fastest dual-motor pure electric SUV—though the Tesla Model X Plaid is very close with a top speed of 163 mph (262 km/h) and slightly quicker acceleration to 60 mph.

Prices start at £89,500 in the UK and €95,990 in Germany for the Eletre base model, which equates to about $95,700. For this kind of money, customers will get plenty of standard kit, including five drive modes, active air suspension, torque vectoring, matrix LED headlights, active front grille and 22-inch 10-spoke forged wheels.

Moving on to the Lotus Eletre S, it starts at £104,500 in the UK and €120,990 in Germany, and it offers numerous additional standard features such as privacy glass, active rear spoiler, configurable ambient lighting, illuminated side sills, soft door close, auto-dimming side mirrors and an air quality system. It also comes with a 2,160-watt, 23-speaker KEF Reference Audio.

The range-topping Lotus Eletre R is priced from £120,000 in the UK and €150,990 in Germany, and adds a standard Track Mode that's exclusive to this trim level. Track Mode provides a lowered ride height, and more performance-oriented settings for the dampers and anti-roll control. It also includes a fully open active grille and a launch control.

The Eletre R also features the Lotus Dynamic Handling Pack, Carbon Fibre Pack, gloss black wheels, stainless steel sports pedals, black badging and high-performance tires. And get this: the high-performance SUV will eventually be able to drive itself on the Nürburgring-Nordschleife. Why, though?

The company says it has thousands of deposits for the Eletre from customers around the world. Besides the UK and eight western European countries (the UK, Germany, the Netherlands, Belgium, France, Italy, Norway, Sweden and Switzerland), the Lotus Eletre will be available in North America, Middle East, Asia Pacific and other regions starting from 2024. Prices and specifications for these markets will be announced closer to launch. 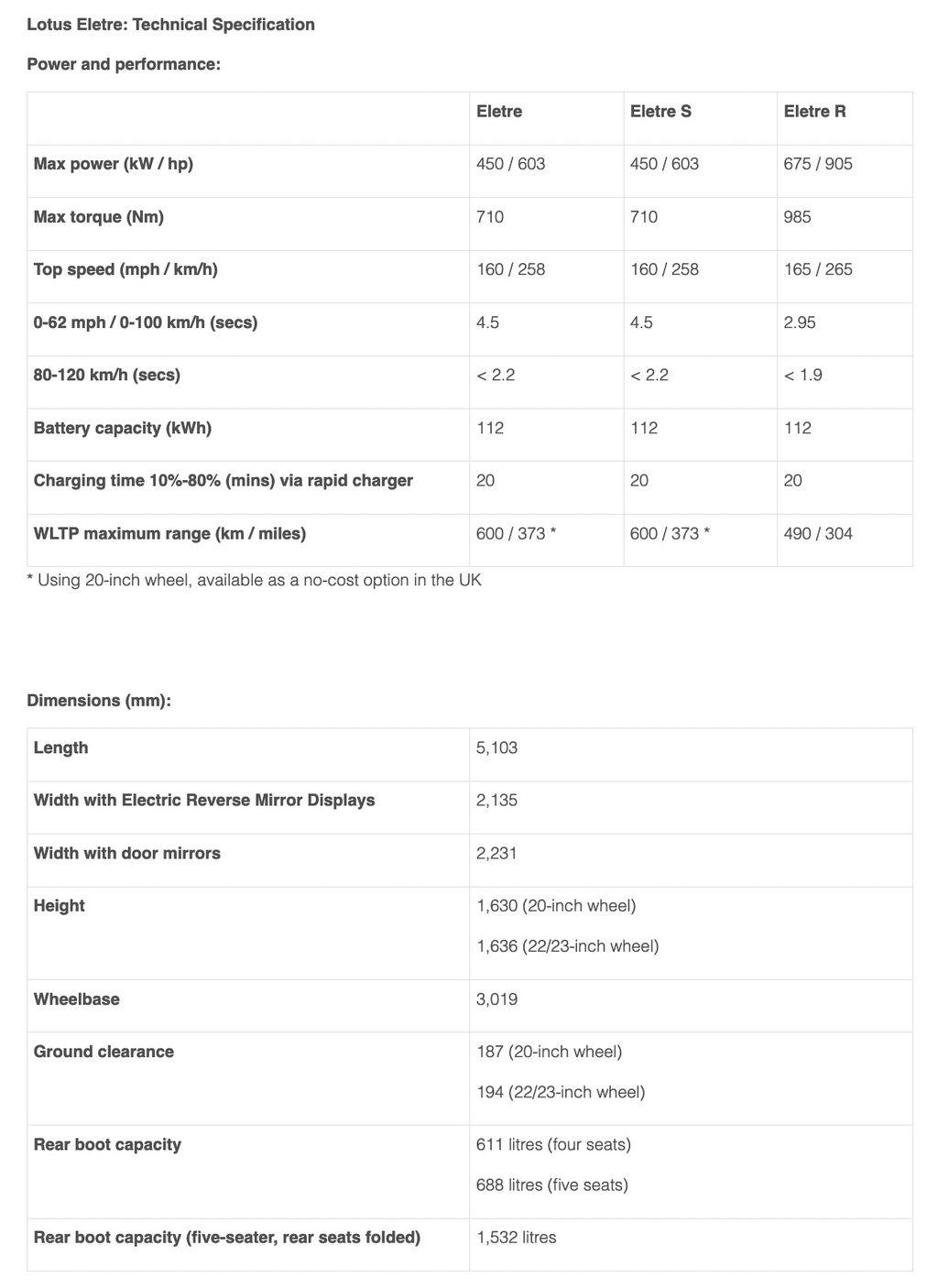 Tesla Model Y Steering Wheel Falls Off While Driving, One Week After Delivery
Tesla Model S/X Get Fresh $3K Discount Or Free Supercharging In US
Tesla China Shipping Out Huge Fleets Of Exports
So, Your Tesla Just Lost A Ton Of Value, But That's How Life Works
Electric Cars From China Are Filling European Streets