Tesla may have missed Wall Street's mark, but it's absolutely dominating in the segment.

Tesla missed the mark yet again in Q3 2022, since Wall Street's delivery estimates were higher than the US electric automaker was able to achieve. Fortunately for Tesla, it produced the cars, it just didn't get them all delivered by the final day of the quarter. The company insists there's plenty of demand for its EVs, and that they were in transit to customers at the quarter's end (potentially delivered by now).

Regardless of whether Tesla is able to meet or exceed Wall Street analyst consensus each quarter, its growth story has been one for the history books, and it continues. Tesla has two new factories ramping up production, one in Texas and the other in Germany, it just upgraded its assembly lines at Giga Shanghai, and it appears to be making upgrades in both Fremont and at its original battery Gigafactory in Nevada.

Needless to say, the automaker's production capacity is growing at a rapid pace, and this is ahead of another upcoming factory that's likely to be located in North America. Not to mention Semi deliveries are around the corner, the Cybertruck is coming next year, and a cheaper model is in development. CEO Elon Musk way tell you that Tesla's Optimus humanoid robot will play a big part in the company's future production pursuits as well.

With all of that said, Kelley Blue Book (KBB) published its Q3 2022 vehicle sales figures, which show that Tesla is dominating the EV market. Most people already know that Tesla's sales top all rivals, but perhaps it comes as a surprise that the next best rival sold seven times fewer EVs than Musk and company. 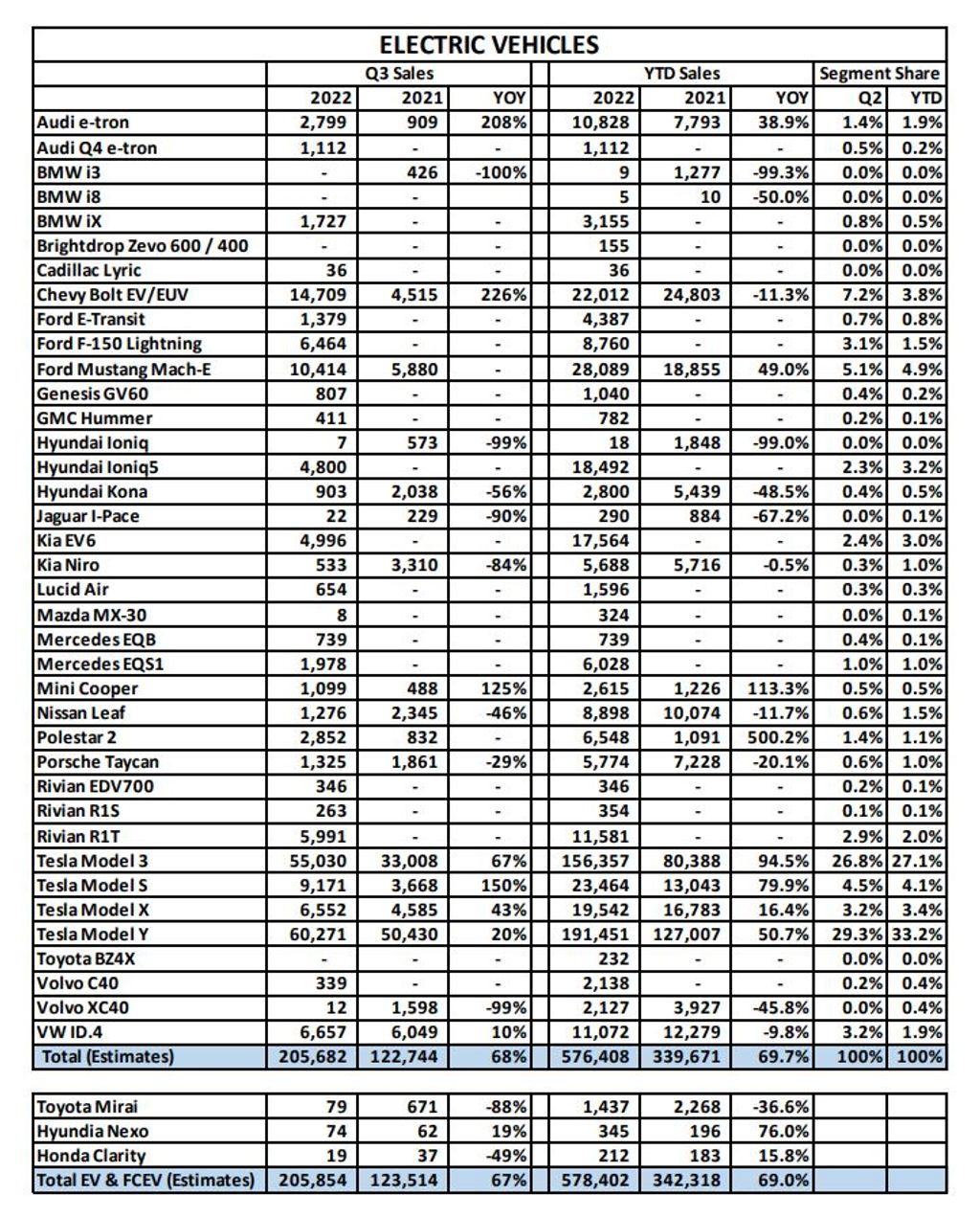 If you just scroll through the above chart quickly, you'll see that the only year-to-date double-digit share percentages (far right column) are for the Tesla Model 3 and Model Y, and they're huge numbers compared to the rest of the chart. In fact, most of the percentages in the column begin with a zero, though there are some notable exceptions.

Remove Tesla from the mix, and the Ford Mustang Mach-E and Chevrolet Bolt EV and EUV are showing impressive sales, along with the Hyundai Ioniq 5, Kia EV6, Volkswagen ID.4 and Rivian R1T. The Audi e-tron and Ford F-150 Lightning also deserve mention here.

Tesla's Model S and Model X don't sell nearly as well as the smaller Model 3 and Y. However, both Tesla flagship models have YTD market share that exceeds almost all other EVs on the market today.