The Insurance Institute for Highway Safety (IIHS) recently posted a video and an accompanying article drawing attention to the Ford Mustang Mach-E electric crossover's performance in the organization's newly updated side crash test.

For those unaware, the IIHS adds new tests and updates other tests on a periodic basis. The new tests are typically more difficult, and they can serve as a sort of trial at first. However, after a time, the IIHS' new test and requirements will eventually help determine whether or not a vehicle is designated as a coveted Top Safety Pick or Top Safety Pick+ award winner. In short, each year it likely becomes more difficult for vehicles to secure the top honors.

With that said, the 2021 and 2022 Ford Mustang Mach-E earned the top rating of Good in the IIHS' updated side crash test. Both the 2021 and 2022 models have the same individual crash-test ratings and the same Top Safety Pick designation. However, the designation only applies to SUVs with specific headlights. 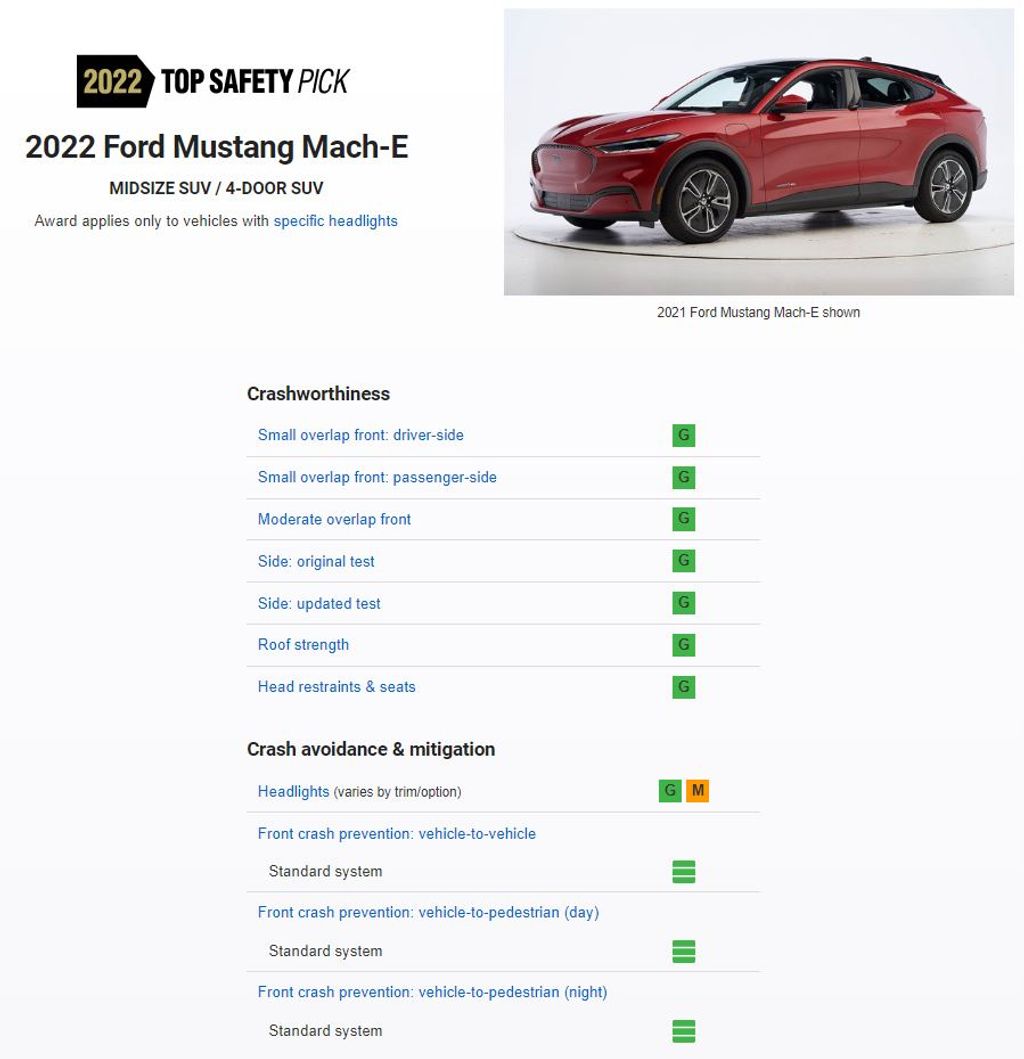 As you can see, the Mach-E earned the top rating of Good in all seven crash tests. Some cars have only undergone six, but there are a total of seven possible tests at this point. The Mach-E also earned a Good and a Marginal rating for its headlights, depending on the trim.

Its front crash prevention systems all got the top rating of Superior. However, this Ford electric crossover missed the highest honor. It's not a Top Safety Pick+ due to the headlight rating on some trims.

As far as the updated side crash test is concerned, the IIHS writes:

"The updated test is similar to the original evaluation but uses a heavier barrier traveling at a higher speed to simulate the striking vehicle. The new barrier weighs 4,200 pounds — close to the weight of today’s midsize SUVs — and strikes the test vehicle at 37 mph, compared with a 3,300-pound barrier traveling at 31 mph in the original evaluation."

The IIHS adds that the Mustang Mach-E earned Good ratings for head protection for the driver and rear passenger. The data from crash-test dummies showed a low risk of injury to most areas of the body. However, the measurement did suggest that the driver's torso could have a slightly elevated injury risk.

The Mach-E's left rear door partially opened during the crash testing, which resulted in a downgrade of the EV's structural performance from Good to Acceptable. Fortunately, the opening door didn't have an impact on the safety of the occupant, but an open door is a red flag since an unbelted person could be more easily ejected from the car.

Thus far, the IIHS has put 18 SUVs through the newly updated side crash test. Ten of those vehicles earned a Good rating.