The EPA says the R1T is more efficient and has more range than the Ford F-150 Lightning.

Edmunds recently tested the Ford F-150 Lightning's range and efficiency compared to that of the Rivian R1T. Aside from the expensive GMC Hummer EV, these are the only two fully electric pickup trucks available on our shores, so they're being compared extensively.

As we've explained time and time again, the EPA's range estimates give us a decent idea of how efficient a car is, as well as how much range it has. However, there are many factors associated with range and efficiency, and it's not wise to rely on a single test for EV range. At InsideEVs, we run our own 70 mph highway range test to give you an idea of what your EV's real-world range might look like. Edmunds also runs its own real-world EV range tests.

In the publication's latest test, it figured out the real-world range of the Ford F-150 Lightning. Edmunds used the range-topping (no pun intended) Platinum model, which has the larger Extended Range battery pack (131 kWh). According to the EPA, this specific model has 300 miles of range, returns 66 MPGe, and uses 51 kWh to travel 100 miles.

For comparison, the EPA says the Rivian R1T – with its 135 kWh "Large" battery pack – has 314 miles of range, gets 70 MPGe, and uses 49 kWh to travel 100 miles. As you can see, very little separates the F-150 Lightning Platinum and Rivian R1T when it comes to range and efficiency. In fact, the EPA estimates that you'll only spend $50 more per year to fuel the Ford over the Rivian, or just $250 during five years of ownership. 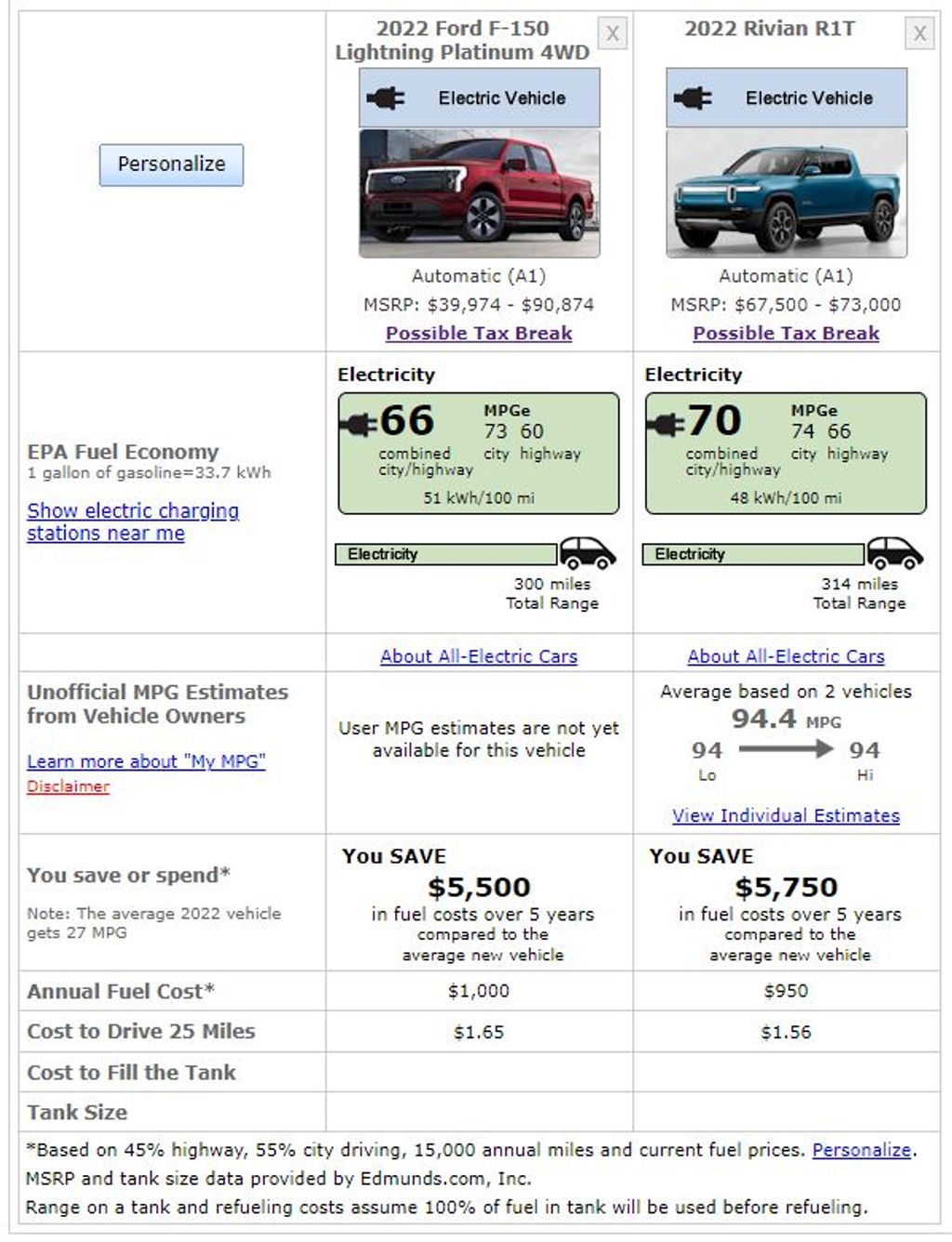 In Edmunds' real-world range test, the F-150 Lightning beat the Rivian R1T Launch Edition in range and efficiency, and it also beat its own EPA rating by more the 10 percent. Interestingly, even though the Lightning is a larger truck than the R1T, the former actually has a smaller battery pack. However, it's important to note that the R1T Launch Edition is about 200 pounds heavier than the F-150 Lightning Platinum.

Despite the EPA's 300-mile range estimate, the F-150 Lightning traveled an impressive 332 miles in Edmunds test. The Rivian R1T Launch Edition made it 323 miles, so we're talking about an extremely marginal win here for the Ford, but a win is a win, and it further proves that we can't simply rely on the EPA's tests.

For many more details about Edmunds' testing, visit the source link below. In the meantime, check out our F-150 Lightning first drive review video below.