The agreements boost Canada's battery ecosystem and prepare the country for investments, according to the Canadian government.

Volkswagen Group and Mercedes-Benz Group have signed Memorandums of Understanding (MoU) with the Canadian government to secure access to the country's reserves of battery materials such as lithium, cobalt, nickel and graphite.

While German automakers are competing for scarce supplies of raw materials with other carmakers shifting to electric vehicles, their motivation for a deal with Canada goes beyond that. It likely has a lot to do with America's recently passed Inflation Reduction Act, which stipulates that EVs eligible for the full $7,500 federal tax credit will need to be made in North America and feature battery materials sourced from North America.

Starting in 2024, at least 40% of the critical minerals in EV batteries must be sourced from North America or other free-trade partners, with the requirement going to 100% by 2029.

The two battery value chain collaboration agreements lack firm commitments from either party, focusing instead on further "exploring" the opportunities in Canada's raw materials and processing sectors. The Canadian minister said the agreements "cement" the interest of German automakers in Canada, boost the battery ecosystem in Canada and prepare the country for investments.

"What you saw today is a completely new chapter even for the automotive industry in Canada because now we have the German automakers. We were not even on their radar screen, now we're centre in their radar, and I think that's going to lead to us partnering with them in a strategic way."

Volkswagen Group said its newly founded battery company PowerCo will play a central role in the automaker's efforts to cooperate with Canada in the fields of battery value creation, raw materials supply chains and cathode material production in the North American region.

For the development of sustainable battery production, PowerCo and the Canadian mining sector will boost cooperation based on recognized ESG (Environment, Social, Governance) criteria. For this purpose PowerCo is planning to establish a new, dedicated liaison office in Canada. A key focus of the cooperation between PowerCo and Canada is the supply of critical raw materials such as lithium, nickel and cobalt.

Volkswagen's press release notes that the automaker sees significant prospects to ramp up cathode material production together with partners and offer Canadian suppliers an opportunity to act as raw material suppliers, refiners and processors. The company reiterated plans to build a dedicated battery cell plant in North America and said it is currently examining locations. 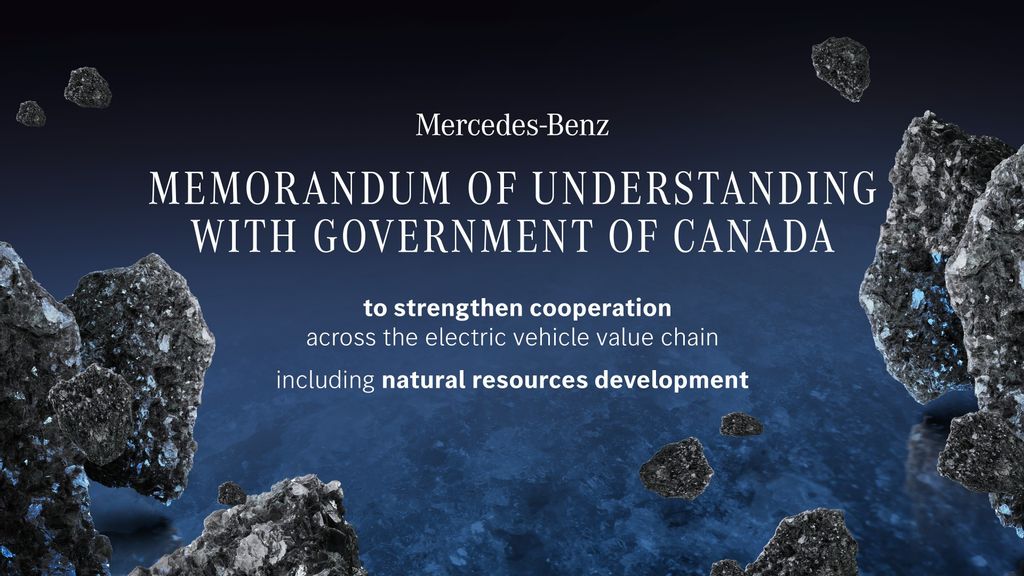 Mercedes to buy 10,000 tonnes of Canada-sourced lithium hydroxide a year from 2026

The MoU also supports dialogue and relationships to facilitate Mercedes-Benz's work with strategic partners in Canada, including with Rock Tech Lithium Inc. for the supply of lithium hydroxide. The German automaker intends to sign an agreement with the Canadian-German company for an annual supply of up to 10,000 tonnes of lithium hydroxide from 2026 onwards.

Rock Tech Lithium, which is developing a mine in Ontario, plans to process the high-quality lithium in Germany, at a new facility in Guben, Brandenburg that will become Europe's first lithium hydroxide converter. Mercedes-Benz's deal with Rock Tech Lithium is expected to advance localization of European production of state-of-the art battery cells.