The CEO says it's more miles than any rival company, and likely more than all competitors' combined miles.

There are plenty of people who seem concerned that Tesla has over 100,000 cars driving on public roads with access to the automaker's Full Self-Driving Beta technology, which can't actually pilot the cars without human intervention. On the flip side, there have been no notable incidents to date, and it appears the technology is generating lodas of data thanks to the incredible amount of miles traveled.

Tesla's CEO Elon Musk insists that the only way to "solve" self-driving technology is to test the features in the real world. Thus far, over 100,000 Tesla owners have driven a combined 35 million miles using Tesla's FSD Beta system. A portion of the automaker's Q2 2022 update reads via Teslarati:

“We have now deployed our FSD Beta with City Streets driving capability to over 100,000 owners. They’re very happy with the capability of the system and we’ll continue to improve it every week. We’ve now driven over 35 million miles with FSD Beta."

Musk shared during the Q2 2022 Tesla earnings conference call that he continues to stand behind Tesla's FSD Beta technology, and he believes it will prove to be the company's biggest advantage over rivals in the market. He went on to confirm the details from the update letter, sharing that Tesla's 35 million FSD Beta miles are more than any other autonomous vehicle company's miles.

Musk went so far as to say that the 35 million miles may be more than all competitors' miles combined. According to Teslarati, Waymo shared in 2021 that its fleet covered 20 million miles of real-world driving since 2009. 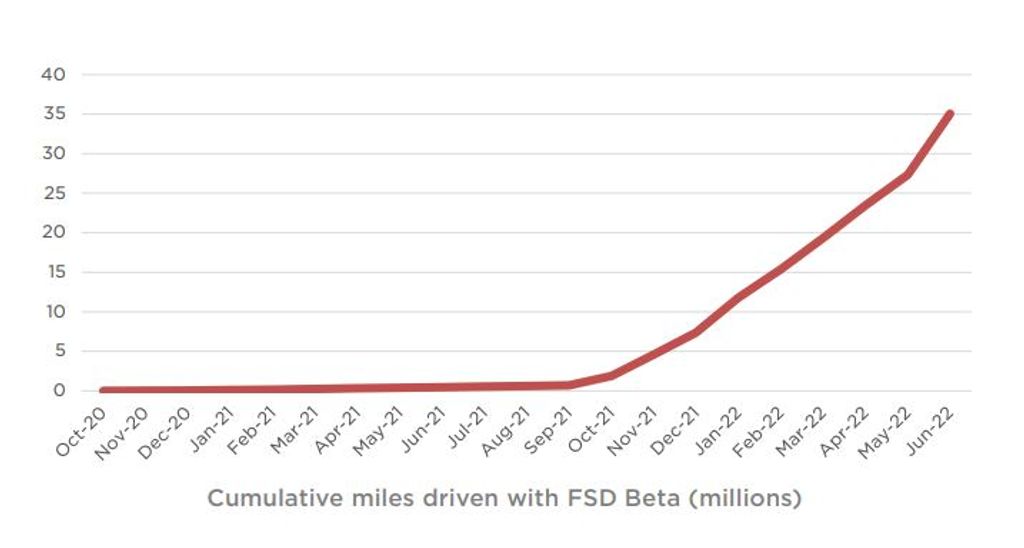 As you can see, the accumulation of miles started very gradually, most likely due to the fact that very few Tesla owners had access to the beta software. However, beginning around September 2021, the miles started on a path to accelerating exponentially.

As Tesla lowers the Safety Score required for access to FSD Beta, the line should continue its trajectory. Eventually, according to Musk, Tesla plans to release FSD Beta to all paying subscribers, which should increase the miles even more rapidly.

Musk reiterated that he is still confident Tesla can solve full self-driving by the end of 2022. He's made this claim in years past, but, as we can clearly see, the program didn't really start to take off until less than a year ago. Musk referenced people's doubts based on his previous claims, but added that it seems Tesla is "converging on full self-driving this year.”