The market is now accelerating towards 1 million plug-ins per year.

After more than a decade, the plug-in electric car market in the US is entering some really noticeable volumes.

The Department of Energy’s (DOE) Vehicle Technologies Office highlights that as of April 2022, the cumulative number of passenger plug-in car sales reached 2.6 million. That's the number since December 2010, when the original Nissan LEAF and Chevrolet Volt entered the market, marking a new chapter for mainstream plug-ins.

Argonne National Laboratory's data indicates that it took nearly eight years to get into the first million, but the second million was achieved in just two and a half more years.

We have no doubt that soon the US market will be at more than 1 million plug-in electric cars per year, and later at more than 100,000 per month (1.2 million per year).

It would be great to achieve such a level by the end of 2022, but maybe we will have to wait until 2023 to see this milestone - a foundation for even faster acceleration towards full electric domination.

It's just a matter of time, considering the currently announced and built EV plants. Manufacturers are busy ramping-up production of basically every single electric model due to high demand. 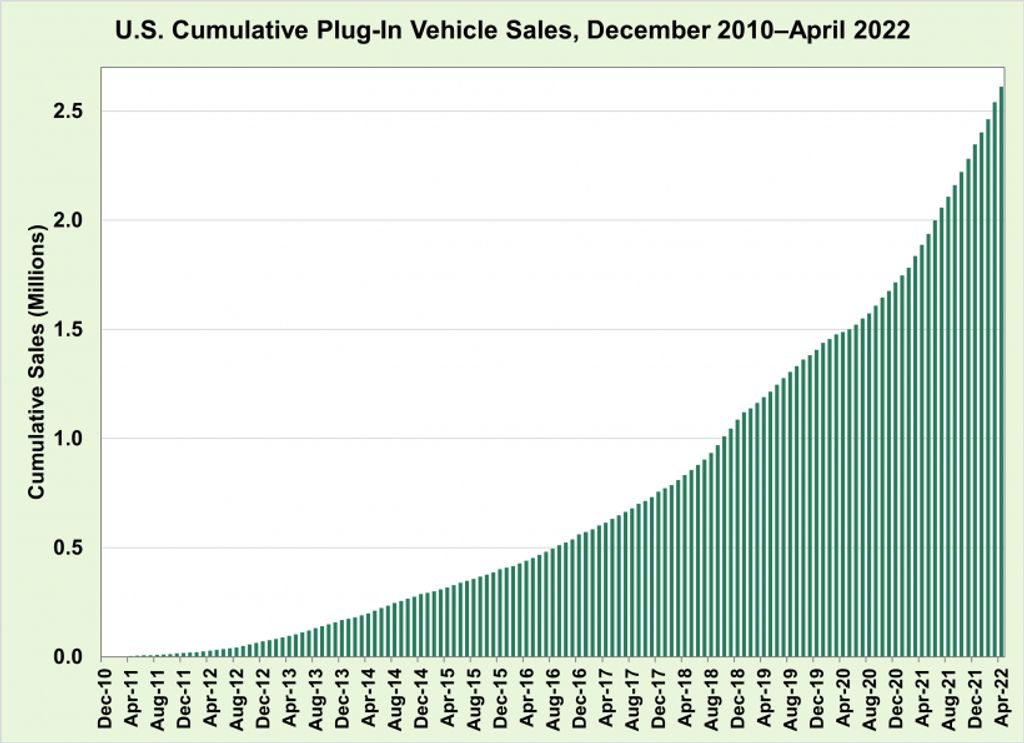 According to a previous report, in 2021, more than one in 10 new passenger cars were rechargeable in California, while in several other states the plug-in share was above 7% (the District of Columbia, Hawaii, Washington, and Oregon).

The sooner the market share will increase nationwide, the faster the conventional internal combustion engine vehicle fleet will be replaced by zero-emission vehicles, powered by locally produced electricity. The complete switch to 100% ZEVs might happen before 2040.

US: Tesla Dominates BEV And Premium Car Sales In January-May 2022
US: Ford Is Also Running Out Of Federal Tax Credits