The electric pickup truck reportedly sold at auction for ~$40,000 over MSRP despite having loose trim on the running boards.

According to a report by the F-150 Lightning Forum, which was shared by our friends at Teslarati, a damaged 2022 Ford F-150 Lightning Lariat recently sold at auction for $110,400. The electric pickup truck reportedly brought in over $40,000 more than its MSRP. Per Ford's online configurator, a new Lightning Lariat starts at $67,474.

Electric cars are catching on, and now with gas prices soaring, it seems even more people are searching for the most fuel-efficient vehicle they can get. This may prove even more true for some truck owners since pickup trucks are pricey to fuel. It comes as no surprise that people are signing up in large numbers to get their hands on an electric pickup truck like the Ford F-150 Lightning.

As we've previously reported, some dealerships are marking up popular EVs, and since the demand is so high and the vehicles aren't readily available (some are even sold out for the model year), people may be willing to pay a premium to get one sooner rather than later. 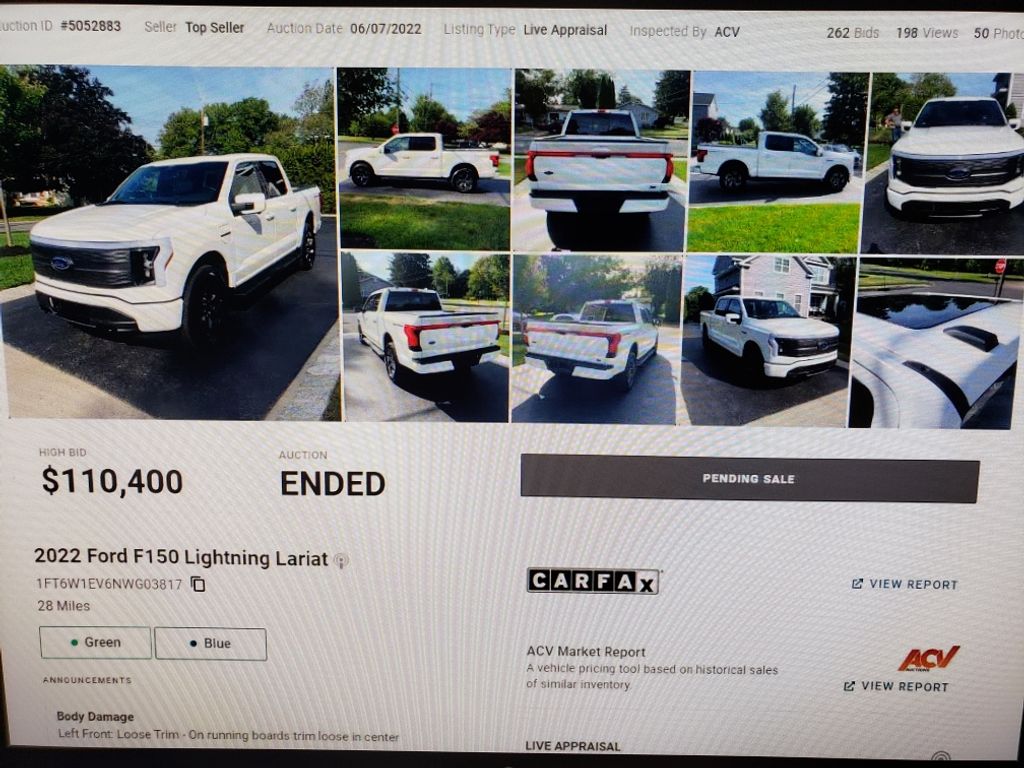 A forum member shared the following screenshot after the auction ended. While there's not a whole lot of information, you can see the truck's trim and VIN. In addition, at the bottom right of the image, it notes "body damage." Apparently, there's loose trim on the truck's running boards.

The Ford electric truck appeared to be in high demand at the ACV Auction, with 262 bids and a final selling price of $110,400. However, it does note that the sale is still pending. Moreover, if this is all the real deal, and it's difficult to prove with 100-percent certainty, we'd imagine there are many buyers who'd be willing to grab the Lightning if the above sale doesn't go through.

The F-150 Lightning is exceptionally well-priced for an electric pickup truck, starting at around $40,000. There's not a whole lot of competition just yet, and rivals like the Rivian R1T and GMC Hummer EV are quite expensive.

It won't come as any surprise to us if these electric pickups continue to sell at prices above MSRP. Keep in mind that due to the nature of the current market, many EV owners have been able to sell their used electric cars for a profit, even after owning them and driving them for a year or more.

As always, head down to our popular comment section and let us know what you think of this story. If you have access to any other details related to the auction, feel free to share it as well.