In more positive news, Tesla's average transaction price hasn't risen nearly as much as many rivals' year over year.

A new report published by Kelley Blue Book and shared by Teslarati dives into automakers' average transaction prices as of February 2022. KBB notes that, as a whole, new vehicle prices dropped again in February, though they're still about $5,000 higher than they were in February 2021.

Tesla's average transaction price spiked more than any other automaker in February due in part to a few recent price increases, but they're not up as high as other brands on a year-over-year basis. It's also important to note that Tesla's average transaction prices likely rose recently since shoppers can take delivery of expensive models more quickly than waiting for the cheaper options.

Meanwhile, KBB adds that when it comes to non-Tesla vehicles, consumers paid significantly more than MSRP for the ninth straight month in a row. In addition, incentives are going away, which also pushes the average transaction price higher. Tesla doesn't rely on MSRP or incentives, though it adjusts prices often.

This all comes as no surprise due to a number of factors, including the chip shortage, supply constraints in general, and the numerous negative impacts of the Russian invasion of Ukraine. Cox Automotive's Michelle Krebs shared:

“Consumers are paying near top dollar for new vehicles as prices remain high and incentives fall to a record low. With prices for oil and gas, along with commodities like metals used to build vehicles, soaring due to Russia’s invasion of Ukraine, automakers may be compelled to try to offset their increasing costs by raising vehicle prices. The Ukraine situation is causing additional disruption to the automotive supply chain which makes the likelihood of growing inventory, which remains stuck at low levels, less of a sure thing.”

Tesla CEO Elon Musk recently took to Twitter to share that both Tesla and SpaceX are dealing with "significant recent inflation pressure in raw materials & logistics." He also replied to add, "And we are not alone," along with a link to a related article.

There's a lot to unpack in the article and the series of charts shared by KBB, but the bottom line is pretty clear. New vehicle prices are in turmoil, and we should arguably expect this to continue going forward. KBB shared the information in two closely related charts, which we've included below: 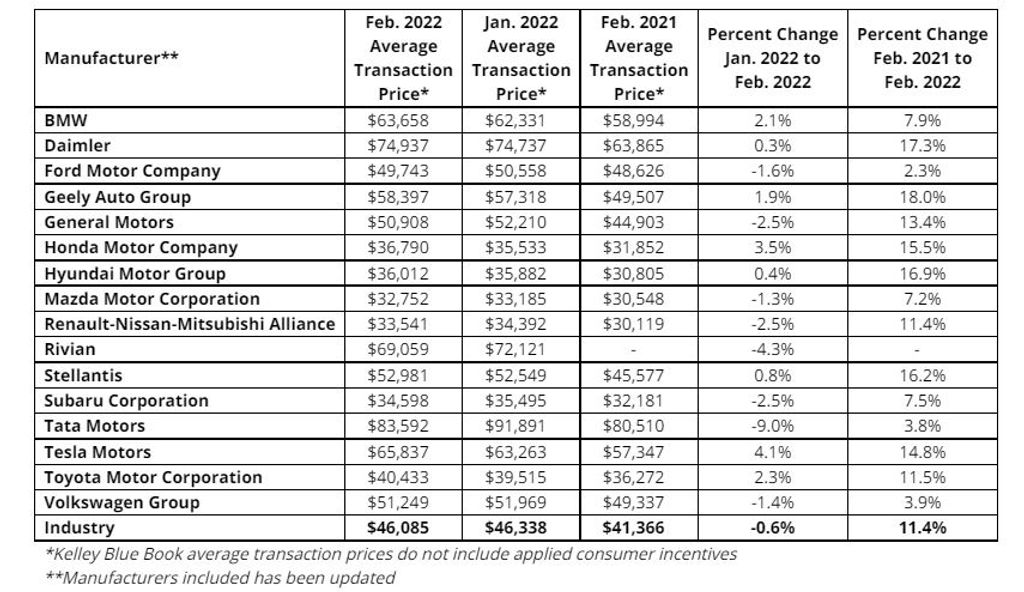 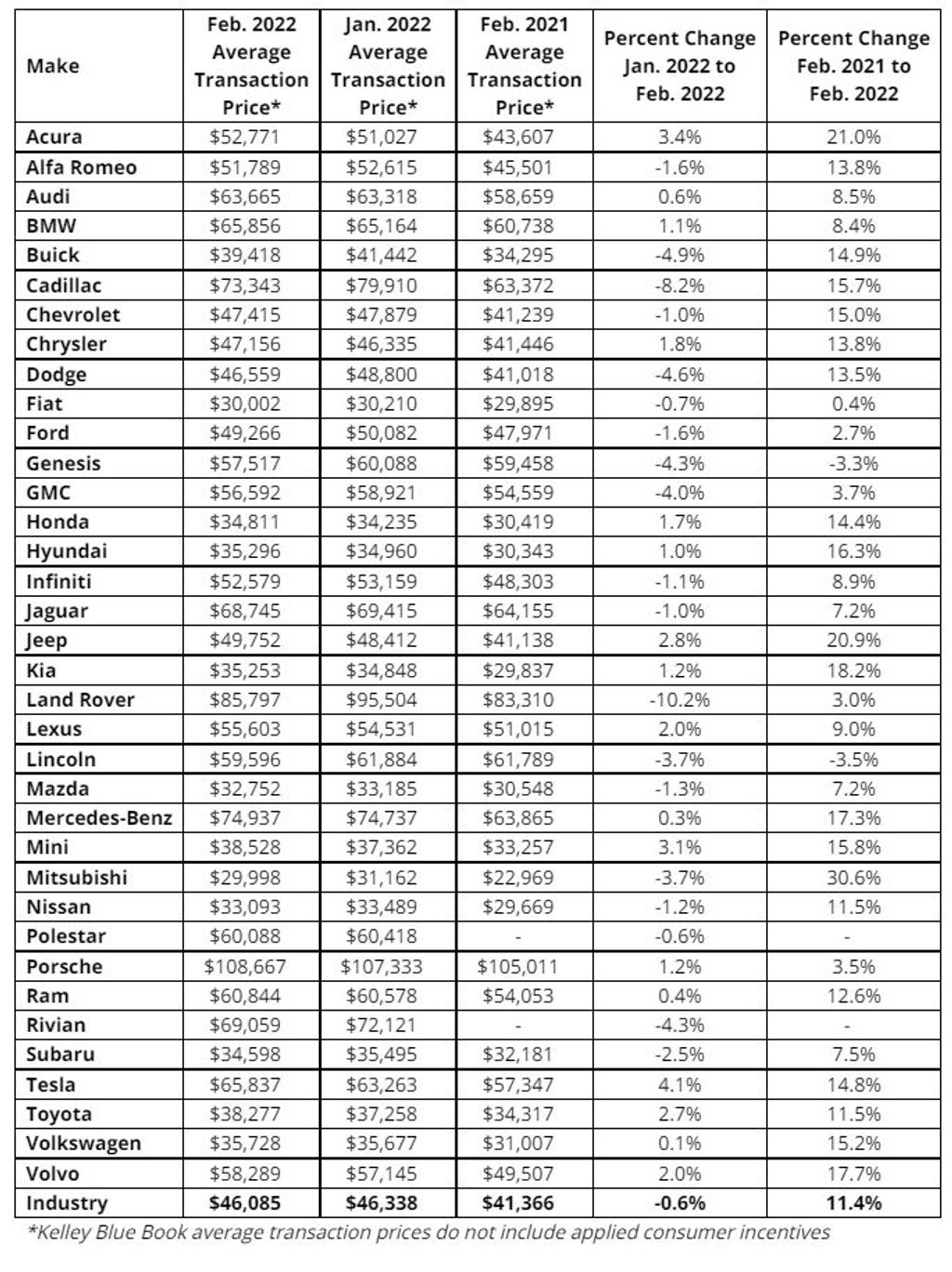 As you can clearly see, Tesla's average transaction price increased by 4.1 percent from January 2022 to February 2022. During the same timeframe, many automakers saw a drop, and the industry as a whole saw a decrease of 0.6 percent.

That said, there are certainly other brands that also had a notable increase, such as Acura, Jeep, Mini, and Toyota. At any rate, Tesla's average transaction price rose from $63,263 in January to $65,837 in February.

If we look at the bigger picture, from February 2021 to February 2022, Tesla's average transaction price soared by 14.8 percent. However, the industry average increase year over year is at 11.4 percent.

Moreover, several other brands have also seen massive average transaction spikes that exceed Tesla's. For example, Mitsubishi's increase is over 30 percent, Acura and Jeep are at a 21 percent increase, and many brands are up over 15 percent.

US: Tesla Substantially Increased Prices For All Models
Here's How Much Tesla Cars Cost And How Long You Will Wait For Delivery

2020-2022 Chevrolet Bolt EV/EUV Buyers To Get Retroactive Discounts
Tesla Versus Electrify America: Which Is Faster?
Study Predicts Both Ford And GM Will Overtake Tesla By 2025
Stellantis Exec: The Car Market Might Collapse If EVs Don't Get Cheaper
Ford F-150 Lightning Vs Gas Truck Towing Range: Same Load, One Fill-Up