The analysis reveals competitive results, but the peak power output above 200 kW is a bottleneck.

The Mercedes-Benz EQS is one of the latest electric cars on the market and today we will take a look at a real-world fast-charging test of the EQS 450+ version (rear-wheel drive).

The test was performed by our colleague Kyle Conner, for the Out of Spec Reviews channel, at an EVgo fast-charging station in Denver, Colorado. The charger was rated at 350 kW, but more importantly, was able to provide up to 500 A, which is important to reach high power at about 400 V.

In the second part of the article, we will try to compare the results with some of the other high-end models, like the Lucid Air and Tesla Model S.

According to the data obtained from the 0-100% SOC test in the video (charger's display), charging power quickly increased to around 200 kW and remained near this level up to about one-third of the battery capacity.

The overall shape, as well as the power level, is very similar to the charging curve shared by the manufacturer in Summer 2021.

The total energy delivered to the car (according to the EVgo charger) was 116 kWh.

The charging session from 0-100% took 1 hour and 17 minutes (aside from an interruption due to the 60-minute session limit), but the more important values are: 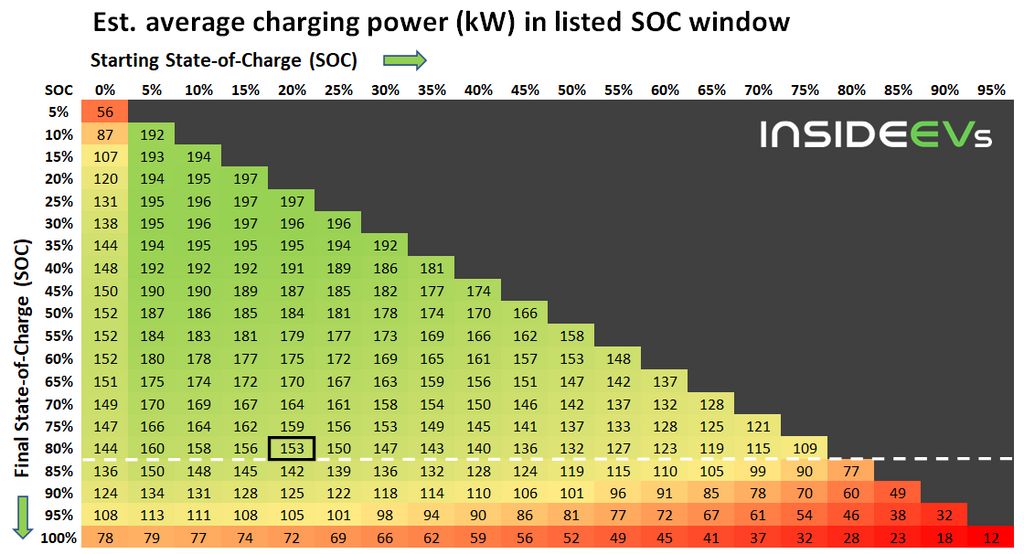 The Mercedes-Benz EQS 450+ is equipped with a 107.8 kWh battery (usable capacity). The manufacturer does not communicate the total battery capacity.

Kyle Conner guesses that the total battery capacity might be about 112 kWh, while we previously guessed 115 kWh.

The rate of range replenishing is pretty good, even for the EPA test cycle, but not as high as in the case of some other EVs.

Here is our ultimate charging card for the Mercedes-Benz EQS 450+, which shows an estimated time of charging to add a certain number of SOC percent points, average charging power, added energy and added range for listed SOC ranges. 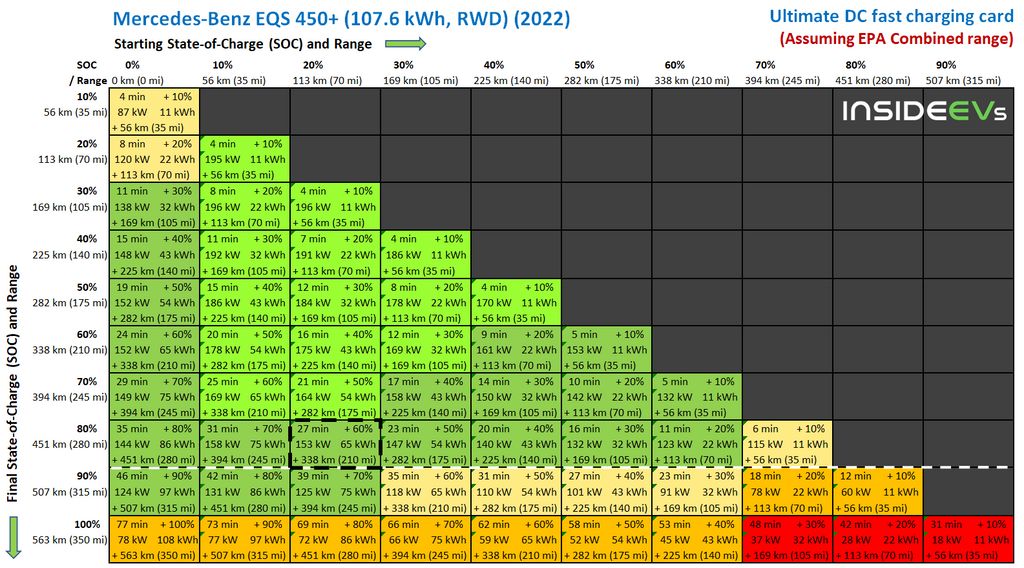 Now it's time to compare the Mercedes-Benz EQS 450+ with the Lucid Air and Tesla Model S Plaid tests (both analyzed here):

If we compare the Mercedes-Benz EQS 450+ with the Lucid Air Dream Edition and Tesla Model S Plaid, we will notice that there is a big difference in the power level in the first half. After 50% SOC, the three curves are more similar to each other. 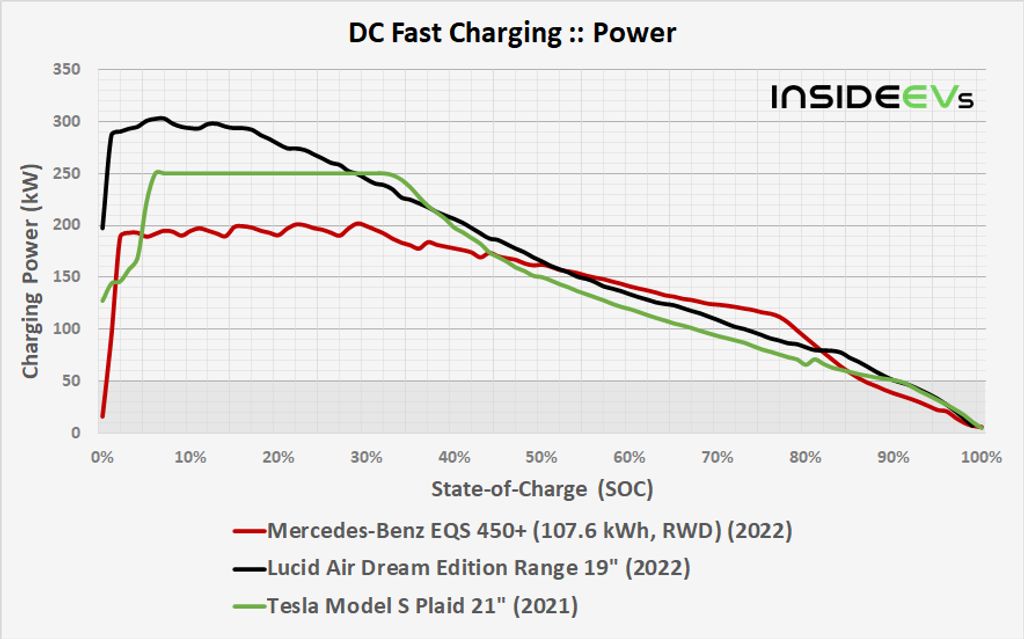 One might think that the EQS charges much slower due to the difference in the first part. However, if we take a look at the average from 20 to 80% SOC, the EQS is basically on par with the Lucid Air and slightly above the Tesla Model S.

That's a surprise, which would not be discovered without such detailed analysis.

Another finding is that the charging time from 20 to 80% SOC is 27 minutes, not far behind the Tesla Model S, and 4 minutes faster than the Lucid Air.

It's not intuitive because of the difference in the battery capacity - Lucid charges at higher power but has also more energy to recharge. 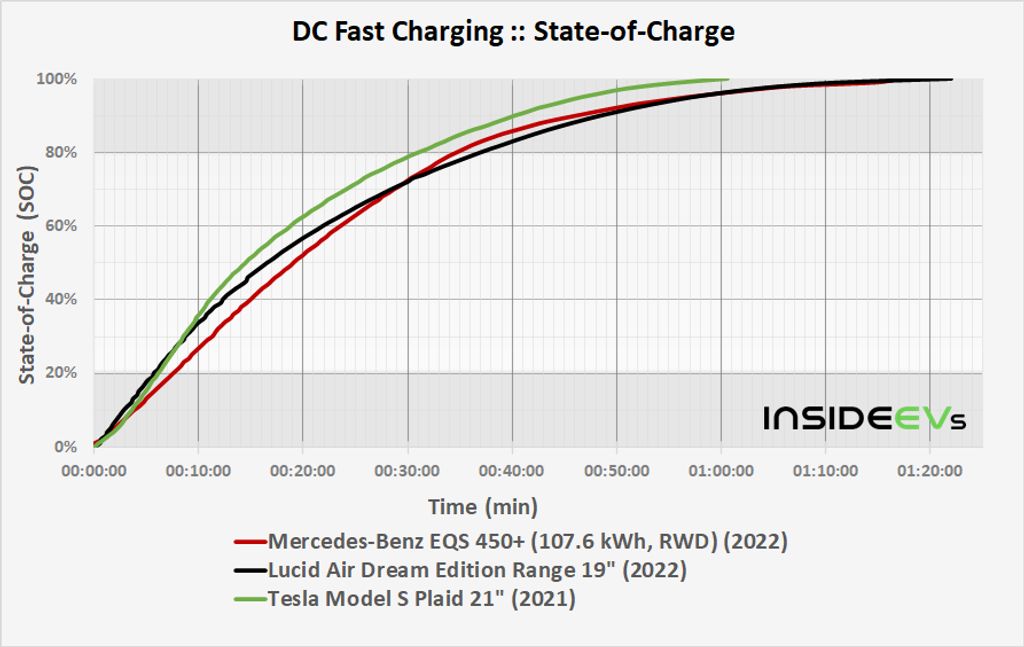 In the 10-80% SOC window, the Tesla Model S needs 27.5 minutes, while the Lucid Air is over 34 minutes. The Mercedes-Benz EQS was in the middle between them at 31 minutes.

The C-rate comparison confirms to us that Mercedes-Benz played it safe in the first part of the charging curve, not stressing the battery with a high charging rate.

Interestingly, it's a little bit above the other two models between 55% SOC to over 80% SOC. The average between 20 and 80% SOC is very similar for all three. 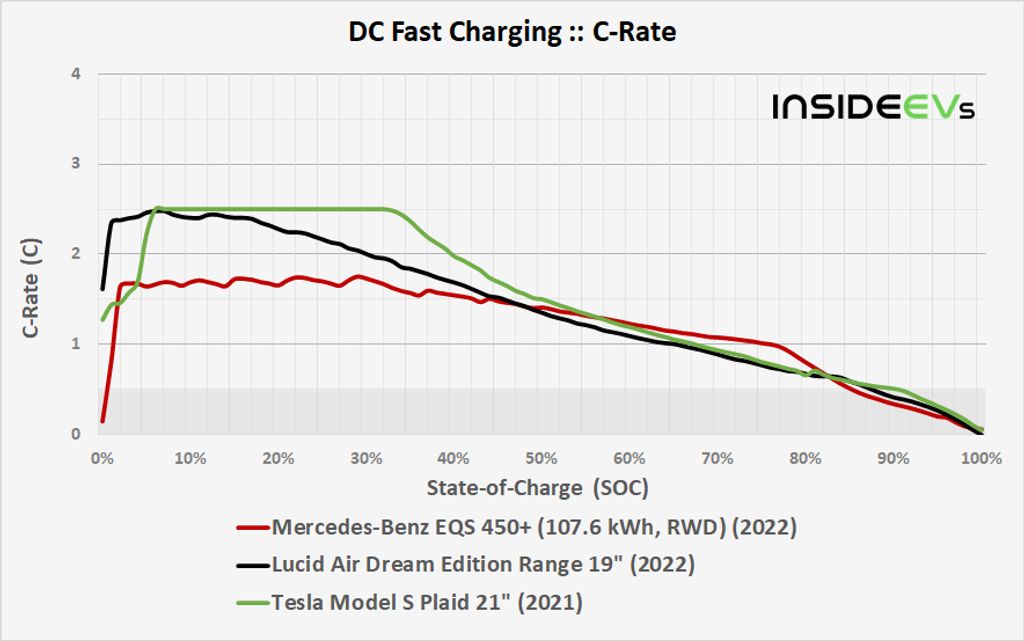 Here are the C-Rate numbers, but remember, that we don't know the official battery capacity of the Tesla Model S and EQS. It's just a raw estimate.

Now, the most important metric from a consumer perspective - the range replenishing rate of the Mercedes-Benz EQS. We will use the EPA Combined range as a base (the only available common rating of the three models).

EPA range varies depending on wheel size, so we picked a few versions:

The chart reveals that the EQS is the slowest of the four: 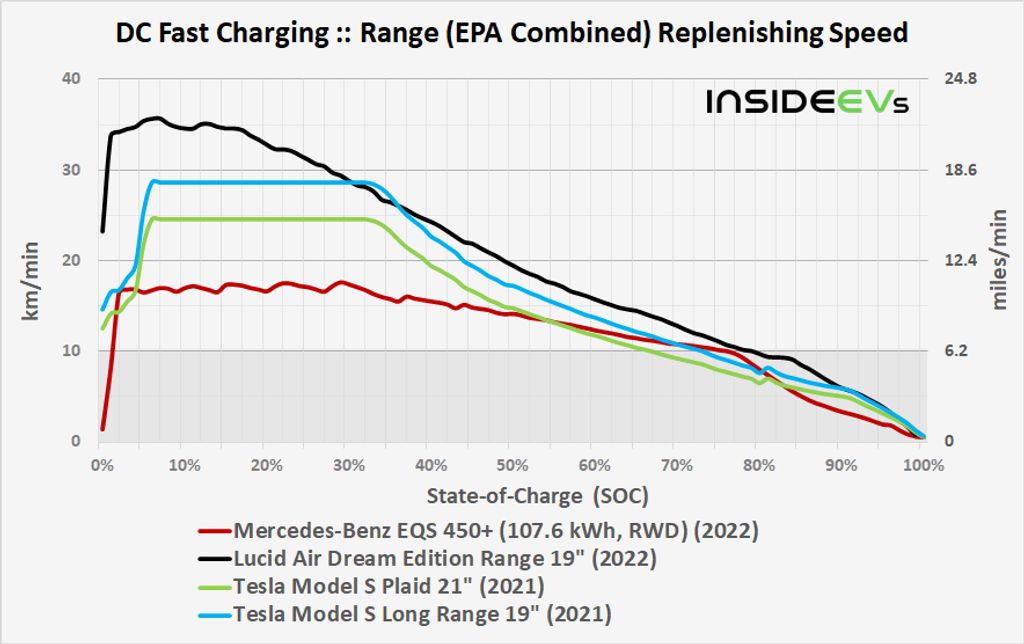 The EQS's average in 20-80% SOC window is 13.3 km/min (8.3 mi/min). That's slightly less than in the case of the performance-oriented Tesla Model S Plaid, which has almost the same EPA range (348 miles) and bigger wheels.

One might ask why because the average charging power is almost as high as Lucid Air. Well, the range/efficiency in the EPA test cycle plays a role here. A comparison of the WLTP test cycle probably would be more favorable for the EQS.

The DC fast charging test of the Mercedes-Benz EQS confirms that it's one of the fastest charging electric cars on the market, but not as fast as the Lucid Air or Tesla Model S. The difference in range replenishing speed compared to Lucid Air is substantial.

The peak charging power of just above 200 kW is a weak point - it could be higher to improve the results.

The 400-volt battery architecture is another thing - the switch to an 800 V battery system (like in the Lucid Air or Porsche Taycan) might be a good idea.