Context: Dan O'Dowd, the man who placed the ad, is the CEO of Green Hills Software, a supplier company for the 2022 BMW iX.

The Dawn Project, an organization self-described as “dedicated to making computers truly safe for humanity,” has attacked Tesla Full Self-Driving technology in a full-page ad in the New York Times on Sunday, January 16, 2022.

Founded by 1976 CalTech graduate Dan O’Dowd, who describes himself on the organization’s website as “the world’s leading expert in creating software that never fails and can’t be hacked,” The Dawn Project sees computers as a “grave threat to humanity since they have been hooked up to the internet together with every safety critical device.”

Titled “Don’t be a Tesla crash test dummy,” the NYT ad is a harsh critique of the Full Self-Driving “robot car experiment.” Here’s the full advertisement below. 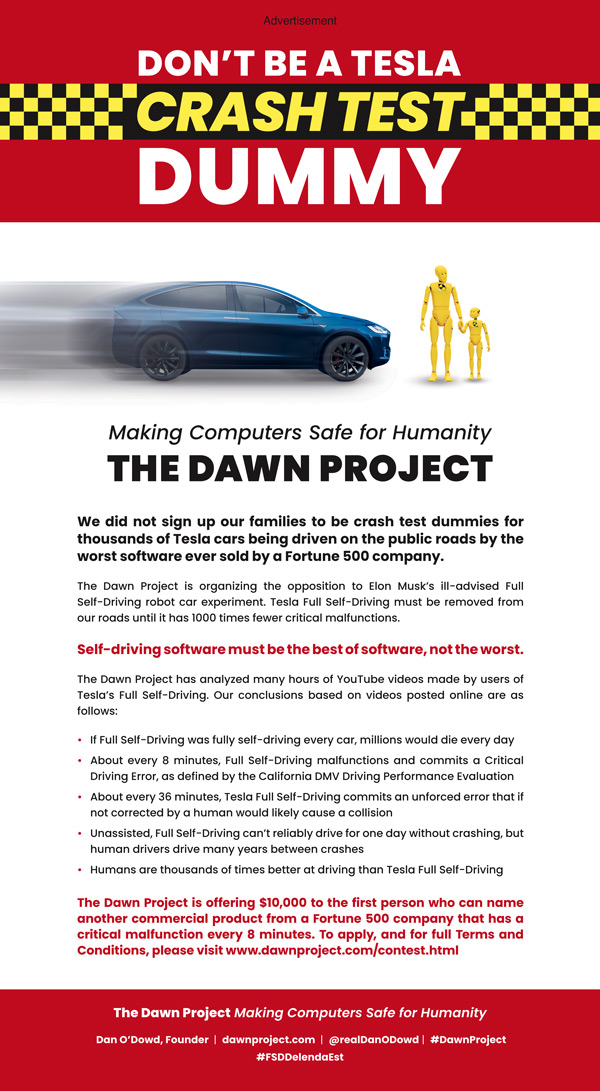 Dan O’Dowd announced the full-page NYT advertisement on Twitter as part of a campaign to ban Tesla Full Self-Driving. What he conveniently forgot to mention is that his company, Green Hills Software, is a supplier for the all-electric 2022 BMW iX, a Tesla Model X rival.

This piece of information alone is enough to discredit The Dawn Project's claims in the paid NYT ad, but there are more reasons why this undertaking is difficult to take seriously. For example, cherry picking FSD Beta YouTube videos to suit a desired narrative does not sound too scientific or unbiased, does it?

In addition, using third-party YouTube videos—instead of directly testing the technology—to extract "evidence" that FSD would kill millions every day if it were fitted to all the cars in the world is ridiculous. Another red flag is the fact that the ad not once uses the software's full name Full Self-Driving Beta. It leaves the Beta part out, which may lead some readers to believe FSD Beta is a finished product when in fact it is still undergoing development testing.

Tesla’s only reaction so far to this strange attack came from Elon Musk, who called O’Dowd’s Green Hills software “a pile of trash,” implying that Linux, which Tesla uses in a customized form on its cars, is way better.