Rich Rebuilds’ V8-swapped Model S may have received a lot of attention, but it’s not the only one of its kind.

Putting an internal-combustion engine in a Tesla has to be one of the strangest and most pointless things anyone could do, yet it seems to be a gag that is gaining popularity. After the now quite famous V8-swapped Tesla Model S created by Rich Rebuilds and his team, someone created another.

In fact, it was Rich himself that mentioned this project in the most recent video uploaded on his channel, the one where he shows off the V8 Model S in its (almost) finished form. However, even though both are ICE-swapped Teslas and both were created as gags, that’s pretty much where the similarities end.

As its name suggests, the Vlog Creations YouTube channel is not an automotive outlet. In fact, they mostly just do pranks and try to have fun, which is pretty much what happens in the video in which they take an ICE-converted Model S in for an oil change.

This is obviously done to troll the workers at the garage for the pleasure of the channel’s YouTube audience and as a means to poke fun, this old smoke-spewing Model S gets the job done. The video’s host adopts a dumb guy persona and pretends like he doesn’t know Teslas are electric, although he does say he thought they would be quieter before he bought this very one off a marketplace called Gregslist.

Rich points out in his video that these guys only made this ICE Model S as a joke and they spent nowhere near as much time as he did with the conversion. He doesn’t say what the donor car’s history is or why it was chosen for this project.

Judging by how high it rides, it probably no longer has the battery pack, so there is a chance they did not start with a running vehicle. They also link to a video that shows part of the ICE conversion process, we linked that below. In the main video, the part about the Tesla oil change starts at the 3-minute mark. 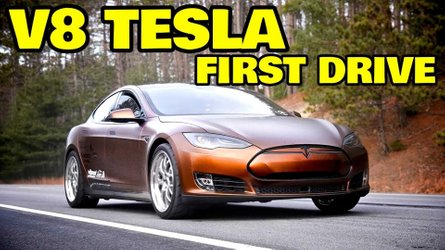 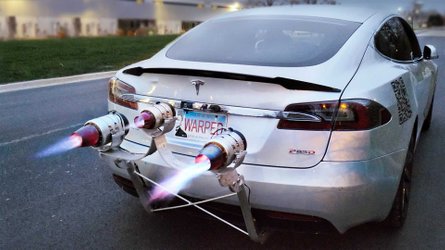 How Much Quicker Is A Tesla With Three Jet Engines Strapped To It?