CR: EVs Worst For Reliability But Not Due To Their Powertrains

In general, electric vehicles tend to be more reliable than traditionally powered cars as well as hybrids and PHEVs. Quite simply, there is less that can go wrong with EVs as they have fewer moving parts. However, Consumer Reports latest reliability rankings suggest electric cars are becoming more complex and therefore vulnerable to reliability issues.

The problems seem to stem from the increased amount of tech included in new EVs rather than actual powertrain issues. Analysts noted luxury EVs tend to be more unreliable as they have more complex infotainment and general technology features. Cheaper EVs using more dated, simplistic tech such as the Nissan Leaf perform much better per the report.

Tesla finished second last, ahead of only Lincoln, in brand reliability rankings. Consumer Reports stated the Model Y has “much worse than average” reliability and that the Model 3 also has a lot of problems, although they found Chinese-built Teslas were substantially better made than their Fremont counterparts.

Overall the main positive is that fundamentally electric cars are proving to be as reliable as ever, it’s just the technology put into more high-end models that’s causing problems. It will be of particular interest to see how Mercedes’ Hyperscreen will hold up in terms of reliability. Arguably the epitome of “crazy, industry-first technology” the Hyperscreen will debut on the Mercedes EQS and will also be available as an optional extra on the smaller EQE. Interestingly, Mercedes has no plans to offer the 56” screen on any of their non-EVs – further validating Consumer Reports’ analysis that electric cars typically feature the latest and greatest in terms of technology which in turn can lead to reliability issues.

Lexus, Mazda and Toyota were the most reliable brands. All three offer numerous hybrids and have a strong resistance to BEVs. They also all wish to maintain the development of the internal combustion engine for as long as possible. In fact, Toyota and sub-brand Lexus intend to work with Mazda and several other Japanese brands on the development of “greener fueling options” and hydrogen tech. Consumer Reports had plenty of praise for all three, and noted previously that hybrids and PHEVs cost less to run than gasoline vehicles and (after 100,000 miles) even EVs.

More On EVs And Reliability 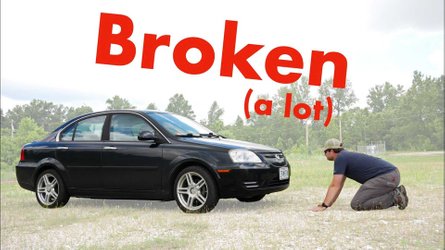