It turns out, there was a person buckled into the driver and passenger's seats, and the driver pressed the accelerator.

It's hard to forget about the terrible and extremely sad Tesla crash that occurred not so long ago in a Spring, Texas neighborhood. As soon as reports related to the accident began to surface, they were rampant with speculation. Now, new event recorder data sheds light on some key details.

That said, it's very important for us to stress that the investigation is far from over, and speculating all over again about the missing details will only work to cause more confusion.

Is Tesla off the hook thanks to the new data? Not necessarily. Does the data verify with 100-percent certainty whether or not Autopilot or any other advanced driver-assist systems were active? The investigation is still looking into the potential Autopilot angle. Does the new data explain why the driver and passenger were found in the back seat and didn't exit the burning car? No.

As you can see, despite the headlines you may have seen, there's still much to learn about the accident. However, what we do know is that the driver and passenger had been drinking. There was, in fact, a person "at the wheel" of the car, contrary to all the early reports that "no one was in the driver's seat." In fact, both the driver and passenger were strapped in up front. The driver was applying the accelerator pedal at nearly 100-percent prior to the crash, and the speed during this time was as high as 67 mph.

For those unaware of the important details of the crash, a Model S driver pulled out of his driveway with a passenger in the car. This was proven by cameras at the home, as well as details provided by family members at the home. Moments later, and only a very short distance from the house, the Model S missed a turn, slammed into a tree, and caught fire. Both occupants died in the crash, and they were found unbuckled. One person was found in the second row.

Based on the most recent update from the National Transportation Safety Board (NTSB), the Model S' Event Data Recorder (EDR) reveals that the driver was pressing the accelerator pedal. The NTSB shared via Electrek:

"With the assistance of the EDR module manufacturer, the NTSB Recorders Laboratory repaired and downloaded the fire-damaged EDR. Data from the module indicate that both the driver and the passenger seats were occupied, and that the seat belts were buckled when the EDR recorded the crash. The data also indicate that the driver was applying the accelerator in the time leading up to the crash; application of the accelerator pedal was found to be as high as 98.8%. The highest speed recorded by the EDR in the 5 seconds leading up to the crash was 67 mph."

We'll be keeping a close eye on the investigation so that we can share more details as they become available. 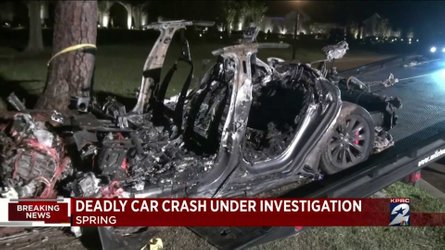 Tesla Says Texas Crash Likely Had Someone In The Driver's Seat
⠀ 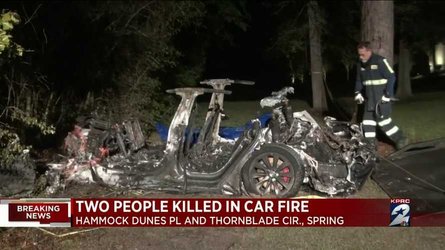 NHTSA Will Investigate Fatal Tesla Crash With No Driver In Texas
By: Steven Loveday
++
Got a tip for us? Email: tips@insideevs.com