Tesla pulled off its record quarter despite mounting obstacles, and it did it with only two factories.

Posted on EVANNEX on October 05, 2021 by Charles Morris

Earlier this month, Elon Musk warned employees that this would be “the craziest month of deliveries Tesla will ever have.” I don’t know how wild it got at the delivery centers, and I don’t want to know, but the end result is hard to argue with—Tesla set a new quarterly record for vehicle deliveries.

Tesla’s direct-to-customer sales model necessarily results in a gonzo delivery push at the end of every quarter, and as predicted, this one reached a new level of insanity, in spite of a spate of global supply chain and logistics problems.

In the third quarter, Tesla produced 237,823 vehicles and delivered 241,300, smashing last quarter’s record of 201,250 deliveries. A poll of Wall Street analysts found that the average Tesla-watcher was expecting around 222,700.

Models 3 and Y have taken over the lion’s share of Tesla’s volume—the two newer models accounted for 232,025 deliveries, and the venerable Models S and X accounted for a mere 9,275. This actually reflects a significant ramp-up of Model S production, which slowed to a trickle last quarter as Tesla began production of the updated version. Model X has also had a revamp, and few units were delivered this quarter, but it’s expected to get back into the mix during the next period.

Meanwhile, the new Gigafactories in Texas and Berlin are expected to start producing Model Y by the end of 2021, so most observers expect Tesla to achieve annual production of over a million electric vehicles this year. 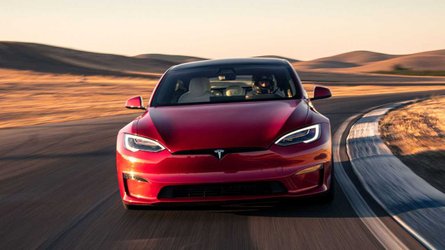 Wall Street liked the news well enough—TSLA notched a slight gain the day following the announcement (these days, only ludicrously plaid numbers cause the stock to make a real move), and Bloomberg (via Electrek) reports that short interest is at an all-time low, at 1.1% the shares outstanding.