Verizon is first customer for the new van.

The BrightDrop EV600 could never challenge a GMC Hummer EV, which is capable of a 3-second 0-to-60, to a drag race. Yet, it is much quicker in another key way. The van was developed by the new General Motors company focused on electric light commercial vehicles in a matter of a mere 20 months.

That's fast! The typical vehicle development time, it says, is 50 months. Still expected to begin low-volume production by the end of this year, the outfit boasted about sticking to its timeline despite the pandemic, chip shortages, and other challenges, while also announcing the addition of a new model to the BrightDrop brand.

Dubbed the EV410, it will have over 400 square feet of cargo space, this new van has all the capability and the same safety features of the original vehicle, but in a smaller, mid-size footprint. With a wheelbase over 150 inches (12.5 ft) within a package just under 20 feet in length, it keeps the impressive 250 mile plus range of the EV600, but allows it to be more urban center-friendly. As a reminder, the EV600 is 24 feet long.

The EV410 can give some credit for its speedy development to the Ultium team. That's the suite of batteries and components going into this coming generation of the General's electric vehicles, starting with the Hummer EV and followed by the Cadillac Lyriq.

More on BrightDrop and its vehicles 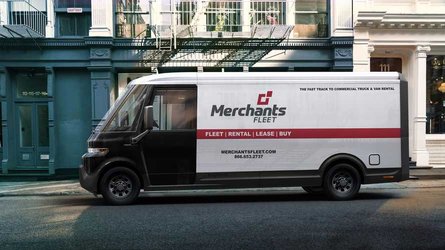 BrightDrop is keeping its cards close to its chest when discussing prices, order size, or expected production volumes. Though Verizon has been named as the first customer for the EV410 – it will be added to its field maintenance and service fleet – the number of vehicles it's shelling out for is unknown. It is expected to enter serial production in 2023.

As we mentioned, the OG Brightdrop, the EV600, is expected to begin deliveries before the end of this year, with vehicles coming from a low-volume line at a Detroit supplier. That tooling will be moved to the CAMI Assembly Plant in Ingersoll, Canada next year, where volume production in the two million square-foot building is expected to begin in November of 2022.

If you'd like a quick refresher on the EV600, check out this video below put together by our friends a Roadshow a few days ago.