Let's see if an all-electric Tesla powertrain has what it takes to outperform a diesel.

What a concept? Kudos to carwow for its latest video on YouTube. The publication takes a new diesel-powered Land Rover Defender and pits it against an older Land Rover Defender that's powered by a Tesla electric motor and battery pack. What's the best way to see if diesel or electric power prevails? An epic tug-of-war battle, of course.

Diesels have long been a top choice for towing, as well as heavy-duty trucks that regularly undergo loads of abuse. However, times are changing, and we're not yet talking about fully electric trucks or highly capable large SUVs, since there are none on the market, though they're all coming soon.

In many cases today, the diesel engine option in various vehicles isn't the powertrain with the highest towing capacity. This isn't to say it doesn't offer gobs of low-end torque and the ability to take years of abuse, but high-tech turbocharged engines and hybrid systems have proven they can tow more.

Since there's no all-electric pickup truck or super capable electric SUV available today, carwow used an old Land Rover Defender that's been modified. The nice part here is the publication gets to pit two very similar vehicles from the same automaker against one another. The only major differences are the age of these vehicles, as well as their powertrains.

While we don't want to give away all the details here, we will see that there's a bit of a twist. As you'll see, in the first test, the Tesla-powered Land Rover can't get enough grip, likely due to its tires, as well as the fact that it's more of a pickup truck design with little weight at the rear.

No worries, however, carwow has a second Tesla-powered Land Rover that's bigger, heavier, and wearing the right rubber for the job. To say it makes the diesel Defender look weak would be an understatement.

Check Out These Related Tug-Of-War Battles: 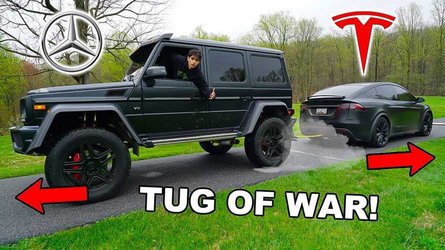 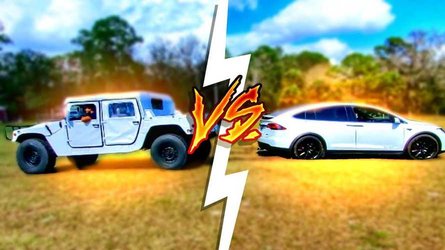 Check out the short video to see these tug-of-war battles for yourself. Then, take a minute to share your thoughts in our comment section below.