It may look like a mildly futuristic Audi sedan, but that's not its main point of focus.

Audi Grandsphere is a brand new concept that shows the way forward for the brand’s sedans of the near future. It isn’t a particularly striking or unusual design for an Audi (it's not too dissimilar to the A6 E-Tron concept), but behind the seemingly simple details lies a lot of thought and complexity, and most of that is focused around the idea that this isn’t just an electric sedan, but it’s also one that can drive itself - it’s envisioned as a Level 4-capable autonomous car.

The study’s highlights are its elegant exterior design, that frankly looks like what you would expect a near-future luxury fastback to look like, the distinctly Audi-esque interior that looks minimalist but actually has a lot going on and the electric powertrain that motivates it. Regarding the exterior, it’s safe to say it doesn’t really polarize opinions - it is quite a traditional looking vehicle, and Audi even opted to retain the outline of a grille in the front, even though it is not needed any more.

It’s also quite a long vehicle, measuring 5.35 meters (17.6 feet) from nose to tail and Audi says it needed a vehicle this size in order to make the interior feel spacious and luxurious and provide an experience similar to first-class air travel. It’s a 2+2, so nobody gets to sit in the middle seat in the rear, even though there appears to be a full-width bench seat in the back.

But while the exterior will be instantly recognizable as an Audi and feel familiar, the Grandsphere’s interior looks nothing like the manufacturer’s current production vehicles. It has a wrap-around cockpit design that integrates infotainment into the wood trim on the dash, and the steering wheel, gauge cluster and essential controls are all concentrated in and around a pod that stows away when the vehicle is in autonomous mode.

We know manufacturers are planning to make the steering wheel go away when an autonomous car drives itself, but this is one of the most elegant proposals for how such a system might work in a production car. With that being said, the Grandsphere’s interior is far from production-ready, but at the same time it isn’t a million miles away either.

The study is built on Audi’s new PPE platform and it has a battery with about 120 kWh capacity that grants it a claimed WLTP range in excess of 750 km (466 miles). Charging can be done at up to 270 kW (thanks to the 800 V charging tech that is already used in production models from Audi and Porsche) and Audi says you regain 300 km (186 miles) in just 10 minutes, or take the state of charge from 5 to 80 percent in 25 minutes.

Performance is also pretty good - Audi says the dash to 100 km/h (62 mph) takes just over four seconds, while its unspecified top speed is limited in order to increase range. Motivation comes from two electric motors that together produce 530 kW (710 bhp) and 960 newton-meters (708 pound-feet) of torque.

The Audi Gransphere will make its public debut at IAA Mobility 2021, the Munich motor show, in a few days’ time and we’ll be there on site to bring you photos and videos right from the venue. 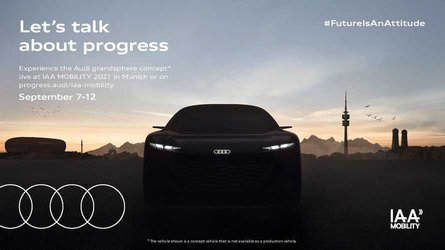 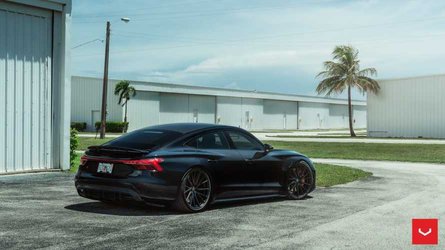 Does The Audi RS E-Tron GT Look Better On These Vossen Wheels?
By: Andrei Nedelea
++
Got a tip for us? Email: tips@insideevs.com