Chrysler has been one of the most neglected brands in the FCA (now Stellantis) stable in recent years, but that looks set to change.

The luxury brand now has only three models on sale in North America, two of which are minivans while the third is the aging 300 sedan.

Mind you, there’s hope for the future of the brand, and Chrysler fans can thank the electric revolution Stellantis announced yesterday for that.

In the long video presentation of its electrification strategy, the Franco-Italo-American carmaker slipped some photos of an intriguing Chrysler luxury EV concept based on the group’s STLA Large platform.

Introduced by Chief Design Officer Ralph Gilles, the concept looks more like a pre-production vehicle than a design study, which suggests we won’t have to wait too long for it to be officially revealed. If it looks familiar, it's because it appears to be an evolution of the Airflow Vision design study unveiled in January 2020.

Gilles says the Stellantis design studios has been working with the STLA Large platform for a while now, and the vehicles based on it “look to be some of the most beautiful cars we’ve designed yet.”

The profile is sporty, with highlights including the “floating roof” design trick, flush door handles, and big, two-tone wheels. There’s no shot of the rear end, but the raked rear screen and horizontal taillights are a given.

The interior is hi-tech and reminds of the Jeep Grand Wagoneer, at least as far as the abundance of digital displays is concerned. The biggest sits at the center of the dash, complementing the fully digital instrument panel behind the steering wheel. The front and rear passengers also benefit from wide screens.

We also know that vehicles underpinned by STLA Large will have batteries ranging from 101 kWh to 118 kWh. In the best-case scenario, the driving range will be 500 miles (700 km). Finally, this platform will be compatible with two electric drive modules (EDM): one with outputs of 125-180 kW and the other with 150-330 kW. 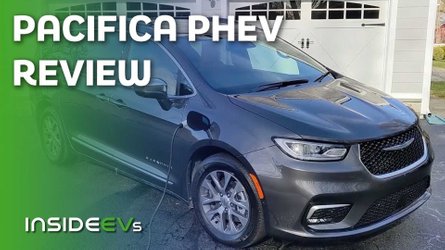 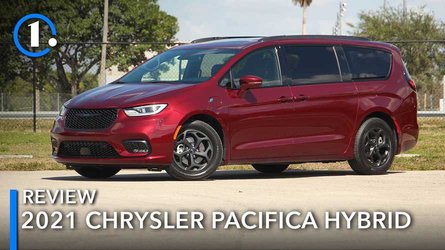 2021 Chrysler Pacifica Hybrid Review: Unplug And Play
By: Dan Mihalascu
++
Got a tip for us? Email: tips@insideevs.com